The 2019 FUFA Awards are edging closer by the day.

Less than a week to the much-anticipated ceremony, the Federation of Ugandan Football (FUFA) has announced the final three nominees for both the Male and Female player of the year.

Headlining the Male category is Allan Okello who is tipped to walk away with the gong.

He won the StarTimes Uganda Premier League, the FUFA Super Cup and the CECAFA Kagame Cup and was part of the Cranes team that qualified for the 2020 Championship of African Nations (CHAN).

Kizza also won the StarTimes Uganda Premier League, the FUFA Super Cup and the CECAFA Kagame Cup and was part of the Cranes team that qualified for the 2020 Championship of African Nations (CHAN).

The three will contest for the honour of being named the best male footballer of the year.

Najjemba was the joint top scorer in the FUFA Women Elite League (2018/19) scoring 14 goals same as Hasifa Nassuna. Top scorer at the 2019 National Secondary Schools’ Championship in Mbale scoring 14 goals. Top scorer at the East Africa Secondary Schools’ Championship in Tanzania, scoring 10 goals. Captained Mukono High School to winning the FUFA Independence Cup, a tournament where she emerged as the top scorer with 4 goals. Was part of the Uganda U17 Girls’ national team that won the COSAFA U17 Championship in Mauritius where scored 12 goals, five behind top scorer and teammate Juliet Nalukenge. Recently, she helped Uganda to finish third at CECAFA Women’s Challenge Cup in Tanzania scoring two goals.

For Nalukenge, she helped Kawempe Muslim to win both the national and East Africa Secondary Schools’ championship. She then captained Uganda to winning the COSAFA U17 Championship and emerging as the tournament top scorer with 18 goals. During the CECAFA Women’s Challenge Cup, she was Uganda’s top scorer with 5 goals. She has scored 53 goals for school, club and country in 2019.

Nassuna, on the other hand, helped UCU Lady Cardinals to win the 2018/19 FUFA Women Elite League. She was named the Most Valuable Player and finished as the overall top scorer with 16 goals. She played a key role to help Uganda finish third at the CECAFA Women’s Challenge Cup, scoring three goals.

FUFA Male Player of the year

FUFA Female player of the year

FUFA Male Coach of the Year 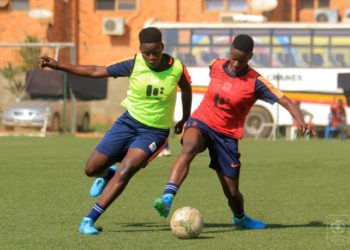