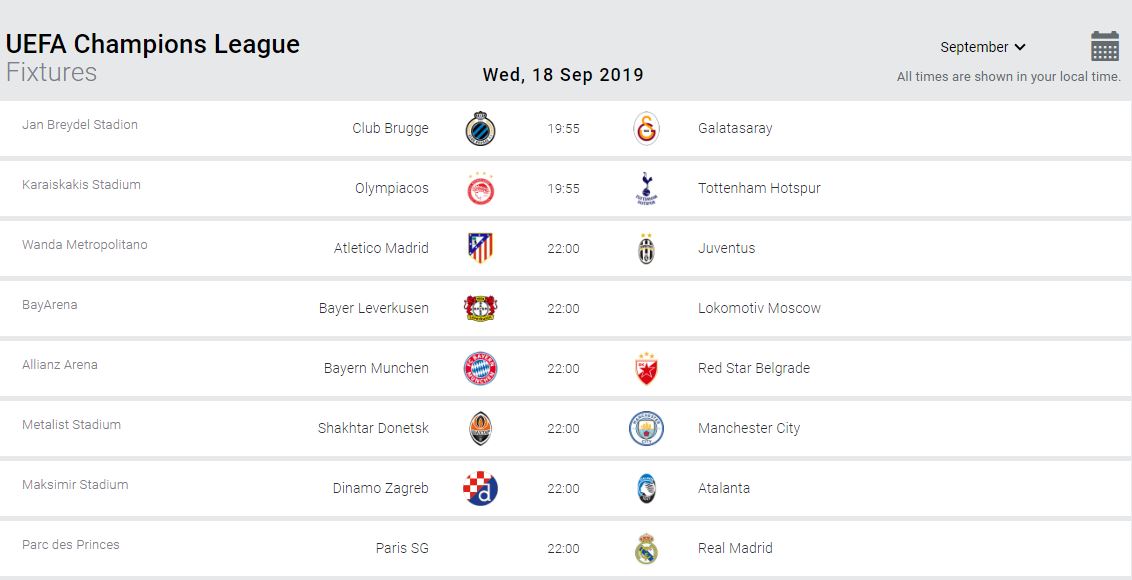 No fewer than 14 players came through the doors at Galatasaray this summer, the most high profile of which was undoubtedly Radamel Falcao. The Colombian has hit the ground running too, scoring the winning goal on his debut at the weekend, and he will most likely lead the line again in this match. However, the visitors will be without Younes Belhanda after suffering a broken jaw last time out, but Mario Lemina – on loan from Southampton – may recover in time after being withdrawn 30 minutes in when he felt unwell and Ryan Donk could feature against his former club.

Brugge’s most notable summer signing also came from England, with goalkeeper Somin Mignolet joining from Champions League holders Liverpool. The hosts largely have Hans Vanaken to thank for getting them to this stage, with the midfielder having scored in three of their four Champions League qualifiers. Philippe Clement will not be able to call upon Mbaye Diagne, though, after he joined Brugge on loan from Galatasaray during the summer despite topping the Super Lig scoring charts with 30 goals last season.

These clubs’ previous meetings were also in the Champions League group stage. Club Brugge have won two of their three previous matches at home to Turkish teams in European competitions and drew the other. Galatasaray have never beaten Belgian opposition in six attempts (lost four, drew two)

Olympiacos boss Pedro Martins will have to do without Kostas Fortunis who is out with a cruciate ligament rupture, as well as center-back Ruben Semedo who is missing with a meniscal injury.

Juan Foyth has returned to full Tottenham training but remained in London ahead of the club’s trip to Athens.  Summer signing Ryan Sessegnon, still yet to make his Spurs debut, has reported irritation with his previous hamstring injury, and also will not feature. Giovani Lo Celso is another to miss out after his injury sustained on international duty.

Olympiakos have met Tottenham Hotspur just twice before in a competitive fixture; these were both in the 1972/73 UEFA Cup, when Spurs won 4-0 at home in the first-leg of their Last 32 tie, before losing 1-0 away in the return leg.

Since 2009-10, Olympiakos have won five of their six European home matches against English opposition (L1), with three wins against Arsenal and one apiece against Manchester United and Burnley. Their only defeat in this run came in a UEFA Champions League Group Stage match versus Arsenal in December 2015 (0-3).

Tottenham Hotspur failed to win any of their Group Stage games away from home in 2018-19 (D2 L1) but won two of the three on the road in the knockout stages on the way to the final; beating Borussia Dortmund and Ajax in the Last 16 and Semi-Final respectively.

Olympiakos are winless in eight Champions League matches (D1 L7), since a 2-1 victory against Dinamo Zagreb in November 2015. It’s their joint-longest winless run in the competition alongside an eight-game run ending in October 2003.

This will be Mauricio Pochettino’s 50th European game as manager of Tottenham Hostpur. Only Bill Nicholson (55) has managed more games in European competition for the club.

PSG are depleted up-front with Neymar Jr suspended and both Edinson Cavani and Kylian Mbappe injured. Centre-back Thilo Kehrer and midfielder Julian Draxler are doubts after sitting out the drama against Strasbourg with foot injuries.

Real Madrid were back in training on Sunday, although Eden Hazard – a debutant the previous evening – is not in the running to play against PSG, according to head coach Zinedin Zidane. The Madrid coach says he will not be returning to France with his most high-profile of the summer in tow, as Hazard has not reached full fitness following a spell on the sidelines. Midfielder Isco, who has been out with a thigh injury, also trained, but will not be ready for Wednesday as he continues the final phase of his recovery. Left-back Marcelo is Zidane’s latest injury victim, having been ruled out of the match with a spinal injury announced by the club on Monday.

This will be the ninth European meeting between Real Madrid and PSG. Los Blancos have won four of the previous eight encounters, while Les Parisiens have come out on top just twice (D2). Real Madrid are unbeaten in their last four meetings with PSG in the Champions League (W3 D1) which came in the 2015-16 and 2017-18 seasons. PSG are unbeaten in 21 successive UEFA Champions League home games at Parc des Princes in the group stage (W15 D6). Their last defeat at this phase of the competition came in 2004 against CSKA Moscow. Real Madrid lost two of their six group stage fixtures last season, which was the most they have lost at this stage of the competition in a single season since 2008-09 (also two). Real Madrid have scored in each of their last 28 Champions League games under Zinedine Zidane.

Niklas Sule and Jerome Boateng will continue at centre-back while Lucas Hernandez will once again deputise for the injured David Alaba at left-back. Thiago Alcantara, however, could be rested, with Corentin Tolisso coming into the side. Philippe Coutinho was surprisingly left out of the starting eleven against Leipzig. He is likely to return in the number ten role, at the expense of Thomas Muller.

Crvena Zvezda came through four qualifying rounds to reach the group stage and they face a tough start as they make the trip to Munich. Tomane is suspended for this match while Gobeljic is an injury concern but otherwise head coach Vladan Milojevic has plenty of options. Ex-Huddersfield winger Van La Parra could feature after making his first start for the club in their 2-1 win over Indjija at the weekend.

This will be the first competitive meeting between Bayern and Crvena Zvezda since October 2007, when the Germans prevailed 3-2 away in Serbia in the UEFA Cup Group Stages. German champions Bayern Munich have scored in each of their last 28 Champions League Group Stage matches at the Allianz Arena, a run stretching back to November 2009. Bayern Munich lost their last Champions League match at home; a 1-3 defeat at the hands of Liverpool in the Round of 16 stages last season. They haven’t lost successive UCL home games since October 2002. Of teams to have played more than 10 Champions League games at home, Bayern Munich have the third-best win ratio in home matches (70%) behind Real Madrid (75%) and Barcelona (74%). This will be Crvena Zvezda’s second participation in the Champions League, having finished fourth in the Group C last season, behind Napoli, PSG and eventually winners Liverpool.

Shakhtar head coach Castro may keep changes to a minimum, although Yevhen Konoplyanka may be preferred to Mateus Martins on the right-hand side of midfield.

The big news for Man City is that John Stones is out for up to five weeks with a muscular issue, adding to their woes in central defence with Aymeric Laporte (knee) also injured. Phil Foden is also sidelined with a virus, but could be available for the weekend, while Leroy Sane (knee) remains a long-term absentee.

This is the third successive season in which Manchester City and Shakhtar Donetsk have been drawn in the same Group of the UEFA Champions League. This is the first time that two teams have been drawn in the same UCL Group in three successive seasons since Real Madrid and Ajax were in 2010-11, 2011-12 and 2012-13. Manchester City have won three of their previous four UEFA Champions League meetings with Shakhtar Donetsk (L1) and have outscored their Ukrainian opponents by 12-2 over the four matches.

Atalanta’s all-Colombian strike force of Duvan Zapata and Luis Muriel have made a flying start to the season with three goals apiece from three games so far, and the duo even combined for one on international duty during Colombia’s 2-2 draw with Brazil – Muriel getting both goals. The summer signing from Sevilla is a doubt for this match due to a knee injury, though, potentially leaving the visitors without one of their key players. There are no other injury concerns for Atalanta, with Timothy Castagne returning to the bench on Saturday after a meniscus problem.

Zagreb have a clean bill of health, meanwhile, and will be looking to Dani Olmo, who was linked with some of Europe’s biggest clubs after starring at the Under-21 European Championships this summer, to provide their main attacking thrust.

The previous meetings between these clubs were in the UEFA Cup first round, with Atalanta winning two more ties before losing their quarter-final against Inter Milan. This is Atalanta’s first ever match in the Champions League or European Cup. Dinamo Zagreb have lost 22 of their last 24 games in the Champions League group stage

Goalkeeper Jan Oblak is regarded as a doubt for Atletico having been withdrawn from the game with Real Sociedad due to a head injury. Alvaro Morata and Thomas Partey are both expected to miss the game with knee and hamstring injuries respectively.

Each of Douglas Costa, Miralem Pjanic and Danilo are unlikely to feature for Juventus on Wednesday evening after they all suffered injuries against Fiorentina. The triple blow leaves Sarri with issues at right-back, with Juan Cuadrado potentially being used as a make-shift replacement.

Leverkusen come into this game off the back of a 4-0 loss at Dortmund so preparations for this Champions League opener have not been ideal. Demirbay is carrying a knock ahead of this match which makes him doubtful so Baumgartlinger could step into a central midfield role for him. Coach Peter Bosz may contemplate a change in defence after the poor performance so that could see Dragovic come into contention here.

Lokomotiv warmed up for this Champions League opener in Germany by producing a solid display in beating Sochi 1-0 at the weekend. Yuri Semin will be expecting a similarly stout defensive display here but he may be without Howedes who is doubtful so Murilo may come in. Anton Miranchuk is another doubt here so if he fails a fitness test, then Eder or the more defensive Rybus could come into the starting XI.

These teams are the definite outsiders to qualify from Champions League Group D, but Bayer Leverkusen are hot favourites to get an early three points on the board when they host Lokomotiv Moscow. Atletico Madrid and Juventus meet in Wednesday’s other match-day one fixture in this pool and while at least one of that high-quality duo is certain to drop points, they will be expected to make up any ground lost and finish in the top two of the standings come December. But Leverkusen can give themselves the perfect start by making it eight straight defeats for Lokomotiv against German opposition, although Die Werkself will not be pleased at the way their three-match winning start to this season has ended in their last couple of games. Peter Bosz’s side were held 0-0 at home by Hoffenheim and then suffered a 4-0 drubbing away to Borussia Dortmund on Saturday when their hosts produced a clinical display of counter-attacking football. Like Leverkusen, Lokomotiv gained direct entry to the group stage of this competition after finishing runners-up in the Russian league last season and their form, especially away from home, has been fairly solid this term.