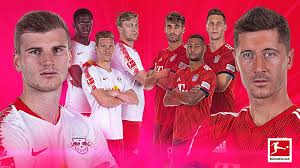 The German Bundesliga has been dominated by Bayern in the recent past and if things stay the way they are, the Bavarians are poised to win it again this season.

Going into Match-Day 33 of the 2018/19 season, Bayern hold a 4 point advantage at the top of the log and a win on Saturday, will see them crowned champions for the 29th time in history.

In their way, however, stands a RB Leipzig side that has not lost a League game since January 19th.

During that period, Ralf Rangnick’s side have won 10 of their 14 games and moved to within 9 points of the top of the table.

With one of the best striking duos in German football at the moment, Timo Werner and Yussuf Poulsen, Leipzig have it in them to trouble even the best in the division.

At the Red Bull Arena, where they will host Bayern, Leipzig have lost only one Bundesliga game this season, the 1-0 loss to Borussia Dortmund in January. It will take some beating to defeat them at home for a second time this campaign.

For Bayern, they picked form at the right time and are currently marching towards the title on the back of a 9 match unbeaten run, winning 7 games along the way.

Last weekend, they powered past Hannover 3-1 at the Allianz Arena, their 23rd victory of the season.

Saturday’s game promises to be a thrilling encounter, one Bayern can lose but in the end, will most definitely win the League on last day.

As Bayern are at Leipzig, second placed Dortmund will also have their hands full with the visit of Fortuna Dusseldorf.

Dortmund have fallen 4 points behind Bayern all because of themselves. Tomas Tuchel’s side who at one point looked to be cruising to a first title since 2012, have not won in any of their last two games, losing 2-4 at home to Schalke 04 and then throwing away a 2-0 lead to draw 2-2 at Werder Bremen.

Still without the suspended Marco Rues and Marius Wolf, Dortmund will head into the game knowing defeat will hand Bayern the title.

Dusseldorf on the other hand have nothing to play for in the season. Currently sitting 10th on the standings, Friedhelm Funkel’s side were held to a disappointing 1-1 draw away to 10 man Freigburg last week.

With all that said, Dortmund are clear favourites for this one as they have not lost at home to Dusseldorf since 1986.

With 8 of the 9 Match-Day 37 fixtures all kicking off at 4:30pm on Saturday, the other mouthwatering fixture to look out for will be Hoffenheim hosting Werder Bremen.

Hoffenheim who sit 8th have endured a slip in form in the last two weeks, collecting only a single point out of a possible six. Consequently, they have dropped three points off the final Champions League spot and cannot afford any more slip ups.

Saturday’s opponents Bremen also still have their sights set on European football as a string of favourable results can see them qualify for the Europa League.

At the start of the day, Bremen sit 5 points of the final Europa League spot and with the sides above them exhibiting inconsistency, they cannot dare take the foot off the gas peddle.

In the game that will be played on Sunday, Eintracht Frankfurt will be hoping to put their Europa League semifinal exit behind them and concentrate on securing the final available Champions League spot.

Currently in 4th, level on points with fifth placed Bayer Leverkusen but with a superior goal difference, Frankfurt will be at home to Mainz at the Commerzbank Arena.

Mainz have nothing to play for this season as they already secured their Bundesliga status but with French striker Jean Philippe Mateta leading their attack, they are very much capable of causing Frankfurt problems.

The other Bundesliga fixtures to look out for this weekend will be Bayer Leverkusen at home to Schalke 04 and Nuremberg hosting Borussia Monchengladbach.

The German Bundesliga fixtures this weekend