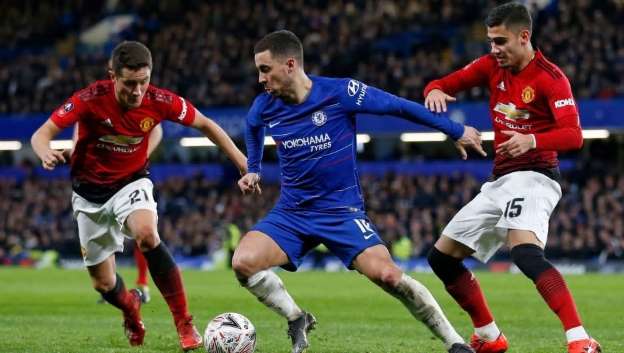 Liverpool midfielders Fabinho and Adam Lallana face fitness tests ahead of Friday’s match against Huddersfield. Fabinho sustained a head injury during Sunday’s win at Cardiff, while Lallana has been out for five weeks with a muscle issue.

Central defender Dejan Lovren is expected to be available after illness. Huddersfield’s Adama Diakhaby is in contention after a hamstring injury but Aaron Mooy is a doubt and Laurent Depoitre remains out.

Liverpool are unbeaten in 13 meetings since a 1-0 defeat 60 years ago (W10, D3). Huddersfield have gone eight games without scoring against Liverpool. Their most recent goal came in a 1-1 draw at Anfield in the Second Division in April 1962.

Liverpool could win 10 consecutive matches in all competitions for the first time since a run of 11 in a row under Rafael Benítez from March to May 2006. Their tally of 88 points is a Premier League club record. The most points earned by a team finishing as Premier League runners-up is 89 by Manchester United in 2011-12. They were beaten to the title by Manchester City on goal difference. Liverpool have gone 38 Premier League fixtures without defeat at Anfield, the division’s second longest unbeaten home run behind Chelsea’s 86-match streak. Victory would give the Reds 50 home points in a Premier League season for the first time. Liverpool’s 13 goals from corners is a league-high. Trent Alexander-Arnold’s assist against Cardiff was his 10th of the season, seven of which have come in the last 11 matches. Sadio Mane has scored nine goals in his past eight Premier League appearances at Anfield.

Tottenham are hopeful that Dele Alli and Danny Rose will both overcome minor injuries sustained in midweek. Harry Winks and Erik Lamela remain doubts, while Moussa Sissoko, Serge Aurier and Harry Kane are still out.

West Ham trio Javier Hernandez, Manuel Lanzini and Aaron Cresswell all face fitness tests after recent injuries. Jack Wilshere is again likely to be named as a substitute as he continues his latest comeback, but Samir Nasri is expected to miss out once more.

This will be the third meeting in league and cup this season, with Tottenham winning both prior matches. Spurs are looking to complete their first league double over West Ham since 2012-13. West Ham’s only Premier League away victory at Spurs in the past 16 attempts was by a 3-0 scoreline in October 2013 (D6, L9).

Spurs have won all four matches at their new stadium without conceding a goal. They could keep five consecutive home clean sheets in all competitions for the second time under Mauricio Pochettino, having done so from January to February last year at Wembley. The Lilywhites are unbeaten in nine home games, winning eight of them, including fixtures played at Wembley. Tottenham have won all nine home matches against sides currently in the bottom half of the table by an aggregate score of 21-2. Their tally of 19 points in London derbies this season equals the Premier League club record. Mauricio Pochettino is unbeaten in all six home league games as a manager against West Ham (W2, D4).

Crystal Palace are weighing up whether to recall Patrick van Aanholt or stick with Joel Ward at left-back. Pape Soaure is out with a minor knock and joins James Tomkins, Mamadou Sakho and Jeffrey Schlupp on the sidelines.

Richarlison is a major doubt for Everton because of the rib injury he sustained against Manchester United. Lucas Digne and Yerry Mina have been passed fit but Theo Walcott is struggling with sickness and Andre Gomes remains suspended.

Everton are unbeaten in eight meetings since a 3-2 home defeat in September 2014 (W4, D4). Crystal Palace have won only one of nine previous Premier League home matches against Everton and scored just five goals.

Fulham defender Alfie Mawson is in contention to play for the first time since sustaining a knee injury while putting on his boots in late December. Tom Cairney should be available after missing out last weekend following the birth of his child, but Andre Schurrle could be absent for the same reason.

Cardiff midfielder Joe Ralls tore his hamstring against Liverpool last week and will not play again this season. Harry Arter has been nursing a calf strain and will be assessed.

Fulham suffered their first defeat in eight meetings in all competitions last October when Cardiff won the reverse fixture 4-2. Cardiff have won all three Premier League meetings, including by a 2-1 scoreline at Craven Cottage in 2013. The Bluebirds have scored in 19 successive league matches against Fulham since a 2-0 away defeat in the third tier 30 years ago.

Ryan Bertrand is at risk of missing out for Southampton because of an ankle problem, although Matt Targett has resumed full training and could deputise at left-back. Stuart Armstrong faces a fitness test on a hamstring problem.

Bournemouth have never won away against Southampton in 14 attempts, drawing five times and losing nine. Southampton’s only defeat in the past 11 encounters came away in the Premier League three years ago (W6, D4).

Watford are again without captain Troy Deeney, who serves the final game of a three-match suspension. Jose Holebas, Tom Cleverley and Adalberto Penaranda have all been declared fit but Sebastian Prodl and Domingos Quina remain out.

Wolves head coach Nuno Espirito Santo has a fully-fit squad at his disposal. Morgan Gibbs-White and Ivan Cavaleiro are among those pushing for a recall should changes be made to the side that beat Arsenal on Wednesday.

This fixture comes 20 days after Watford beat Wolves 3-2 in extra-time in their FA Cup semi-final. Watford are looking to complete the league double over Wolves for just the second time, having done so in 2007-08. Wolves are yet to score in three previous top-flight meetings, including October’s 2-0 defeat in the reverse fixture.

Winger Anthony Knockaert is available for Brighton after completing a three-match suspension. Davy Propper is again ruled out with a hamstring problem.

Newcastle captain Jamaal Lascelles is ill and will not be involved, while Miguel Almiron will miss the remainder of the season because of a hamstring injury. Fabian Schar and Isaac Hayden, who were substituted with minor injuries last weekend, should both be fit.

Newcastle have failed to score in all three Premier League meetings, losing 0-1 twice and drawing the other game 0-0. Brighton won at St James’ Park in October and are looking to complete the league double over Newcastle for the first time since 1978-79.

Leicester boss Brendan Rodgers has no new injury concerns, with long-term absente Daniel Amartey the only player unavailable. Captain Wes Morgan is back in contention after missing the last game for personal reasons.

Leicester’s 3-1 victory at home last season is their only success in the past 24 Premier League meetings (D7, L16). Arsenal have not lost consecutive away league games against Leicester since defeats there in 1981 and 1983.

Arsenal have never lost a Premier League game that has kicked off at midday, winning 15 such matches and drawing four. They could lose three successive top-flight matches for the first time in 13 months. The Gunners are also at risk of conceding at least three goals in three consecutive top-flight matches for the first time since 1967. They have kept just two clean sheets in their last 27 Premier League away games, a sequence spanning 16 months. Gunners boss Unai Emery faced Brendan Rodgers twice in last season’s Champions League group stage, with Emery’s Paris St-Germain side beating Rodgers’ Celtic 7-1 at home and 5-0 away.

Burnley have reported no new injury concerns and could name the same team for a fourth straight match. Peter Crouch, Steven Defour and Aaron Lennon remain out, while Phil Bardsley is doubtful with a gashed leg that has sidelined him for the last three games.

Manchester City will assess Fernandinho, who was forced off against Manchester United with a knee problem. City will hope that fellow midfielder Ilkay Gundogan, who suffered a knock in Wednesday’s derby, is available. Kevin de Bruyne remains out with a muscle injury.

Manchester City are unbeaten in their last seven league and cup games against Burnley, winning six of those matches. City have only won one of their past three games at Turf Moor (D1, L1), and have failed to keep a clean sheet in any of their four Premier League matches there. The champions have beaten Burnley 5-0 twice this season in all competitions – no team has ever scored five goals against the same opponent three times in a single season in English league history. Seventeen of City’s last 22 league and cup goals against Burnley have come in the second half of matches, including eight of 10 this season.

Pep Guardiola’s side have won 11 straight league games, the longest streak in the Premier League this season. They can become the first team to end a top-flight season with 14 consecutive victories, breaking Arsenal’s record of 13 in 2001-02. City have won all 12 of their league matches this season against sides in the bottom seven (prior to the weekend’s matches), scoring a total of 41 goals and conceding just four. Sergio Aguero has scored eight goals in his last seven appearances against Burnley in all competitions. Aguero is one short of becoming the second player to score at least 20 Premier League goals in six different seasons, emulating Alan Shearer (who did so in seven campaigns). Aguero could also become the second player, after Thierry Henry, to achieve this feat in five consecutive seasons.

Manchester United midfielder Ander Herrera could return after missing six games with a hamstring injury. Phil Jones and Scott McTominay missed out in midweek and are doubtful for Sunday’s game, but David de Gea will keep his place despite recent errors.

Chelsea winger Callum Hudson-Odoi is out for the rest of the season after rupturing his Achilles against Burnley. N’Golo Kante is a doubt after being forced off against the Clarets because of a rib injury. Antonio Rudiger missed that game with a knee injury but is available to return on Sunday.

Manchester United can win three consecutive top-flight home games against Chelsea for the first time since 1957. The Londoners have won 18 Premier League matches against United, more than any other side has managed. Chelsea’s six Premier League wins at Old Trafford have come under six different bosses, with five of those victories being the manager’s first league game there with the Blues.

United have lost seven of their past nine competitive games for the first time since September to October 1962. That sequence ended on the weekend the Cuban Missile Crisis was resolved. They could lose back-to-back Premier League home matches for just the fifth time. It last happened in March 2014, during David Moyes’ tenure. The Red Devils have failed to score in their last three fixtures – they have not gone four matches without a goal since October to November 1992. Manchester United have played 527 minutes in all competitions since their last goal from open play, scored by Scott McTominay against Wolves. They have gone 12 matches in all competitions without a clean sheet, the club’s longest run since a 16-game streak in 1970.

Chelsea have lost six of their seven Premier League fixtures away to sides in the top half of the table this season, with the exception a 2-1 win at Watford on Boxing Day. They are winless in eight league games away to the other clubs from the established top six since beating Tottenham at Wembley in August 2017 (D2, L6). The Blues have won just two of 11 top-flight games this season after conceding the opening goal (D2, L7), with both victories coming against Cardiff. Gonzalo Higuain’s four goals for Chelsea have come against teams currently in the bottom six. He’s played five games and 323 minutes against the top-six sides in all competitions, managing just one shot on target. Kepa Arrizabalaga and Ross Barkley could both make their 50th appearance for the club in all competitions.