WAKISO – Barely a week after securing the services of defender Hassan Wasswa Dazo until, Wakiso Giants have extended the stay of another of their most important players.

The player in question is versatile midfielder Ayub Kisalita.

Like Dazo, Kisalita has extended his stay with the Wakiso based side until June 2022.

Kisalita joined the club in 2018 from Express FC and has made over 17 appearances in all competitions for Wakiso this season.

At one point in his career, he was tagged as the future of Uganda’s defence and holding midfield but sadly, Kisalita has failed to live up to the expectations.

“I’m very happy with everything that involves the club, my teammates, the staff and the management team, said Kisaliita after signing the new contract at Wakiso.

“This was the main reason I signed.

“I’m very happy because they have treated me very well since the first day I got here and am looking for many more seasons here.

Kisaliita who started out his career as a right back believes the team can do great things and is looking forward to helping them gain promotion.

“We have a good team so we just need to be focused and if we are at 100%, we have lots of chances to do great things starting with helping the team to gain promotion.

Kisalita is expected to be in action when Wakiso hosts Entebbe FC on Thursday next week.

Wakiso is currently leading the Elgon Group of the 2018/19 FUFA Big League, by 5 points and require only two more so as to reach the top flight next season. 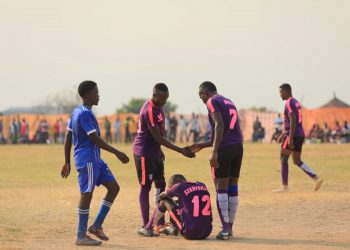