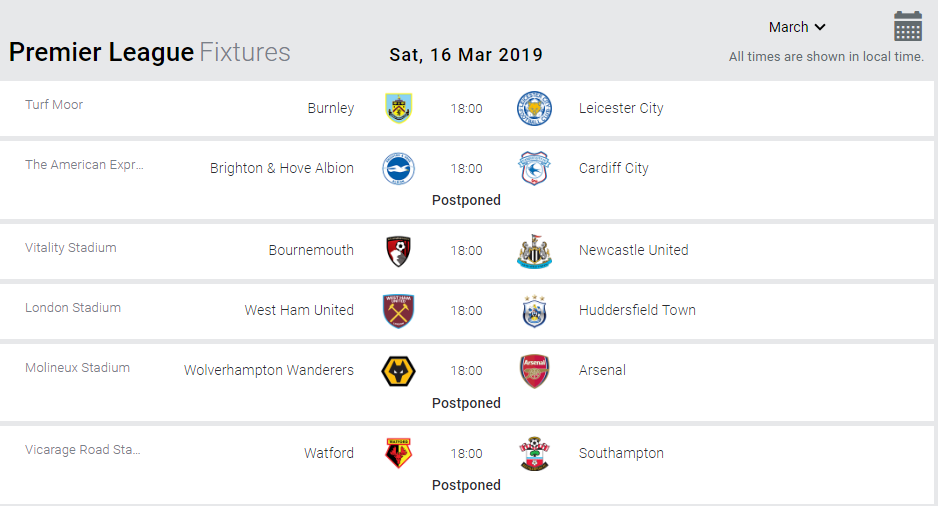 Bournemouth full-back Adam Smith will miss out with a hamstring strain, so Nathaniel Clyne is likely to deputise. Ryan Fraser should be fit despite missing training earlier this week after suffering some heavy challenges against Huddersfield.

Newcastle captain Jamaal Lascelles is sidelined by a knee problem, but Ciaran Clark makes a timely return from a similar injury. Fabian Schar is banned for two matches after accumulating 10 bookings.

Newcastle are unbeaten in three league and cup visits to Bournemouth since a 2-1 defeat in the second tier in September 1989. The only home win in five Premier League meetings was registered by Newcastle in this season’s reverse fixture.

Their tally of 25 points at home is the most this season among clubs outside the top six. The Cherries only need a point to match last season’s final total of 26 at the Vitality Stadium. All seven of Bournemouth’s home league defeats since losing to Burnley in November 2017 have come against established top-six sides. Callum Wilson is vying to score in four consecutive league appearances for the first time since October 2014 in the Championship. Wilson and Ryan Fraser have combined for nine Premier League goals this season – the last pair to do so 10 times in a single top-flight campaign were Arsenal’s Nicolas Anelka and Dennis Bergkamp 20 years ago. Fraser is the first Scottish player to register 10 assists in a single Premier League season. Joshua King has scored four goals in his last four league games at home.

Newcastle are winless in six away matches, earning just two points. The Magpies have lost seven consecutive Premier League away games in March without scoring since a 4-1 victory at Hull City in 2014. They have only scored 11 goals in 17 Premier League away fixtures since last April. Six-goal Ayoze Perez is the highest scorer in the division this season yet to score away from home. Salomon Rondon has been involved in 13 Premier League goals for Newcastle this season (eight goals, five assists) – five more than any other player. Jonjo Shelvey’s next league appearance will be his 100th for Newcastle.

Burnley manager Sean Dyche has no fresh injury worries and could name the same side for the third successive match. Aaron Lennon may yet return from knee surgery before the end of the season but Steven Defour is likely to have to wait until next term.

Leicester City could also be unchanged for Saturday’s trip to Turf Moor. Winger Marc Albrighton, midfielder Matty James and the versatile Daniel Amartey are all unlikely to feature again this season because of injuries.

Burnley have earned successive Premier League home victories against Leicester – they’ve never won three in a row against an opponent at Turf Moor in the competition. They are Leicester’s only two defeats in the 14 most recent meetings (W8, D4, L2). This is the 50th top-flight meeting. Burnley have won 22 and Leicester 13, with 14 draws.

Burnley could equal the club record of four consecutive Premier League defeats. They have the joint-second worst defensive record in the division this season, conceding 57 goals. The Clarets are one short of scoring 100 Premier League home goals. There have been a league-high 12 goals scored in the 90th minute or later in Burnley’s games this season, with Sean Dyche’s side scoring three and conceding nine. Ashley Barnes could become the first Burnley player to score in four successive Premier League matches at Turf Moor.

Leicester have won two of their last three league games, more than they had in their final eight under Claude Puel (W1, D1, L6). The 12 goals they have conceded in the opening 15 minutes of matches this season is the most in the division. The Foxes have let in the opening goal in 20 Premier League fixtures this season, a joint-high with the bottom three sides. Leicester are without a clean sheet in nine matches since a 1-0 win at Everton on New Year’s Day. Brendan Rodgers has won four of his five league meetings with Burnley, beating them while in charge at Watford, Swansea and Liverpool. He has never beaten a team with four different clubs. Jamie Vardy has scored five goals in as many league games – one more than he had in his previous 16 appearances.

West Ham striker Andy Carroll could be out until the end of the season because of an ankle injury. Marko Arnautovic, who is back to full fitness after illness, could start after two appearances off the bench.

Erik Durm is the latest doubt for injury-hit Huddersfield, having picked up a minor strain in training. Fellow defender Tommy Smith returns after three games out with suspension, although Christopher Schindler will retain the captaincy.

West Ham are unbeaten at home in all competitions in 2019 (W4, D2). The Hammers have kept just three Premier League clean sheets at the London Stadium this season. Only Manchester United and Fulham have fewer at home. West Ham are looking to win three consecutive league games at the London Stadium for the first time. They have earned 39 points this season, only three fewer than their final total in 2017-18. Six of West Ham’s last seven Premier League goals have come from a set-piece. The club’s eight-goal leading league scorer Felipe Anderson has not added to his tally in his last 11 league games.

Huddersfield have lost seven of their last eight league matches. The Terriers have scored eight goals away from home, the lowest tally in the division. Huddersfield have failed to score in five successive away games in the Premier League since Boxing Day. They have used 29 players in this season’s Premier League, the joint-highest number. Steve Mounie has been directly involved in four of Huddersfield’s last five Premier League goals, scoring twice and assisting twice.

Fulham have lost five consecutive league games against Liverpool, conceding 16 goals, since a 1-0 win at Anfield in May 2012. Liverpool could win three matches in a row at Craven Cottage for the first time in the top flight. There has not been a draw between the sides in 13 Premier League meetings at Craven Cottage.

Fulham have no new injury concerns and forward Andre Schurrle is training again after a virus. Alfie Mawson is recovering from knee surgery and hopes to be back playing before the end of the season.

Liverpool captain Jordan Henderson is out of the game because of an ankle injury sustained in the Champions League victory over Bayern Munich. Naby Keita will be assessed after missing the trip to Germany with a minor injury.

Liverpool have equalled their best record after 30 matches of a top-flight campaign, set in 1987-88 (W22, D7, L1). They went on to win the title by nine points that season. They have won only one of their five Premier League away games in 2019, compared to eight victories in 10 attempts before the turn of the year. The Reds have conceded nine goals in 10 league fixtures in 2019, one more than they had in the previous 20 games this season. Jurgen Klopp’s side are unbeaten in their last 11 league matches against promoted sides (W10, D1), scoring 31 goals and conceding just four. Sadio Mane has scored eight goals in his last eight league appearances, though just one of these has come away from Anfield.

Everton’s Seamus Coleman is set to return after missing the defeat at Newcastle because of illness. Leighton Baines is also in contention after a back issue but Phil Jagielka is an injury doubt while Kurt Zouma is ineligible against his parent club.

Gonzalo Higuain could be available again after missing the midweek trip to Dynamo Kiev with illness. The likes of Cesar Azpilicueta, David Luiz, and Eden Hazard, who were rested in midweek, are set to return.

The past two league meetings have ended 0-0. Only four fixtures in Premier League history have finished goalless in three consecutive games. Everton haven’t scored in any of their last five league matches against Chelsea (D2, L3). The Toffees have won only one of the last 10 Premier League encounters (D3, L6).

Everton have lost four of their last six league games (W1, D1). It’s seven games and more than two months since they last won at home (D3, L4). Everton have not beaten one of the established top-six sides in the league since January 2017, drawing seven and losing 18. Their last seven Premier League goals at Goodison Park have been scored by different players. Theo Walcott has scored six goals in all competitions against Chelsea, finding the net at all four grounds he has faced them on. He is yet to play them at Goodison Park. Jordan Pickford is one short of 100 Premier League appearances.

Chelsea have won three of their last five league matches (D1, L1). They have lost three of their last four away games in the Premier League, conceding 12 goals in those three defeats. The Blues have kept only one clean sheet in their last nine away league matches, in a 1-0 triumph at Crystal Palace on 30 December. Chelsea have 57 points after 29 Premier League matches, four more than they had at this stage of last season under Antonio Conte. Eden Hazard has been directly involved in 24 (48%) of Chelsea’s 50 Premier League goals this season (13 goals, 11 assists), the highest ratio in the division. Chelsea have hit the woodwork 19 times this season, more than any other side in the top flight. Marcos Alonso and Willian have both hit the woodwork six times each. They are the only club not to have received a red card in this season’s Premier League.