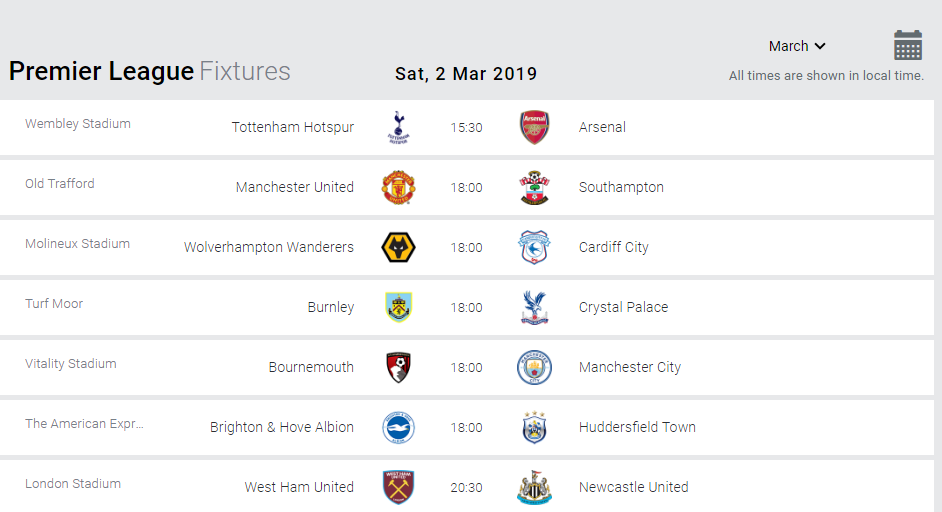 Arsenal head coach Unai Emery expects Laurent Koscielny to recover in time from the knee injury he suffered late on against Bournemouth. Stephan Lichtsteiner returns from a back problem, while Ainsley Maitland-Niles is available after illness.

Spurs are vying to register three consecutive top-flight home wins against Arsenal for the first time since 1961. Arsenal’s only away league victory in this fixture in the past 10 attempts came in March 2014, courtesy of Tomas Rosicky’s early goal (D3, L6). They have met 197 times in all competitions, with Arsenal leading by 82 wins to Tottenham’s 64.

Spurs are in danger of losing three consecutive Premier League games for the first time since November 2012 – when the third defeat came against Arsenal. They have gone a Premier League record 32 consecutive fixtures without a draw since April. It’s the longest top-flight run since Portsmouth’s 38-game streak in 1928-29. Tottenham have lost five of their seven league matches against other established top-six teams this season. Mauricio Pochettino has never lost a Premier League home game against Arsenal, winning three and drawing two. Harry Kane has scored eight goals in eight Premier League meetings between Spurs and Arsenal, a joint-record in the division along with Emmanuel Adebayor. Son Heung-min has scored in each of Tottenham’s last four home matches in all competitions. Pochettino and Toby Alderweireld both celebrate their birthday on the day of this game.

Arsenal have won five of their past six league games, as many as they managed in their previous 13. They earned a first league away victory in seven attempts at the expense of Huddersfield in their most recent game on the road. Arsenal are winless in 21 Premier League away fixtures against other established top six teams since beating Manchester City 2-0 in January 2015 (D7, L14). They are the only club not to have kept a Premier League away clean sheet in 2018-19. Pierre-Emerick Aubameyang has scored an unrivalled six league goals in London derbies this season. Henrikh Mkhitaryan has scored four goals and provided three assists in his last four league appearances.

Bournemouth forward Callum Wilson could be available after a six-week lay-off with a knee injury. David Brooks was an unused substitute in midweek on his return from an ankle problem, but Jefferson Lerma is banned and Steve Cook, Dominic Solanke and Junior Stanislas remain sidelined.

Manchester City pair John Stones and Gabriel Jesus are fit after missing the past three games with muscle injuries. Aymeric Laporte and Fernandinho remain out, along with Fabian Delph. Left-back Benjamin Mendy was on the bench against West Ham after overcoming his latest knee injury.

Manchester City are unbeaten in all 13 meetings, winning the seven Premier League fixtures by an aggregate score of 24-3. The Cherries have only avoided defeat in one of their six home games against City, a goalless draw in the third tier 20 years ago. Bournemouth’s only goal at home in those six matches came from Charlie Daniels in a 2-1 defeat last season.

Pep Guardiola’s side have won three successive league games without conceding. They last managed four wins with clean sheets in September 2017. City have lost three of their past six Premier League away games, as many defeats as in their previous 35. They have dropped 16 points this season – already two more than in the whole of 2017-18. Three of their four league defeats this season have come after scoring the opening goal. Raheem Sterling has scored in all six Premier League appearances against Bournemouth. Sergio Aguero is the Premier League’s top scorer this season with 18 goals, but only three have come away from home.

Brighton will be without influential midfielder Pascal Gross, who has a minor hamstring strain. Leon Balogun remains out with a shoulder problem but Florin Andone is back after serving a suspension.

Huddersfield trio Isaac Mbenza, Adama Diakhaby and Danny Williams remain out, while Tommy Smith sits out the second game of a three-match ban. Demeaco Duhaney is nursing a thigh strain so Juninho Bacuna, who replaced him in midweek, may start.

Brighton have won five and lost just two of the past 13 meetings. Huddersfield have never won in six visits to the Amex Stadium (D3, L3). Their most recent victory at Brighton was in League One at the Withdean Stadium in April 2011.

Burnley are boosted by the return of Ashley Westwood, who missed the defeat at Newcastle because of illness. Aaron Lennon is back in light training but Jonathan Walters and Steven Defour remain long-term absentees.

Crystal Palace have right-back Aaron Wan-Bissaka available following three games out with a hamstring injury, while Pape Souare is nearing a return. French defender Mamadou Sakho has had surgery on his injured knee and is set to be sidelined for several weeks.

Crystal Palace have won the past two meetings, including 2-0 in December’s reverse fixture. Palace’s solitary victory in their last 10 league visits to Turf Moor was by 3-2 in January 2015. There have been 20 goals in the five top-flight fixtures between the clubs at Turf Moor.

Manchester United forward Marcus Rashford is likely to start on Saturday after an ankle injury restricted him to a substitute appearance in midweek. Anthony Martial, who has been out with a groin injury, has an outside chance of featuring.

Southampton forward Danny Ings will miss a fourth consecutive match because of a hamstring problem. Michael Obafemi has been ruled out for the season, while Mario Lemina remains sidelined by an abdominal complaint.

Three of the past four league meetings have ended in a draw. Manchester United fought back from 2-0 down to earn a draw in the reverse fixture in December. United have come from behind to win eight Premier League matches against Southampton, a joint-high in the competition.

United have won nine of their 11 league games under Ole Gunnar Solskjaer, drawing the other two. Since Solskjaer took charge, United have won 29 points, at least five more than any other top-flight side. However, they haven’t won any of their last three home matches in all competitions (D2, L1). They could fail to score in three consecutive home games for the first time since October 1989. Manchester United have kept just two clean sheets at Old Trafford in this season’s Premier League – only Fulham have a worse home record. Romelu Lukaku has scored seven goals in his last 10 Premier League appearances against Southampton. Only two of Lukaku’s past 11 league goals were scored at Old Trafford.

Wolves goalkeeper John Ruddy will make his first league start of the season to help prepare him for the FA Cup quarter-final later this month. Defender Ryan Bennett is currently on nine yellow cards, so one more would trigger a two-match ban.

Cardiff’s Victor Camarasa is finally fit after a calf problem. Oumar Niasse returns after being ineligible to face parent club Everton in midweek, while Joe Ralls, who missed the game with a pelvic problem, is fit. Harry Arter and Callum Paterson could both return after being rested in midweek.

Cardiff came from behind to win 2-1 in their first Premier League meeting last November. Wolves have lost on three of the last five occasions they have hosted Cardiff. The away team is winless in each of the last 22 Premier League fixtures between two promoted teams since Leicester City beat Burnley in April 2015.

West Ham forward Marko Arnautovic is ready to play after illness, and defenders Aaron Cresswell and Arthur Masuaku are also fit again. Javier Hernandez is one of the players poised to return after being rested in midweek but Fabian Balbuena is not ready to return from a knee injury.

Newcastle have no new injury problems. Jonjo Shelvey has requested to play with the reserves on Friday night to improve his match fitness while he battles to regain his place. Goalkeeper Rob Elliot and defender Ciaran Clark remain sidelined with respective back and knee injuries.

West Ham won 3-0 earlier this season and are looking to complete a league double over Newcastle for the first time since the 1998-99 season.

Watford defender Jose Holebas is available following suspension, while Miguel Britos has recovered from illness. Full-back Kiko Femenia was due to return after six weeks out with a thigh injury but he missed training on Friday as he was sick.

New Leicester City manager Brendan Rodgers is expected to keep faith with much of the side who beat Brighton. Daniel Armartey and Marc Albrighton remain out.

A third successive victory against Leicester at Vicarage Road would equal Watford’s longest top-flight home winning streak versus a single opponent. However, Leicester could win three consecutive league meetings for the first time since August 1999. Since Watford’s return to the Premier League in 2015-16, this fixture has seen a league-high five penalties awarded.

Fulham forward Andre Schurrle, who scored a hat-trick for Chelsea at Craven Cottage in 2014, is a doubt to face his former club due to illness. Long-term absentees Alfie Mawson and Marcus Bettinelli remain out.

This is the 50th top-flight fixture between Fulham and Chelsea. The Cottagers have won only three of the previous 49 (D16, L30). Fulham’s current run of 17 games without victory versus Chelsea is their longest top-flight winless streak against any opponent.

Everton are expected to welcome back midfielder Andre Gomes, who was rested for the win at Cardiff. Leighton Baines is the Toffees’ only absentee with the rib injury that has ruled him out for a month.

Liverpool are hopeful that Roberto Firmino will be fit to return from the ankle problem that caused him to miss Wednesday’s victory against Watford. Defender Dejan Lovren could be back in contention when Liverpool host Burnley next weekend.

This becomes only the second fixture to be played 200 times in the top flight, after Everton against Aston Villa. The Toffees are winless in the past 18 meetings in all competitions (D9, L9), their longest run without a Merseyside derby victory. Everton’s most recent Merseyside derby win was 2-0 at home in the Premier League in October 2010. Liverpool have scored five 90th-minute winning Premier League goals against Everton, a competition record against a single opponent.

Liverpool’s return of 69 points is already more than their total tally in 16 Premier League seasons. The seven previous sides to have amassed 69 points after 28 games have won the league title. Their 5-0 win against Watford was just a second victory in five Premier League games, having drawn the other three. The Reds have conceded a league-low eight away goals this season. Mo Salah has scored 49 goals in 64 Premier League games for Liverpool. A goal in this game would make him the quickest player to score 50 goals for one club in the competition’s history. Sadio Mane’s 14 Premier League goals is his best return for a single campaign. He has scored six goals in his last six league games. Jurgen Klopp is unbeaten in seven meetings with Everton in all competitions (W5, D2). Only Bob Paisley (10) and David Ashworth (8) have enjoyed a longer unbeaten start against the Toffees.