Messiless Barcelona host Madrid in first ‘Classico’ of the season 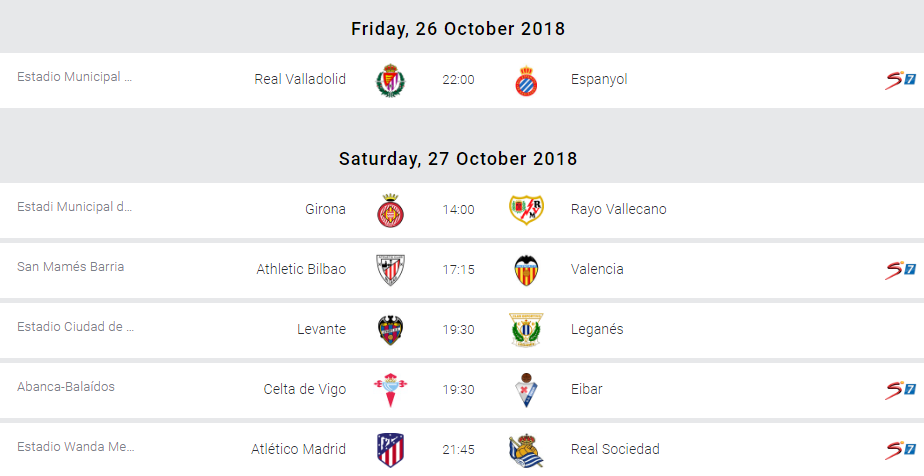 Real Valladolid have taken 12 points from their last four games. The hosts have also kept three successive clean sheets. For Espanyol, they have a chance to temporarily go top of La Liga with three points on Friday evening after an impressive start to the season that has seen them sit two points behind leaders Barcelona after nine games.

Kiko Olivas has a minor ankle injury for the hosts. After four consecutive wins, Sergio isn’t expected to tinker with his side at all. Antonito should hold his place out wide on the right after scoring against Real Betis.

For Espanyol, Sergi Darder should be fit to start in central midfield after illness. Hernan Perez is expected to retain his place on the right wing ahead of Leo Baptistao. Borja Iglesias will lead the line once more after two goals last time out.

Alex Granell is still an injury doubt for the hosts, but should win the race to be fit for the weekend for Girona. Pere Pons is likely to partner Douglas Luiz in central midfield if that isn’t the case. Cristhian Stuani will start up top once again after Eusebio’s decision to rotate slightly last weekend.

On Rayo’s side, Oscar Trejo is back from suspension for the away side and should slot straight back into midfield. Alex Galvez is expected to partner Jordi Amat at centre-back for Rayo once more. Adri Embarba and Gael Kakuta are expected to get the nod either side of Raul De Tomas.

Rayo Vallecano have won their last 4 matches against Girona in all competitions.

Bilbao have won only one game so far this season and pressure has started mounting on manager Eduardo Berrizo. They had a mid-week game as well as Valencia who had to contend in the Champions League. Mercelino’s men are struggling in front of goal, managing only 8 in their first nine La Liga games.

Athletic will likely name their strongest side this weekend after failing to pick up a midweek win against Rayo. Yeray should return to the heart of the defence at the expense of Peru Nolaskoain. Aritz Aduriz is expected to lead the line, with Inaki Williams deployed out on the left wing.

Goncalo Guedes is expected to be back fit to start after missing out for several weeks. Rodrigo Moreno and Kevin Gameiro should lead the line for Marcelino, but Michy Batshuayi is also in contention. Daniel Wass is expected to get the nod ahead of Carlos Soler on the right wing again.

Valencia have drawn 6 of their last 7 matches (La Liga).  Athletic Bilbao are undefeated in their last 7 home matches against Valencia in all competitions.

Celta go into Saturday’s game winless in their last five La Liga games. Pressure is also building on their manager to grind out some good results as soon as possible. Eiber on the other hand have taken an impressive four from their last available six points.

Celta have Maxi Gomez out until the start of November with a sprained ankle, so Dennis Eckert should continue up top. Antonio Mohamed is expected to switch to a back three once more, with Nestor Araujo back from suspension. Sofiane Boufal should retain his place in the front three ahead of Pione Sisto.

Marko Dmitrovic is still an injury doubt, but should replace Asier Riesgo in goal for the visitors. Jose Mendilibar is otherwise expected to go with the same side that drew with Athletic last weekend. Pablo De Blasis and Fabian Orellana should provide the main threat from wide areas.

Celta Vigo have won their last 4 matches against Eibar in all competitions.

Levante are in brilliant form going into the home games with Leganes. They have won their last three games which has seen them match up the table. For Leganes, have been impressive on the road but terrible on the road, picking only a single point from their first four games.

Borja Mayoral is available for Levante once more after sitting out against his parent club, but isn’t expected to start. Paco Lopez should maintain the same style, system and personnel that have taken his side to three consecutive wins. Roger and Morales should lead the line on the counter attack once again.

Unai Bustinza is back fully fit and should be preferred at centre-back to Kenneth Omeruo. Gerard Gumbau and Mikel Vesga should give Ruben Perez support in midfield once more. Oscar Rodriguez should be deployed on the left wing, with Guido Carrillo leading the line.

Levante are undefeated in their last 6 matches against Leganes in all competitions.

Atletico will be looking for a quick reaction after their shock 4-0 loss at Dortmond in the Champions League mid-week. However, their confidence must be low after keeping only a single clean sheet in their last four games. They come up against a Sociedad side that has won all of their last two games away from home.

Juanfran is suspended for the hosts after picking up his fifth yellow card of the season against Villarreal. Santiago Arias will be handed the chance to impress at right-back for Atleti. Jose Gimenez is still struggling with a minor hamstring problem, so Lucas Hernandez should continue at centre-back.

For Sociedad, Theo Hernandez is back from a ban and should return at left-back for the away side. Sandro is expected to get another chance out wide, with Willian Jose returning to the starting lineup up top. Ruben Pardo should play a creative midfield role in the continued absence of Mikel Merino.

Atletico are undefeated in 24 of their last 25 home matches (La Liga).

Getafe have lost just once in their last four league fixtures but have won only a single game at home all season. Betis have suffered back to back 1-0 defeats going into Sunday’s game and will be looking to make the turn as soon as possible.

Francisco Portillo is serving his second game of suspension for the home side, after seeing a straight red card against Levante recently. Dimitri Foulquier should start on the right-hand side of midfield once again, after finding the back of the net in a good performance against Rayo Vallecano. Djene and Leandro Cabrera are both expected to get the nod at centre-back, after the former managed to get a booking rescinded after of his side’s win last weekend.

Andres Guardado is back in training after a recent hamstring injury, but is unlikely to be rushed back into action this weekend for the visitors. Giovani Lo Celso is expected to retain his place in the middle of the park after a brilliant midweek performance in the Europa League against AC Milan. Tony Sanabria and Sergio Leon started in Italy on Thursday night, so Loren is expected to lead the line for the away side due to rotation.

Real Betis have failed to score in 5 of their last 7 away matches (La Liga).

Barca are unbeaten in their last five games heading into the much anticipated Classico. Despite winning 2-0 in mid-week against Inter Milan without Lionel Messi, they are expected to operate below 100% at home to their perennial enemy on Sunday. For Real, they got back to winning ways with a 2-1 win over CSKA Months following close to a month without any sort of victory.

Lionel Messi is out for the next five games for Barcelona after fracturing his arm against Sevilla in recent LaLiga action. Rafinha was surprisingly selected to start ahead of Ousmane Dembele and Malcom in Barcelona’s midweek win over Inter and vindicated his selection by scoring. He could retain his place in attack here. Gerard Pique and Clement Lenglet are the only available senior centre-backs at Barcelona’s disposal and will continue, while Arthur is over a minor calf complaint.

Marcelo should be fit to start at left-back after suffering an injury scare against Viktoria Plzen in the Champions League in midweek. Nacho is expected to feature at right-back in the absence of Dani Carvajal, as the former provides a more solid defensive skill set than Alvaro Odrizola. Marco Asensio is expected to be named on the bench, as Isco gets the chance to threaten from the left-hand side of the attack. Vinícius Júnior is suspended for the away side after getting sent off in a recent Real Madrid Castilla match.

Barcelona have lost only one league game at home to Real Madrid since 2012.

Alaves go into the game in good form having lost only one of their last five outings. Recent victories over Celta and Real shoul spur them on against a Villareal side that has won only one of its last five league games.

Guillermo Maripan is expected to feature at centre-back for the home side, with Ximo Navarro instead preferred to Martin at right-back. Abelardo is expected to go with a three-man midfield of Mubarak Wakaso, Tomas Pina and Darko Brasanac, in an attempt to stifle Villarreal’s most dangerous area of the field. Jony and Ibai Gomez will look to continue their excellent form from out in the wide areas in support of Jonathan Calleri.

For the visitors, Victor Ruiz is still sidelined for the away side due to an injury problem, which should see Ramiro Funes Mori continue at centre-back. Santi Caseres could start at the base of midfield alongside Manu Trigueros after making his injury comeback in LaLiga against Atletico Madrid. Javi Calleja’s side managing to beat Rapid Vienna by a 5-0 scoreline in the Europa League on Thursday, which should give his players a much-needed boost.

Deportivo Alaves are undefeated in their last 5 home matches

Sevilla go into the game having won all of their last four home games in all competitions. However, they lost 4-2 at the Camp Nou last weekend and will be hoping they can bounce back immediately. For Husca, they should be worried going up against Sevilla as they are winless in their last eight league games.

Pablo Machin has no fresh injury concerns to worry ahead of Sevilla’s encounter with SD Huesca. No changes are expected from the side that lost to Barcelona last weekend, despite defeat. Gabriel Mercado made the matchday squad in Sevilla’s midweek Europa League action and will be integrated back into the first-team gradually. Sergio Escudero will also return over the coming weeks.

Damian Musto misses out for the away side due to suspension after picking up his fifth booking of the season last time out. Juan Aguilera is expected to come in at the base of midfield, as Gonzalo Melero is still struggling with a minor injury problem. Samuele Longo is expected to lead the line despite his goalscoring drought, while Alex Gallar, Chimy Avila and Cucho Hernandez try and offer some dynamism in and around the Italian forward.