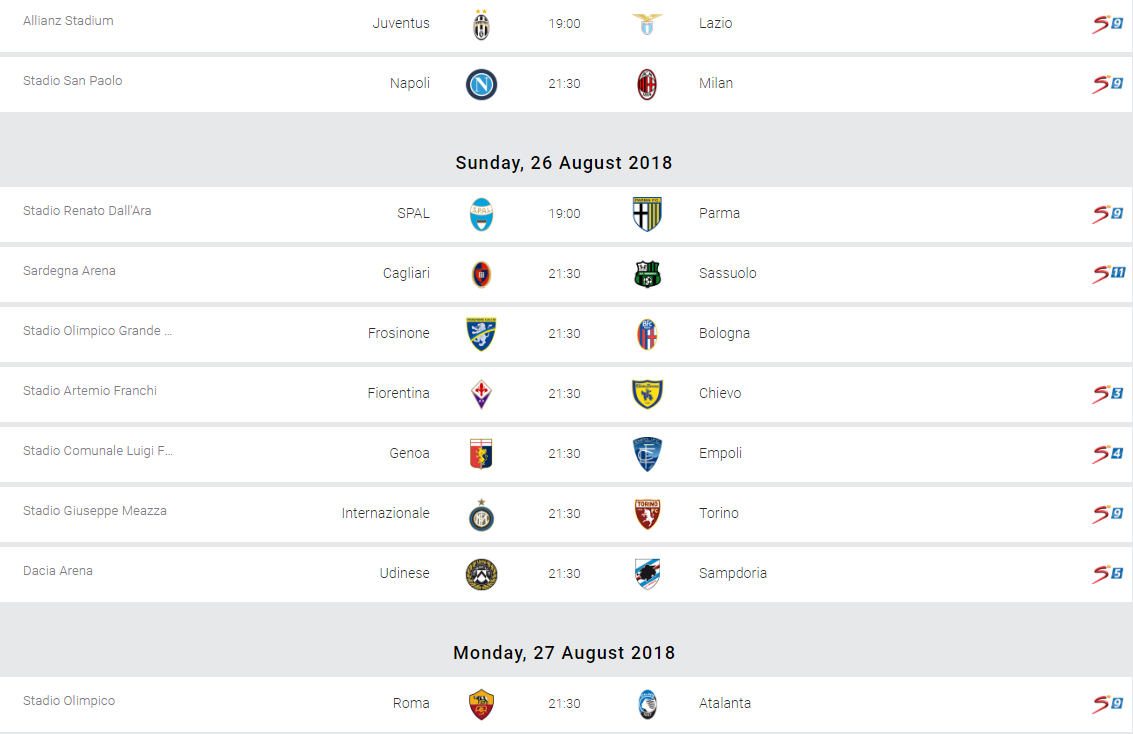 Cristaino Ronaldo will have a chance to mark his Serie A home debut with a goal after having a frustrating outing in his first game with the “Old Lady” last week.

Ronaldo’s Juventus who won 3-2 at Cheivo Verona last time out will take on a Lazio side that lost a thriller 2-1 at home to Lazio on opening day and will indeed pose a tough test to the seven time defending champions.

Simone Inzaghi’s men will be looking to repeat their victory here last season and a good result can direct their campaign in the right direction. The Aquile have become something of a nightmare opponent for Juve recently, winning the Italian Super Cup in August 2017 and conquering Turin 2-1 a couple of months later in Serie A.

The good news for Inzaghi is that Lucas Leiva and Senad Lulic are back after missing the Napoli defeat due to suspension. Patric is still out of action along with Valon Berisha and Jordan Lukaku, while Luiz Felipe is pushing to recover from a muscular problem.

While the attention will be on Cristiano Ronaldo once again – and for good reason – Juventus will be looking to get the most out of the supporting cast around him, in particular Paulo Dybala who scored a last-minute winner in Rome when these two sides last faced off. If they can get their front line playing with pace and fluidity, Lazio will be in for a world of trouble.

Gonzalo Higuain will make his competitive Milan debut in the home of former club Napoli, but without Hakan Calhanoglu. The Rossoneri saw their opening fixture against Genoa postponed after the tragic collapse of the Ponte Morandi bridge in the port city, killing 43 people. As a result of the change of schedule, Calhanoglu will have to sit out his one-match ban at the Stadio San Paolo and is a big loss for Gennaro Gattuso. He is already without Andrea Conti, Cristian Zapata and Ivan Strinic, the former Napoli full-back diagnosed with a heart problem and forced to take a break from competitive football.

Carlo Ancelotti comes up against his beloved Milan and Gattuso, a player who shared much of his successes at San Siro. Ancelotti had a rough pre-season, including a 5-0 defeat to Liverpool, but saw Napoli recover from an early Ciro Immobile scorcher to beat Lazio 2-1.

Milan haven’t beaten Napoli since a 2-0 home result in 2014, managing only two draws from seven meetings. Their last success at the Stadio San Paolo was 2-1 in October 2010, followed by two stalemates and five defeats.

SPAL made a fantastic start to the Serie A season, but Parma have regrets after throwing away a 2-0 lead. Parma’s first game back in Serie A after their demotion to Serie D four years ago was a 2-2 home draw with Udinese.

Sassuolo got off to the ideal start by beating Inter, but Cagliari were humiliated by new boys Empoli and are in dire need of a good result.

Sassuolo, couldn’t have gotten off to a better start under Roberto De Zerbi with a 1-0 over a much hyped Inter side. There were question marks over just how good De Zerbi was after his months with Benevento, but Sassuolo fans will be dreaming of all possibilities after last weekend.

Sassuolo won two of their last three meetings with Cagliari, drawing the other, since a 4-3 thriller in Sardinia in December 2016. That run included a 6-2 thrashing at the Mapei Stadium in May 2017.

Chievo came so close to a huge upset against Juventus and now try again with late starters Fiorentina. La Viola had their Week 1 match with Sampdoria postponed after last week’s tragedy in Genoa.  Fiorentina fans are targeting a direct route to Europe this season, with Stefano Pioli building a revamped outfit with a few key signings.

The Gigliati will be without the injured Cyril Thereau and suspended Jordan Veretout. This means that they will go into the match with a near full-strength squad, as they look to get off to the perfect start. Chievo goalkeeper Stefano Sorrentino is unavailable for Chievo after last week’s horror collision with Cristiano Ronaldo left him with a fractured nose and whiplash. Therefore, Andrea Seculin is expected to go in goal for the team in an otherwise unchanged line-up from last weekend.

Fiorentina have not conceded a goal at the Stadio Artemio Franchi to Chievo since 2014, and are unbeaten at the venue against their opponents since 2012 – a 2-1 win for the Gialloblu.

No side has won this fixture away from home in normal time. The only exception when an away side triumphed was the penalty shoot-out victory for Frosinone in the Copa Italia nine years ago.

Both sides will be on the hunt for maiden points this campaign after losses in their respective opening day fixtures. The hosts lost 4-0 away to a rampant Atlanta side last Monday while Bologna went down 1-0 at home to SPAL.

Bologna will be without Hungarian midfielder Adam Nagy who was sent off in last week’s defeat and will be hoping for better fortune this time round against a side they lost 1-0 to the last time they met in the Serie A.

Genoa face Empoli in the home side’s first Serie A match of the season. The Grifone begin their campaign a week late after last weekend’s scheduled match at Milan was postponed in the wake of the Morandi bridge tragedy. They will have to do so without three of their key performers of 2017-18, with Mattia Perin, Diego Laxalt and Armando Izzo all having left the Stadio Luigi Ferraris over the summer.

Newly-promoted Empoli head to Liguria on the back of an impressive 2-0 opening victory over Cagliari. Despite having less possession and fewer shots than their opponents, goals by Rade Krunic and Francesco Caputo handed the Azzurri the perfect start to life back in the top tier of Italian football. And with no new suspension or injury worries, boss Aurelio Andreazzoli is likely to field the same starting XI that served him so well in last weekend’s first round of fixtures.

Last season’s Serie B title triumph was the first time Empoli have won either of Italian football’s top two tiers. Genoa, meanwhile, have picked up a combined 16 Serie A and Serie B crowns.

Luciano Spalleti’s Inter will have a chance to do wright all that went wrong in their opening day defeat away to Sassuolo when they host Walter Mazzari’s Torino at the Satdio Guiseppe Meaza on Sunday evening. Like Inter, Torino lost their first game to Roma whilst conceding an 87th minute goal, something that surely didn’t go down well with Mazzari.

With no major injuries or suspensions for either side, the neutrals will be hoping for more of the cracker that saw these sides draw 1-1 at the same venue last season.

Torino have won only two of their games away to Inter in the last 15 years. Both victories have come in their last four visits to Milan including a 2-1 victory in the ill-tempered game that saw both sides have a man sent off back in April 2016.

Sampdoria get their season started with a trip to Udine, after the Friulani recovered from a 2-0 deficit to draw at Parma. The Blucerchiati were meant to kick off against Fiorentina last Sunday, but that game and Milan-Genoa were postponed due to the tragic collapse of the Ponte Morandi.

Udinese got off to a mixed start this season under Spanish tactician Julio Velazquez. They crashed out of the Coppa Italia in a 2-1 home defeat to Benevento, then were trailing 2-0 at the Stadio Tardini before a late comeback.

Samp lost two of their last three trips to Udine, conceding six goals and scoring one, since the 4-1 triumph here in May 2015. Last term’s 4-0 thrashing was largely dictated by an early Edgar Barreto red card.

The last game of game week two will feature table leaders Atlanta away to title hopefuls Roma. Atlanta won 4-0 on opening day while Roma required a late Edin Dzeko strike to take care of Torino on the same day.

Atlanta raced into a 2-0 lead en route to a 2-1 victory here last seaon and will be hoping they can get better of Eusebio di Francesco’s men for the third time in their last four attempts at the Stadio Olympico.