Cranes a leg into CHAN finals after commanding victory over Rwanda 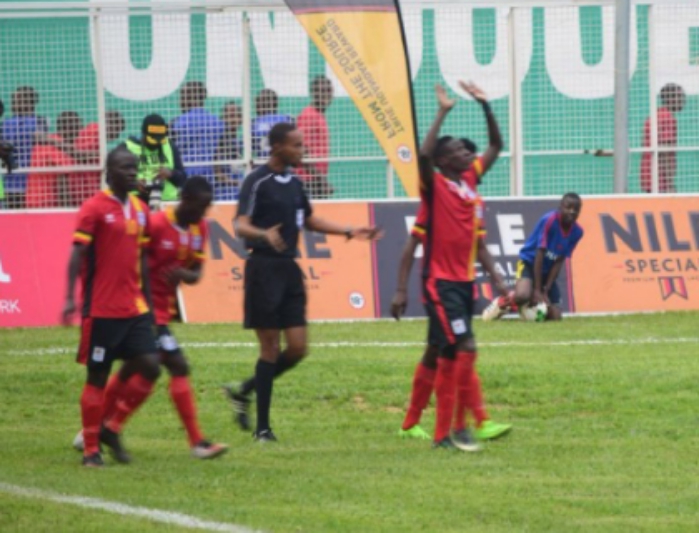 FOOTBALL–Moses Basena and Fred Kajoba made sure that a fourth consecutive CHAN tournament appearance is very much on the cards as they guided Cranes to their first competitive match victory.

Uganda Cranes thrashed Amavubi Stars of Rwanda 3-0 in the first leg of the CHAN 2018 round two qualifiers at the St Mary’s Stadium in Kitende courtesy of a brace from Muzamir Mutyaba.

Rwanda had approached the game with confidence after ejecting Tanzania and doing well in their build up matches and arrived in Entebbe hoping to upset the odds in the derby.

But if Antoine Hey thought Uganda Cranes would be a limping duck in their first game since Milutin Micho Sredojevic abandoned the steady sail of the ship for a luxury cruiser the Rwandan tactician was in for a rude wake reminder of what the Cranes team currently is made of.

That Hey had to get the wake up more just inside 15 minutes was enough evidence of what the confident Cranes can do on their day.

Derrick Nsibambi was already proving more of headache than a migraine to the Amavubi rearguard so when he made another darting run into the area, a foul was only begging the referee didn’t hesitate to point to the spot.

Muzamir, who was having a joy game, made sure of his mark with a perfectly executed shot from the spot.

Hey’s plans appear to have been rendered useless from then on as the Amavubi struggled to cope with the Cranes.

The visitors’ task was made harder when Mutyaba made it 2-0 eleven minutes later finishing off superbly after a brilliant move involving several passes by his team mates, including Milton Kalisa and Nicholas Wadada.

Dispite Uganda dominating in the first half, they were instead in the wrong side of the laws of the game with the trio of Savio Kabugo, captain Bernard Muwanga and goalkeeper Ismail Watenga all going into referee Pacifique Ndabihawenimana’s book.

However, the bookings couldn’t dampen the desire as Nsibambi made sure of the win and points with a superb curling shot to make it 3-0 after a mazy interplay in the midfield six minutes into the second half.

Uganda made three substitutes in the second half with Tom Matsiko, Muhammad Shaban and four goal hero (vs South Sudan) Paul Mucureezi all getting playing time.

Rwanda will have to go all-out and attack in the second leg and hope they can score as many as they conceded at St Mary’s if they are to stand a chance of making it to the tournament proper in Kenya early next year.

The second leg will be played in Kigali next Saturday 19. But chances of a comeback in Kigali are as their president Kagame losing to his political opponents in elections. The return leg could as well be a ceremonial affair, barring complacency.