Not Eddie Mutwe, Nubian Li is not listed as army court releases people power fans – who were arrested in Kalangala – last year 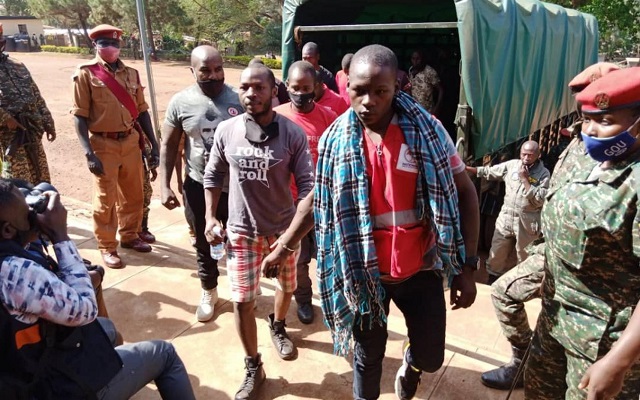 KAMPALA – Seventeen of the 35 National Unity Platform -NUP party supporters – who were arrested in Kalangala last year and remanded by the Uganda People’s Defense Forces – Court Martial were released on bail on Tuesday.

The General Court Martial Chairperson Lt. General Andrew Gutti released the suspects on Tuesday, confirming that some of suspects he was releasing were sickly; and that the state didn’t raise any objection to their bail application presented last week.

While releasing the 17 suspects, Lt. Gen. Gutti ordered them not to go beyond Kampala and Wakiso districts without permission from court.

Gen. Gutti also directed the NUP released suspects to report to court twice a month every after fortnight; executed a non cash bond of Ugx20 million while each of their sureties executed non cash bond of Ugx 50 million.
Lt. General Gutti warmed that the breach of any of the bail terms will lead to the automatic cancellation of bail.

The sureties for the accused included top NUP party leaders – Aisha Kabanda, the Deputy Secretary General Flavia – Kalule Nabagabe, the head of the Women League, Mathias Mpuuga, the NUP Vice President in Charge of Buganda region, David Lewis Rubongoya, the Secretary General, Fred Nyanzi Ssentamu, the head of Mobilization and Alex Waiswa Mufumbiro, the head of Training and Patriotism. The suspects are part of the 49 NUP supporters arrested upon arrival in Kalangala district on December 30th 2021 during the campaign trail of former NUP presidential candidate Robert Kyagulanyi Ssentamu. They were first arraigned before Masaka Magistrates Court on January 4th, 2021 where they were charged with inciting violence and granted bail.

However, the accused didn’t leave prisons after the Uganda Prison Services – UPS indicated that they had received a production warrant to present them before the Makindye based General Court Martial. On January 8th, 2021, the group comprising of men and women were charged with illegal possession of ammunition i.e. four bullets before being remanded to Kitalya and Kigo government prisons. Days later, they applied for bail which was rejected by the court martial chairperson on February 15th, 2021. He later released 13 of the suspects, arguing that the rest have the potential of fueling acts of violence once released.