KAMPALA – Uganda has minimal chances of hosting any fixtures of the upcoming World Cup 2022 qualifiers within the country, after the world soccer governing body – Fifa as well as continental partners – Caf slapped a ban on Mandela National Stadium – Namboole.

A team of Fifa and Caf inspectors recommended last May that unless authorities upgraded Namboole to fit the ‘minimal required standards,’ it was unlikely to host any matches under the world cup arrangement. The team discovered that the facility’s pitch, toilets, seats, pavilion press box, changing rooms as well as escapes routes were all substandard as per Fifa requirements.

Another team of inspectors, visited the country last month, particularly to examine St. Mary’s Stadium – Kitende – the only privately owned facility, which could offer a relief in hosting highly profiled fixtures in a country where stadia and playground have become a target for land-grabbers.

Minister in charge of Sports, Hamson Denis Obua confirmed last week that The Cranes’ 2022 world cup qualifying home games would be switched to a neighbouring country as the only available option due to challenges related to funds as well as time in renovating Namboole.

Government through various arms – including the works ministry, educations and sports as well as finance estimated, after a needs assessment, that it would cost Ugx96 billion to upgrade the 45,000 capacity seater, constructed about two decades ago.

“In the current circumstances, Uganda only has St. Mary’s Kitende,” confirmed Obua.

“I want to put the country on notice that The Cranes will have no choice but to host all the world cup qualifiers in one of the countries outside Uganda, if Fifa doesn’t approve Kitende,” Obua assured the country as he responded to MP’s queries over the issue during a parliamentary session last week.

Uganda, who failed to qualify for a third consecutive Afcon finals, scheduled for Cameroon next year, turned their focus onto the African qualifiers for the Fifa 2022 World Cup, scheduled for November 21 – December 18 in Qatar.

The Cranes are pooled in Group E alongside Mali and neighbours Kenya and Rwanda. 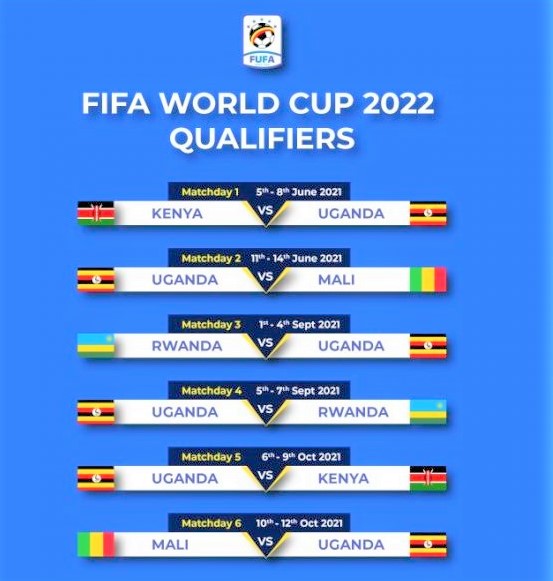 Uganda’s desire to appear at the global showpiece will begin with a trip to Nairobi to face Harambe Stars between June 5-8, 2021; before hosting Mali between June 11-14, in a fixture mostly to be played in Dar es Salaam – the best alternative venue, according to Fufa sources.

A double header against Rwanda will follow when The Cranes travel to Kigali between between September 1-4 for the first leg before facing-off in the reverse fixture with two days.

Uganda will play its last group matches in October, hosting Kenya in the first week later conclude with a trip to Bamako between 10 -12.

The winner of group E after six games, will join the final qualifying phase of nine other pool leaders to fight for the available five for Africa.

Our sources at Fufa revealed that Fifa was yet to communicate its position on St. Mary’s Stadium – Kitende but was quick to add: “Wherever government will decide to be our home ground – we are sure will work for us. But as our now, we are certain Namboole is out.”