dfcu Bank in fresh storm over transfer of Meera properties

KAMPALA – A fresh storm is looming for dfcu Bank after it emerged that the bank was misled by city Law firm Sebalu & Lule Advocates to illegally transfer title properties that belong to former Crane Bank Ltd landlord Meera Investment Ltd.

According to a leaked dossier, the Sebalu & Lule Advocates who were recently barred by the High Court from representing the same bank against city tycoon Sudhir Ruparelia for being conflicted misled the dfcu Bank to transfer leasehold titles from Crane Bank Ltd during the controversial takeover two years ago.

In a leaked document titled Transfer of former Crane Bank household properties, dated May 8, 2017, “the law firm skipped important aspects of the law including the fact that banks are not allowed to invest in business for fear of conflict of interest with their clients, apart from their main premises” banking analysts say.

“In light of the lengthy of time between the completion of date and when dfcu can vividly exercise the option to rescind the purchase of household properties, our recommendations is that the transfer be registered immediately,” reads an excerpt from the leaked document.

According to industry experts, the whole procedure was entangled with fraud as there was no consent from the Landlord (Meera Investment Ltd) before transferring the lease to another party.

Experts says this, “nullifies the transfer because lack of consent alone nullifies the whole procedure” as ownership belonged to Meera Investment Ltd, an independent body from the defunct Crane Bank Ltd.

Experts also wondered how ‘senior’ lawyers like Sebalu & Lule Advocates could have ignored such a very important aspects of law, causing dfcu massive losses in billions of shillings. 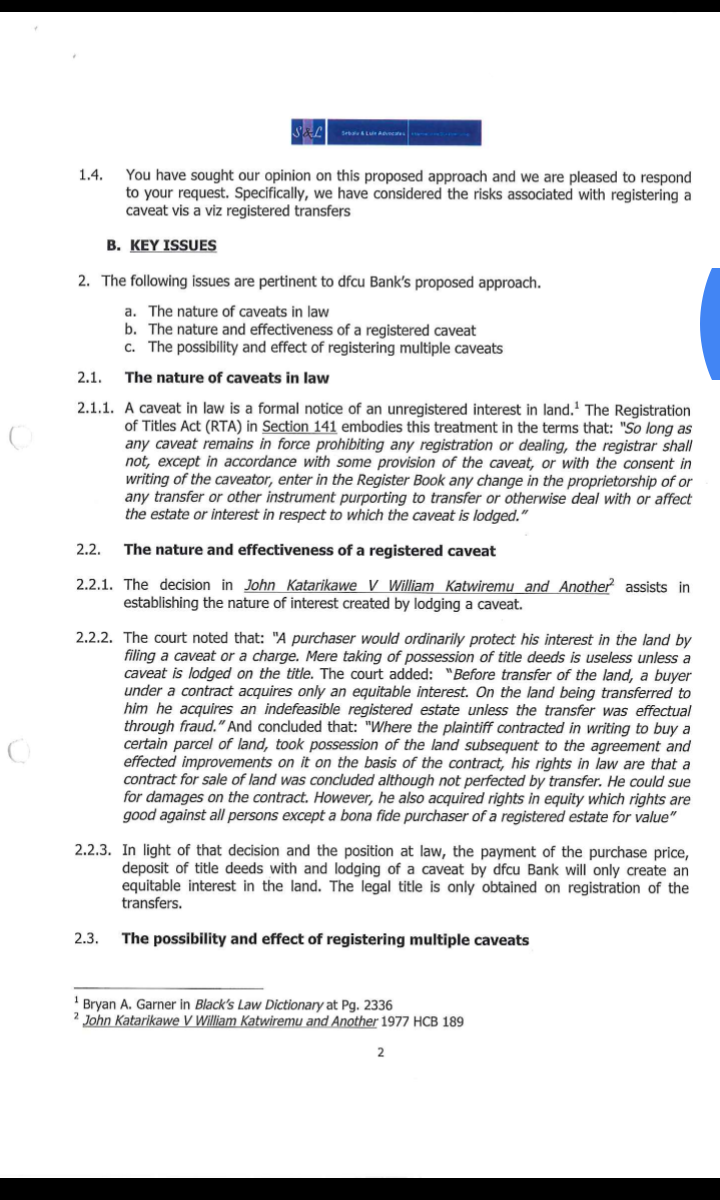 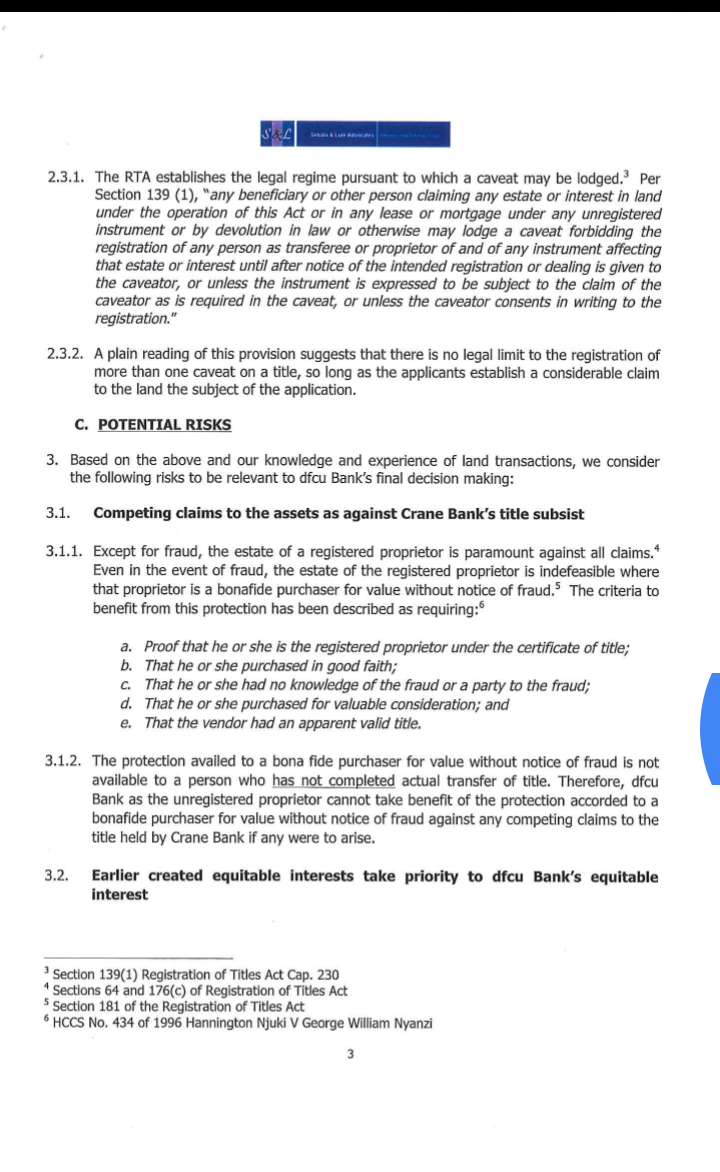 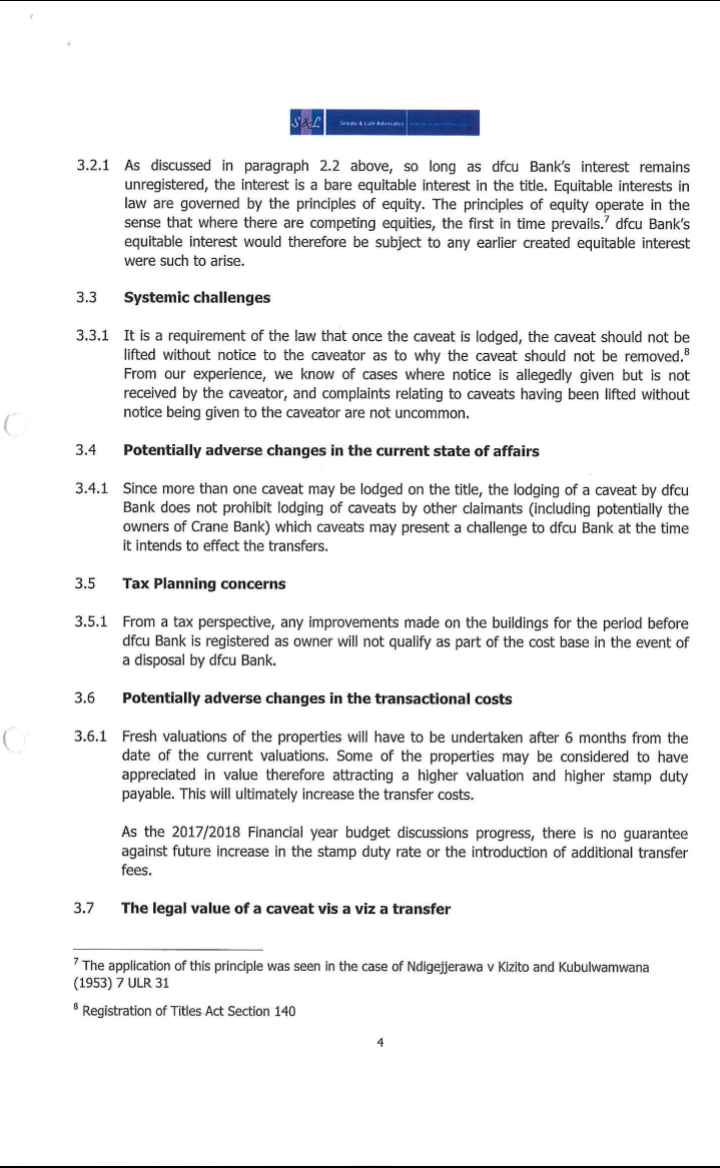 The central bank in October 2016 closed Crane Bank Ltd, previously one of the best performing banks before controversially selling it to dfcu Bank in January 2017 for a paltry UGX 200 billion.

The central bank has since come under the spotlight after the closure of Crane Bank Ltd backfired with both Parliament and the Auditor General faulting the BoU officials in the middle of the transaction.

The dfcu Bank which received some of the assets and liabilities of Crane Bank would be allowed to operate in different branches whose ownership belonged to Meera Investments Ltd, one of the companies owned by city tycoon Sudhir Rupaleria.

Between 2012 and 2016, Meera leased the 46 properties to Crane Bank on different terms with the leases being duly registered as encumbrances on Meera’s freehold and mailo interest.
The lease titles were subsequently processed and issued to Crane Bank.
Crane Bank agreed to pay $6,000 as ground rent for each of the properties effective on or before the January 1, of every year to the property owners (Meera Investments).

The lease agreements, court documents show, provided that Meera had the option to review the ground rent after the expiry of three years.

Meera had also agreed with Crane Bank under various lease agreements that in case of any breach, non-performance, or non-observance of what they had agreed on in the lease agreements, it will be lawful for Meera to seek legal redress from court.

“It was further agreed between the plaintiff [Lessor] and Crane Bank [Lessee] that anything done contrary to the terms of the lease agreements would forthwith cease the lessee’s rights or interest in the suit properties without prejudice to the lessor’s entitlement to rent unpaid and due,” Meera claims.
With the agreements in place, on October 20, 2016, BoU took over Crane Bank under statutory management.

On January 24, 2017 Bank of Uganda announced that it had transferred all the assets and liabilities of the bank to dfcu Bank.

dfcu Bank, which was the new tenant then moved to take over the 46 properties, without the consent of the owners Meera Investments.

“Through a subsequent search at the relevant land registries, the plaintiff (Meera Investments) discovered that; without it’s prior written consent, the first defendant (dfcu), in addition to taking possession of the suit properties, caused the leasehold interest to be transferred into its names and had been registered thereon as the proprietor of the leasehold interest,” Meera Investments says in their plaint.

They add that at the execution of the transfers in favour of dfcu and at the time of causing the transfer of the leasehold interest into the names of dfcu, the registration of Meera as the proprietor of the freehold and mailo was and is still intact.

Meera says dfcu Bank was aware of this fact or could have ascertained by way of a simple search.

They also fault the commissioner land registration for fraudulently going ahead to transfer the leases of the properties to Dfcu without the prior consent of the owners.

“The plaintiff avers that the second defendant (commissioner land registration), [was] well aware of the existing lease agreements and the conditions therein including the requirements for obtaining prior written consent from the plaintiff as the lessor, before any transfer of the leases and parting with possession thereof, nonetheless proceeded to illegally transfer and register the first defendant as lessee of the suit properties, without any consent or authorisation from the plaintiff as required under the various lease agreements,” Meera argues.

Sebalu & Lule Advocates, claimed Sudhir fraudulently transferred freehold titles of 48 plots of land (where the bank has its branches), purchased and developed using the bank’s finances into the names of Meera Investments from Crane bank.

The plots, according to the court documents, were then reportedly leased to the owner (Crane bank) at UGX100m premium for 49 years and $6,000 in ground rent per year payable to Meera Investments.

Mr. Sudhir has since dismissed the allegations as “presumptuous, speculative and founded on fanciful reasoning.”

He said they do not reflect the market realities of obtaining leasehold titles in Uganda.

According to Sudhir, BOU’s allegation that Crane Bank obtained over 14 freehold titles is false since the bank is a “non- citizen,” thus couldn’t hold the land as a freehold owner as stipulated by the Land Act.

As part of Crane Bank’s expansion plan, Sudhir argued, the bank acquired a number of leases with different tenure, some of which were to last just seven years with a commercial view that it was better in the long run to obtain freehold titles in lieu of the said leases.

He added that after Crane bank obtained over 14 freehold titles, it was considered that pursuant to the Land Act, the bank could not hold the land as a freehold owner since it was a non-citizen within the meaning of the Land Act.

Meera has previously asked court to declare that the continued presence of dfcu Bank on its properties amounts to trespass and that they should be ordered to vacate with immediate effect.