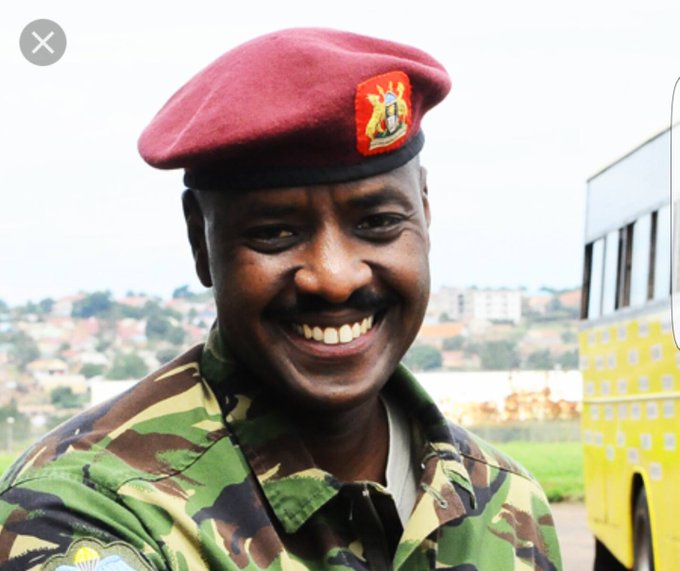 Gen. Muhoozi, who has been Commander of Land Forces continues with duties as Senior Presidential Advisor for Special.

In 2017 Gen Kainerugaba, the son of president Yoweri Museveni, was appointed Presidential Adviser, the position he still holds.

As a child, Gen Kainerugaba attended schools in Tanzania, Mount Kenya Academy in Nyeri Kenya and Sweden. After his father became President of Uganda, he attended Kampala Parents School, King’s College Budo and St. Mary’s College Kisubi. He graduated in 1994.

He was admitted to Egyptian Military Academy where he took both the company and battalion commanders courses. He also has attended the Kalama Armoured Warfare Training School. In 2007 he was admitted to a one-year course at the United States Army Command and General Staff College at Fort Leavenworth, Kansas, graduating in June 2008. Following that, he successfully completed the Executive National Security Programme at the South African National Defence College.

In 1999, Gen Kainerugaba joined the UPDF at the rank of officer cadet and graduated in 2000 from the Royal Military Academy Sandhurst, the British Army’s officer training school.

In September 2011, he was promoted to Colonel. In early 2012, he enrolled at the South African National Defence College for the Executive National Security Program. In August 2012, he was promoted to Brigadier General and appointed Commander Special Forces Command. In 2013 and 2014, Gen Kainerugaba was one of the senior UPDF commanders who deployed to South Sudan to support the Government of South Sudan after fighting broke out in Juba between rival factions of the SPLA. In 2017, he was appointed Senior Presidential Advisor on Special Duties, a position he held until December 2020.

In June 2021, he was appointed Commander of UPDF Land forces taking over from Lt. Gen. Peter Elwelu who is now his Deputy CDF.

Gen. Kainerugaba took up a daring task that Angola’s President João Manuel Lourenço and Democratic Republic of Congo’s Félix Tshisekedi failed to accomplish in 2019 when they facilitated four meetings between President Paul Kagame and President Museveni.

During his last visit on January 22, Gen. Kaninerugaba discussed with President Kagame a wide range of issues regarding the relations between the two countries.

In 2008, he was deployed as Second-In-Command of “Operation Lightening Thunder” in the Democratic Republic of the Congo. This successful operation was organized to degrade the combat capacities of the rebel Lord’s Resistance Army in Garamba, deep in the jungles of the DR Congo.

At some point, President Museveni in a 2013 speech to the UPDF High Command, said this of the then Brig. Muhoozi, “I am most pleased that Muhoozi has turned out to be a very serious officer, quiet and devoted to the building of the army” in reference to Muhoozi’s work in building the Special Forces Command. Muhoozi has been dubbed by some in the media as the ‘tweeting General’ in reference to his sudden prolific use of Twitter, frequently posting content that some do not view as befitting of someone of his rank and position in the Army and in Uganda’s social sphere.”

Gen Kainerugaba is much-anticipated next president of the Republic of Uganda.

In 1999, he married Charlotte Nankunda Kutesa, who he refers to as “the most beautiful woman”.