KAMPALA – The Archbishop of Kampala, Cyprian Kizito Lwanga has died on Saturday April 3, 2021.

The Most Rev. Lwanga was found dead in his house at Lubaga on the eve of Easter Sunday, sources in Kampala Archdiocese told PML Daily.

Dr. Lwanga presided over the Chrism Mass at Lubaga on Thursday and was last seen participating in the way of the Cross on Friday afternoon ahead of Easter celebrations.

Who was His Grace Dr. Cyprian Kizito Lwanga

He was ordained a priest on 8th April 1978 at Lubaga Cathedral by His Eminence Emmanuel Cardinal Nsubuga. 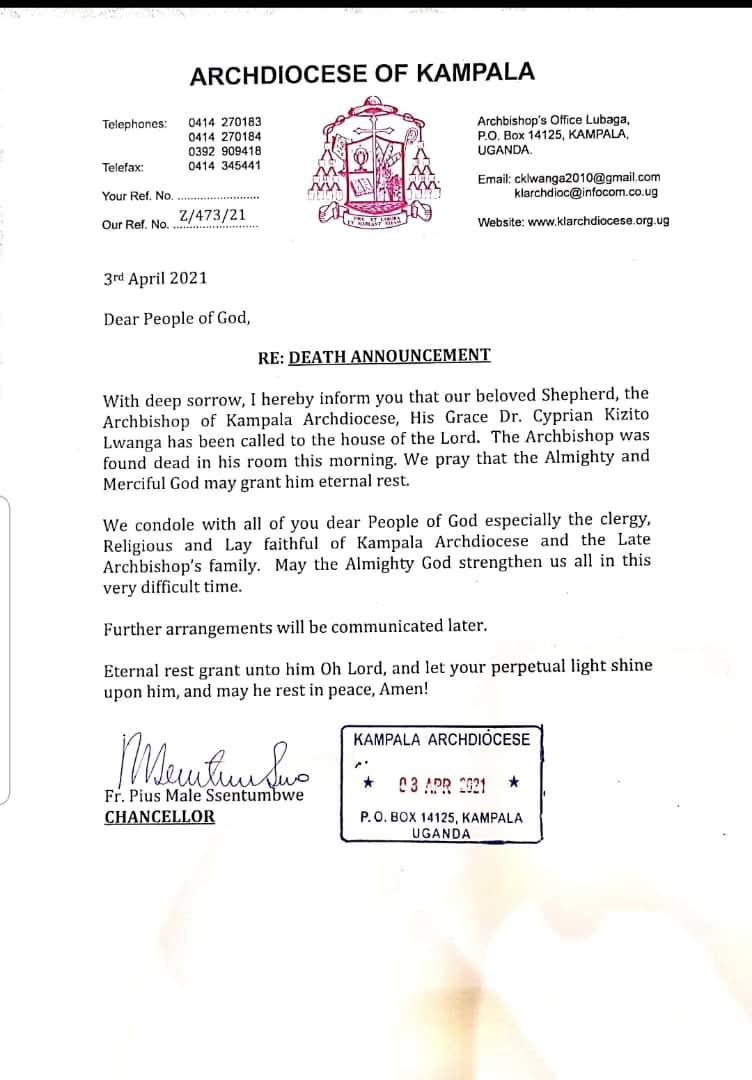 Archbishop Cyprian Kizito Lwanga was born at Naggalama in Mukono district formerly the Archdiocese of Kampala (but now the Diocese of Lugazi) on January 19th 1953.

His Late Father Joseph Nsubuga Wamala was a catechist and he died in 1983. He attended Kyabakadde Primary School and in 1964, he joined Nyenga Seminary. He thereafter entered the National Major Seminary of Philosophy of Katigondo (1972-1974) and in 1974-1978, he studied Theology at the National Seminary of Ggaba. He was ordained a priest on April 9th 1978 by the Late Cardinal Emmanuel Nsubuga of the Archdiocese of Kampala.

In 1979, he joined the University of Clermont-Ferrand (France) to study a course in administration and languages, with particular focus on administration.

He was appointed Chaplain of His Holiness in 1986. In 1994, he was awarded a Doctorate in Canon Law of the Pontifical Urban University in Rome.