JUST IN: Rwanda beats Uganda in the race for Deputy Chairperson of African Union Commission

Nsanzabaganwa won with 42 votes, beating Uganda’s Pamela Kasabiiti Mbabazi who got 10 votes and Djibouti’s Hasna Barkat Daoud who only got two.

Nsanzabganwa, current Vice Governor of Rwanda’s Central Bank was introduced to diplomats during a dinner of members of African Diplomatic Corps that was hosted by Minister Vincent Biruta in Kigali, December 3.

The 49-year-old mother of three, Nsanzabaganwa holds a Honorary Doctorate from Stellenbosch University- South Africa which she was awarded for greatly contributing to country development.

She has been deputy governor of Central Bank since 2011 and prior to this, she served as Minister of Trade and Industry between 2008 and 2011.

Prior to this, she was Minister of State at the Ministry of Finance and Economic Planning between 2003 and 2008. 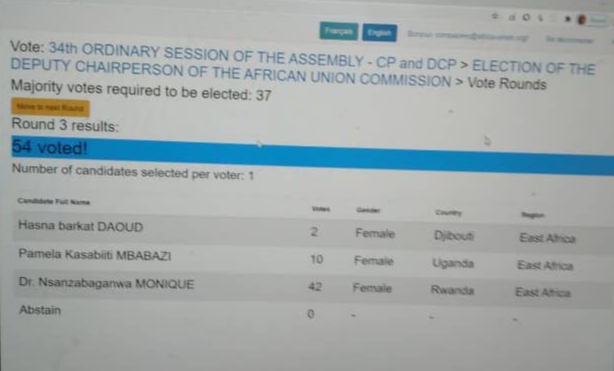 Dr. Nsanzabaganwa is chairperson of New Faces New Voices, Rwanda chapter. The organization promotes the access to finance among women.

She is also the vice president of Unity Club, an organization of Rwandan leaders and their spouses.

Both the African Union Commission Chairperson and the Deputy chairperson are elected for a-4 year term renewable once.