KAMPALA – Judicial Officers and staff at the Civil Division of the High Court earlier this week held a luncheon at the Division to bid farewell to the outgoing head, Justice Micheal Elubu.

The judge was recently transferred to become the new head of the Criminal Division in Kampala.

The occasion was also used to welcome its new leaders, Judges, Musa Sekaana and Emmanuel Baguma who take on the positions of the head and deputy head of the Division respectively.

The do was also to formally welcome new Judges; Philip Odoki and Boniface Wamala.

In his farewell remarks, Justice Elubu emphasized the need for teamwork.

“For everything that you attain, you thank the Lord, because you can never achieve anything alone,” he said.

Justice Elubu went on to thank the staff for every milestone achieved by the Division saying it was a joint effort.

“Nothing can ever be achieved by the judges without the administrative staff. Every one of you has a vital role to play, to ensure that the Civil Division thrives,” he said.

He congratulated Judges Sekaana and Baguma upon their elevations, and thanked the staff and his colleagues, for the one year they have spent together and promised that they will always be the people close to his heart.

Justice Sekaana thanked the staff for their efforts in ensuring that the luncheon was a success.

“We need to appreciate each other in whatever we do, consulting and protecting each other and ensuring that we do what is right for this country. We face challenges but we address them as a team,” he stated. Adding that he had benefited from his predecessor’s open-door policy. 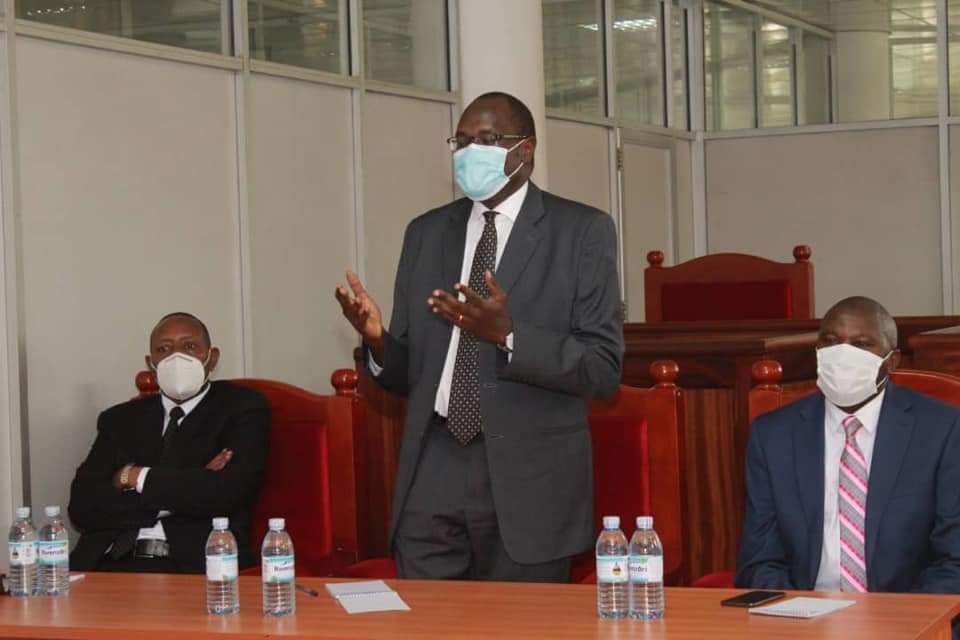 On his part, Justice Baguma said the change was part of life and as such must be accepted. He appreciated Justice Elubu for mentoring others including fellow judges.

Sharing Justice Elubu’s journey at the Judiciary which started in Kabale where he was posted as Resident Judge, Judge Baguma said he was confident that the new head of the Criminal Division was going to “write another chapter of his life and shine”.

Ag. Assistant Registrar, Agnes Alum, said Judge Elubu would be greatly missed by all at the Division, a feeling which was re-echoed by the administrative staff.

In recognition of his services, the Division presented to Justice Elubu an award for exemplary service.

Justice Esta Nambayo witnessed the event which was crowned with cake-cutting.