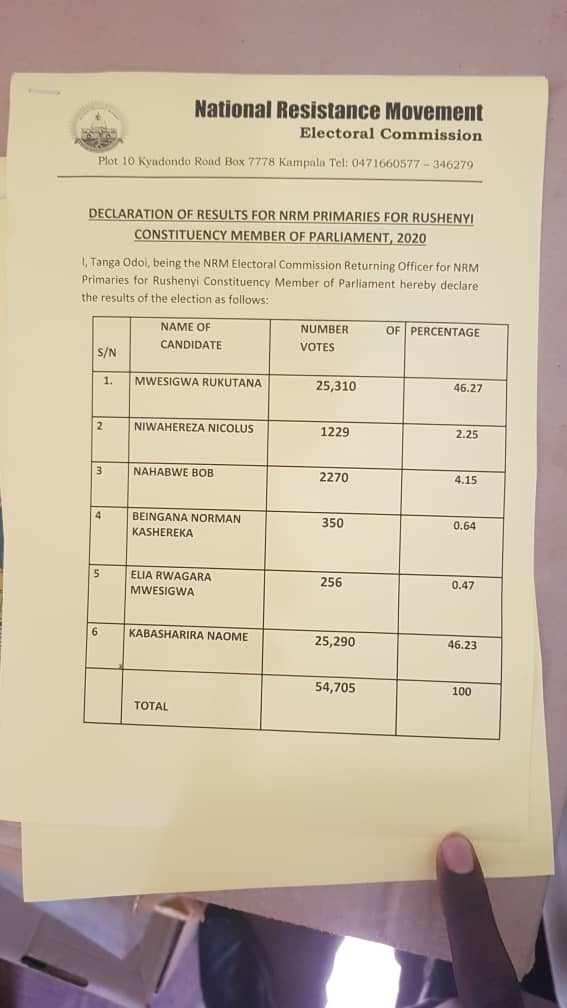 Mr Odoi last week announced that Mr. Rukutana, jailed earlier in the month over poll violence was leadibf Ms Naome Kabasharira.
Ms Kabasharira had on Septembr 5 been declared winner with 24,006 votes while Mr. Rukutana garnered 23,966 votes leaving a difference of only 40 votes.
While Mr Rukutana had rejected the out-come of the election, the aftermath was overshadowed by an incident where he was caught on video, appearing to draw a gun against two campaign agents of his opponent. The minister was eventually arrested, charged with attempted murder and remanded.
However, upon his release on bail on Tuesday, 15 September 2020, Dr Tanga announced that following a recount of 12 polling areas, the minister is now in the lead.

For over a week, residents of Rushenyi County, Rwahi, Rubaare and Rwentobo town councils in Ntungamo district have been protesting the declaration of the poll results placing the incumbent Rukutana in the lead with 20 votes.
The voters have been blocking Ntungamo-Kabale road for the past four days protesting the delayed declaration of the final poll results. Odoi says there is suspicion that one of the candidates is behind the demonstrations.