KAMPALA – City Attorney Muwada Nkunyingi of Muwada & Co. Advocates has on Monday, August 24, requested the Electoral Commission(EC) to avail him with the certified copies of the academic papers presented by President Museveni for his 2016 nominations, as war on papers take a new twist.

The development comes after controversial city lawyer Male Mabirizi asked and was availed the same documents of presidential hopeful Robert Kyagulanyi Ssentamu alias Bobi Wine from the electoral body and prpomptly shared them with the public claiming the latter doesn’t qualify to stand for presidency because they(documents) were “purpotedly” fortged and his records dont add up.

According to Muwada, the EC must not only organise and supervise elections but must independently adhere to the set statutory framework to which Museveni is presumed to have presented verified documents before nomination as a presidential candidate in 2016.

“It is a known historical fact that Museveni initially ascended to the presidency by force and was never vetted. The promulgation of the 1995 Constitution incorporated statutory minimum academic requirements. Being that he still remained the appointing authority of those to vet his papers,” he said in a statement dated August 24. 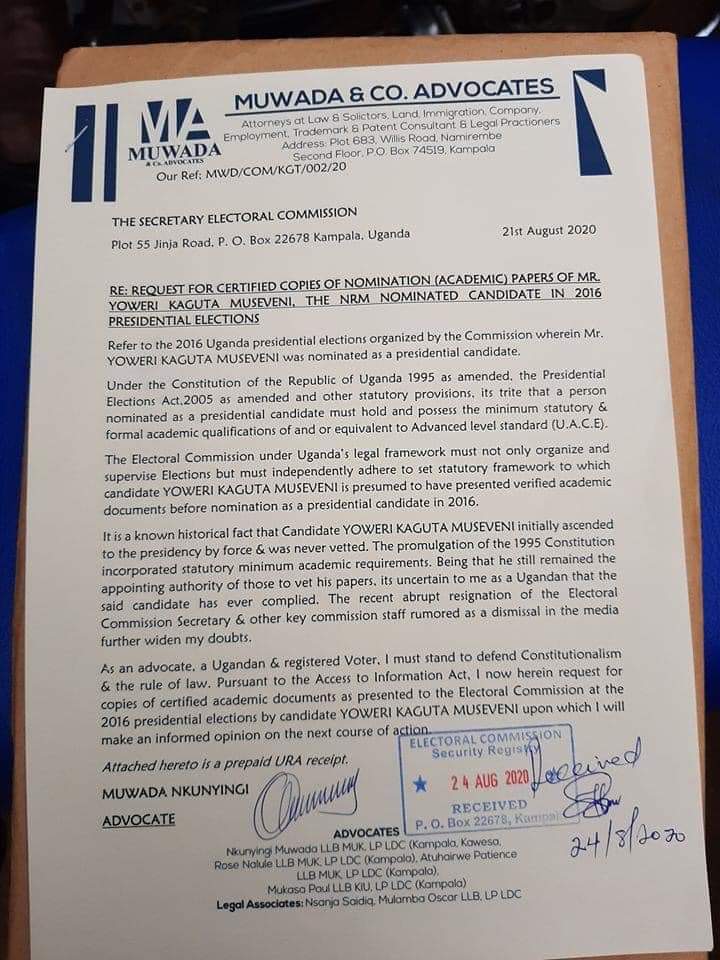 He further questioned the recent resignation of the EC secretary and other staff that was rumoured as a dismissal in the media claiming it further widens his doubts.

Mawada noted that as an advocate, Ugandan and registered voter, he must stand to defend the Constitution and the rule of law.

“I now herein request for copies of certified academic documents as presented to the EC at the 2016 presidential elections by candidate Museveni upon which I will make an informed opinion on the next course of action,” said Mawada.

Under the Constitution of Uganda, the Presidential Elections Act 2003, as amended and other statutory provisions, it’s trite that a person nominated as a presidential candidate must hold and posses the minimum statutory and formal academic qualifications of and or equivalent to Advanced level standard (UACE).