BUJUMBURA – The widow of the late Burundi president Pierre Nkurunziza, Denise Bucumi, returned to the country on Tuesday evening following the death of her husband, the BBC reported.

Her return came just hours after the Burundian government announced that her husband and outgoing president Nkurunzinza had died of a heart attack.

The BBC, quoting an unnamed source, reports that the First Lady was discharged from the private hospital in Kenya on Tuesday.

Denise Nkurunziza had been airlifted to the Kenyan capital, Nairobi, last month for medical treatment.

Kenya’s Daily Nation, reports that Mrs. Nkurunziza was being treated at the Aga Khan University Hospital for COVID-19 and an underlying condition.

Mrs. Nkurunziza, a mother of five and devout Christian, is popular in the country for her philanthropic work through her foundation called Buntu.

Nkurunziza, 55, who was due to step down in August after 15 years in power, will be succeeded by Evariste Ndayishimiye who won the May 20 presidential election.

The government declared seven days of national mourning for the late leader. 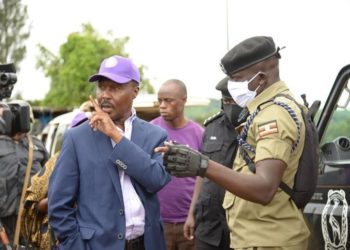