KAMPALA- The Next Media Services, owners of NBS Television have re-assured staff that their jobs, salaries and other benefits will be maintained amid the Coronavirus crisis that has forced peer giant media houses to announce huge salary cuts.

In May 1, labour day message to staff Chief Executive Officer Mr. Kin Kariisa, said,
“To all of us as a whole, be at peace. Your jobs with us as well as your salaries will remain as agreed in your respective contracts. This applies to your benefits as well,” Mr. Kariisa wrote. 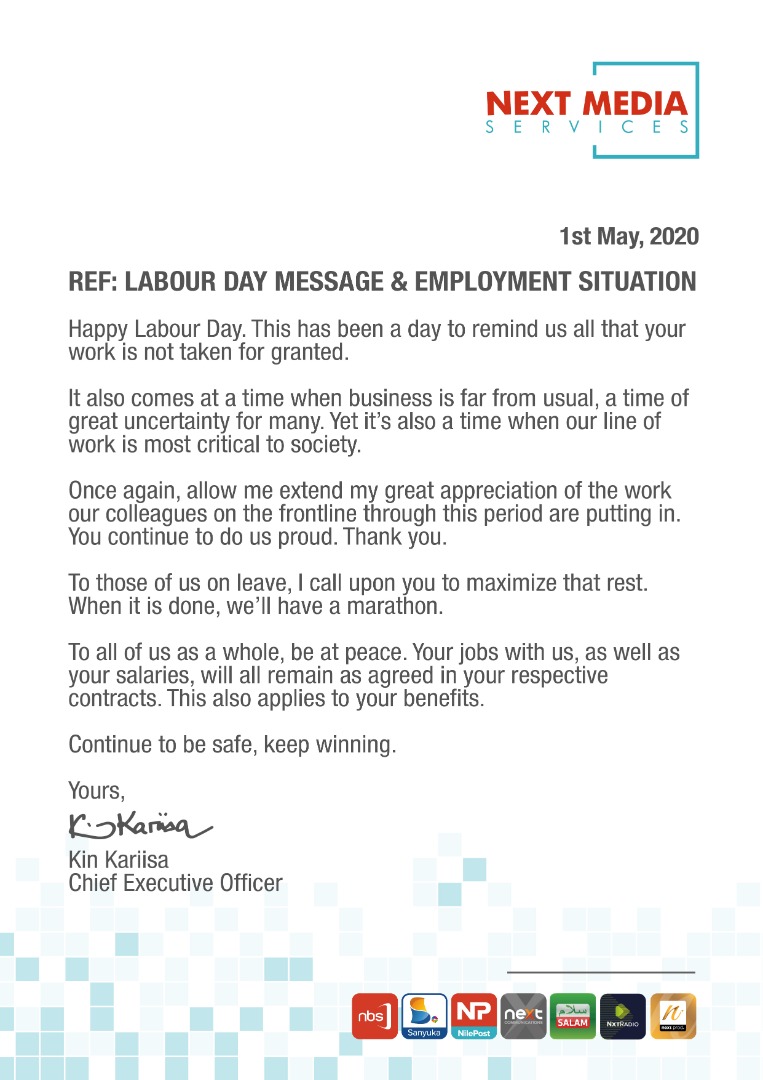 Vision Group Chief Executive Officer Robert Kabushenga, in a letter dated April 30, informed all staff that the business has been negatively impacted by the response to the COVID-19 pandemic in a more severe manner than could have been foreseen.

The Vision boss adds that employees will receive full pay for the month of April 2020 but will effect gross salary reduction effective May 2020 of 60% for employees “who earn above Shs19m, 45% for those between Shs8m-9m and 40% for those who earn below Shs8m.”
“This position will remain in place until further notice,” he wrote.

For NMG Kenya, the CEO, Steven Gitagama said all staff earning above Kshs50,000 (about UGX1.7m) will suffer a cut, which will be determined by the company.

The pay cut ranges from 5% for the lower end of the target group and 35% for the high-end, including the CEO, Mr Stephen Gitagama. Even directors have taken a pay cut on their earnings.

NMG Kenya on the other hand owns Daily Nation and NTV Kenya, among other Swahili publications and radio stations. It’s sister company is NMG Uganda under which Daily Monitor, NTV Uganda, Enyanda, KFM, Dembe FM, and other companies fall.