According to UPDF Spokesperson Brig Richard Karemire, amongst those who appeared before a five member court team under the chairmanship of Col Sam Mugyenyi, were 07 LDUs who were accused of beating Wanainchi during the enforcement of presidential directives on COVID-19.

This went against the laws of Uganda under section 119 of the penal code act,” he said in a statement.

He added that all the 6 accused pleaded guilty and were convicted on their own plea. 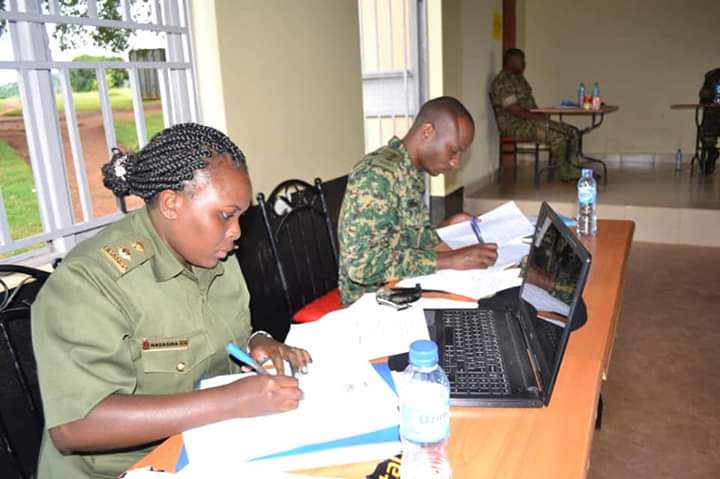 “The defense counsel Mrs. Merian Kansime mitigated and prayed for a lighter sentence on ground that, common assault (charge against them) was misdemeanor, the accused were first offenders, did not waste court’s time, were repentant and remorseful, and had families to fend for,” reads an excerpt.

On his part, the court prosecutor submitted that, the actions of the six accused went against the established UPDF code of conduct which portrayed UPDF as a brutal force. He therefore prayed for an appropriate sentence against the accused.

After deliberations, court sentenced the six accused to 2 months detention.
The seventh LDU Mulaalo Rashid was charged on two counts, desertion and common assault. He was convicted on the second count and sentenced to 6 months imprisonment. Court could not hear the first charge, since hearing of a capital offence required the presence of the 7 member quoram.

Court also heard charges against civilian Atuzarirwe Emanuel who was found wearing a UPDF plain uniform contrary to section 164 of the UPDF act.

He was convicted on, his own plea and sentenced to two years imprisonment.

“Several civilians, on several occasions have been arrested donning uniforms, an act against the law,” reads the statement in part Mr Karemire noted that L/Cpl Okwi Emmanuel of Kawempe battallion was charged with failure to execute one’s duty contrary to the UPDF act.

“His case could not be heard by a five member court since its capital in nature,” said Karemire.

All the convicts have 14 days to appeal the convictions to the General court martial Mr Karemire has confirmed.