KAMPALA — The State Minister for Lands Persis Namuganza has been dragged into Entebbe Busembaga Land wrangle, with the ‘rightful’ owners accusing her of conniving with ‘powerful forces’ to grab land using their positions.

The ‘powerful forces’ working the minister have grabbed the said land without any color of right and are threatening the owners.

Ms. Margaret Coutinho Kigundu claims whereas her family was decreed as the lawful and registered owners of the land some people including Minister Namuganza have grabbed it without any color of right and “are threatening the owners.”

She adds that the forces working with the minister took advantage of lockdown and a ban on public transport to erect illegal structures including a construction of a wall.

In a public notice issued last month in one of the papers, the family that cautioned members of the public that the said land and developments thereon are not on sale and that no body should deal with any person in respect of the same.

A letter dated March 27 from the office of the Inspector General of Police signed by Chepkurui Shunu Jimmy on behalf of IGP, Kampala Metropolitan Area Commandant was interested in the matter. 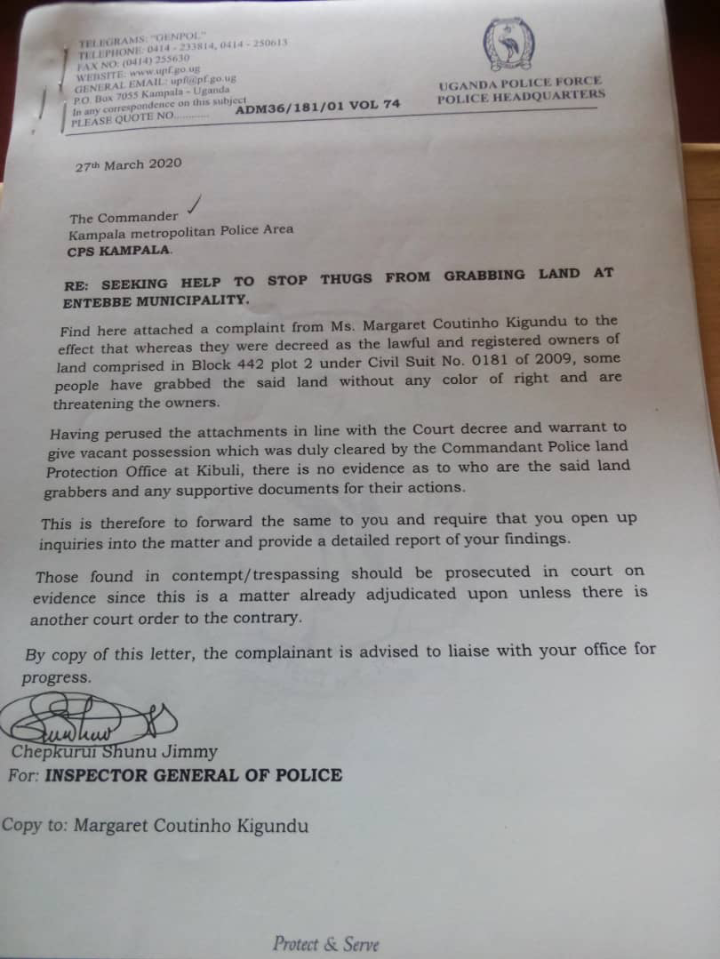 He was also directed to study the matter and provide a detailed report of his findings.

“Those found in contempt/trespassing should be prosecuted in court on evidence since this is a matter already adjudicated upon unless there is another court order to the contrary,” the IGP directed.

Ms. Namuganza denied the allegations of land grabbing and accused the family of transferring their family graveyards to the said site after which they claimed ownership.