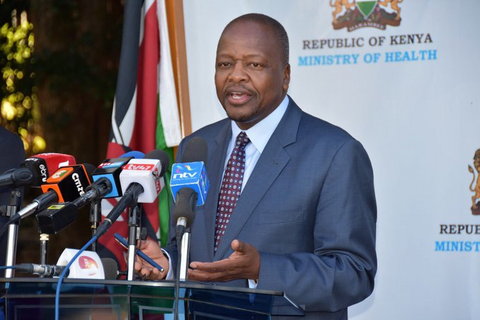 Health Cabinet Secretary Mutahi Kagwe has announced 11 new cases of coronavirus patients in Kenya (PHOTO/Courtesy)NAIROBI — Kenya has announced that 11 individuals had tested positive for COVID-19, on Monday April 20, bringing the total number of confirmed infections to 281.

Of the 11 new cases, seven are from Mombasa while the other four Nairobi.

“None have a history of travel. The seven are from our quarantine centres while the four were picked by surveillance teams in Ruaka,” Health Minister Mutabi Kagwe is quoted as saying.

He said that the ages of the new individuals ranged between 11 and 80 years.

CS Kagwe also reported that two patients have recovered adding that one of the two is a doctor.

“Our success in treatment is highly dependent on our ability to protect our frontline workers in this fight. We have distributed 4,759 Personal Protective Equipment (PPEs) & 237 assorted components. We have trained over 30,000 health workers & the training is still ongoing,” he announced

He also revealed that there had been two more recoveries, bringing the total tally of recovered individuals to 69.

Prof. Nawangwe: The Ivory Tower will be restored in the shortest time possible

I did not send them! Museveni warns relatives causing mayhem in NRM polls as he cancels nephew Kangwagye’s victory in Bukanga