KIGALI — President Paul Kagame said Saturday he held a “good” discussion with the US President Donald Trump in which the former expressed gratitude towards America’s support to Rwanda in the fight against the new coronavirus.

“I just had a good conversation with President @realDonaldTrump,” the head of state said in a tweet.

“We discussed our good relationship, and the support he personally, and his administration are extending to Rwanda to combat the #COVID19 pandemic,” he added.

This comes following the announcement of the US government’s extra financial support worth $4 million towards Rwanda’s public health sector on Friday, April 24.

The U.S. Embassy in Kigali said Friday that additional emergency funding towards Rwanda’s COVID-19 response would expand the government’s ability to support health needs during the current pandemic. 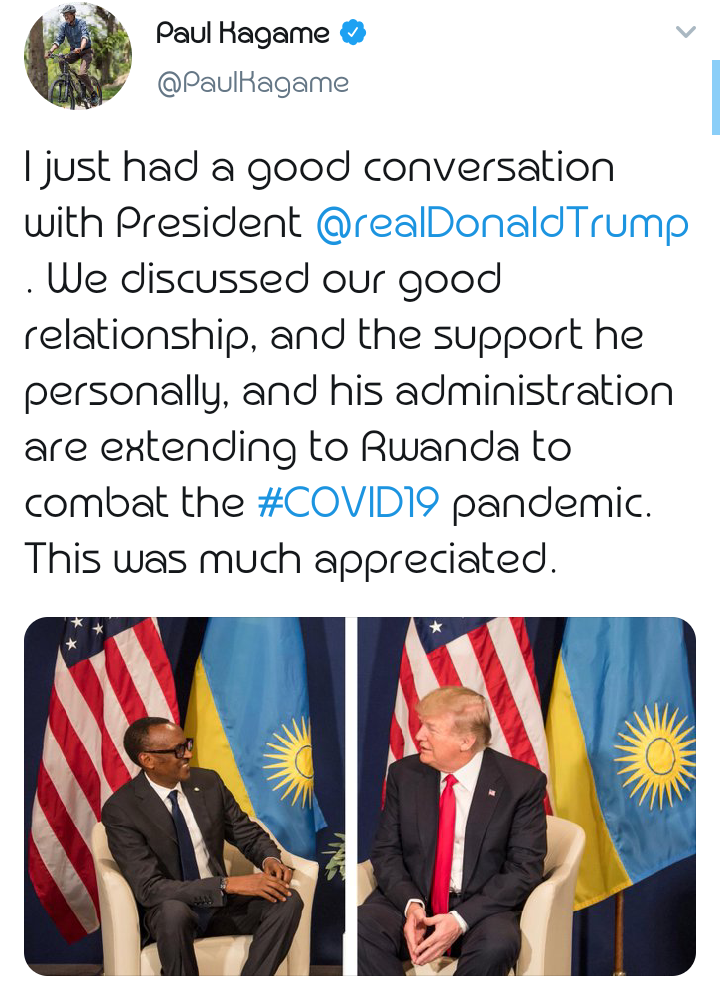 The US said at least $3 million (Rwf2.8 billion) was directly awarded from the U.S. Centers for Disease Control and Prevention (CDC) to the Rwanda Biomedical Center (RBC).

Those funds, they said, would increase laboratory diagnostic capacity and biosafety, enhance central and district-level surveillance, and strengthen infection, prevention, and control for acute respiratory infections.

“An additional $700,000 dollars (Rwf650 million) from the U.S. Agency for International Development will augment the $1 million in assistance through our Ingobyi health program announced on April 4,” the statement from the embassy read in part.

This USAID emergency health assistance will help with surveillance and case management efforts in support of the Government of Rwanda’s COVID-19 National Preparedness and Response Plan.

The announcement also included nearly $500,000 in additional funding from the Department of State to support refugees in Rwanda.

“The United States is proud of the strong partnership that we have with Rwanda in public health,” the U.S. Ambassador Peter Vrooman said in a statement.

“We are taking an ‘All-of-America’ approach to addressing this crisis. Together we will overcome this outbreak,” he added.

The United States is Rwanda’s partner in public health, with funds worth more than $1.5 billion invested in public health in Rwanda in the past 20 years, according to the embassy.