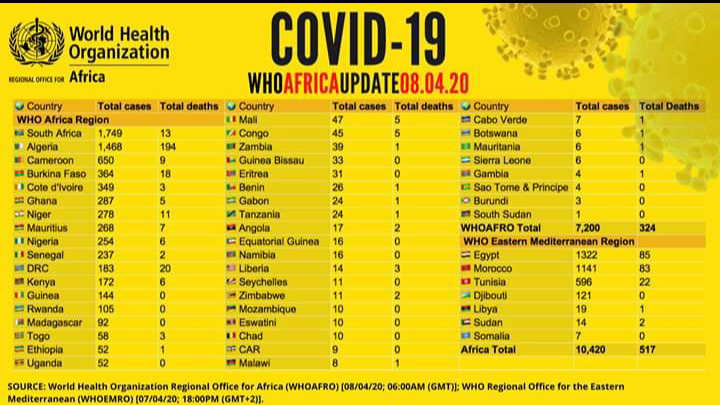 KAMPALA — The number of confirmed COVID-19 cases in Africa has risen to more than 10,000 and caused more than 500 deaths.

While the virus was slow to reach the continent compared to other parts of the world, infection has grown exponentially in recent weeks and continues to spread.

Reaching the continent through travellers returning from hotspots in Asia, Europe and the United States, Africa’s first COVID-19 case was recorded in Egypt on 14 February.

Since then a total of 52 countries have reported cases. Initially, mainly confined to capital cities, a significant number of countries in Africa are now reporting cases in multiple provinces including those in the countryside.

“COVID-19 has the potential not only to cause thousands of deaths, but to also unleash economic and social devastation. Its spread beyond major cities means the opening of a new front in our fight against this virus,” said Dr Matshidiso Moeti, World Health Organization (WHO) Regional Director for Africa.

“This requires a decentralised response, which is tailored to the local context. Communities need to be empowered, and provincial and district levels of government need to ensure they have the resources and expertise to respond to outbreaks locally.”

WHO is working with governments across Africa to scale up their capacities in critical response areas such as coordination, surveillance, testing, isolation, case management, contact tracing, infection prevention and control, risk communication and community engagement, and laboratory capacity.

WHO says the combined measures will ensure the rapid identification of cases, the tracking down and quarantining of contacts and the isolation and treatment of patients.

“It is also crucial that people are provided with accurate information which will promote healthy behaviours”.

“Protection of health workers is a vital component of the response and when governments implement physical distancing measures, the basic needs of people should be taken into account.”

“Africa still has an opportunity to reduce and slow down disease transmission. All countries must rapidly accelerate and scale up a comprehensive response to the pandemic, including an appropriate combination of proven public health and physical distancing measures. Within that process, Member States should target effective control of the outbreak, but plan for the worst,” said Dr Ahmed Al-Mandhari, WHO Regional Director for the Eastern Mediterranean.

“Early isolation of all cases, including mild cases, is one of the key control measures, along with early detection, early treatment and contact tracing. Timely and accurate epidemiological data is one of the most important tools to inform and drive the response. We must protect our health care workers and ensure that they are appropriately equipped – they are on the front lines and need our unwavering support. We owe them a great deal.”

Africa Cup of Nations to take place in Cameroon as scheduled