KAMPALA – The Permanent Secretary at the Ministry of Health,l Dr. Diana Atwine has asked police to arrest and prosecute city Pastor Augustine Yiga, who said in a Friday broadcast that the Coronavirus pandemic is a hoax.

Dr. Atwine also wants the Uganda Communications Commission (UCC) to take action on the Pastor and his ABS TV station which aired his programme rubbishing reports of the existence of COVID-19 pandemic in Africa.

Via her Twitter handle, Dr. Atwine says “UCC and police need to help bring this person to book”.
In the same twitter conversation, the police Director AIGP Asan Kasigye said the “CID would take up the matter”.

In the clip making rounds on social media, Pastor Yiga while using his television station ABS TV even dared the government to arrest and imprison him, but vowed not to change his opinion about the non-existence of Coronavirus in not only Uganda but Africa at large.

He said, “Whether Government imprisons me, I don’t care, but I am speaking the truth, there is no Coronavirus in Uganda. They say Rwanda has over 40 cases, how comes no one has passed on? Do they want to say Rwanda has better treatment than China and Italy?”
Yiga added, “The President said Uganda has 18 cases and that they’re responding to treatment, does he want to say Uganda has better treatment than Italy, China, and the US? Has Tanzania reported any deaths? Kenya reported one death but I think the victim died from other complications not Coronavirus. Coronavirus is this common flue and cold that Africans have grown up with.”

Data from Africa’s Centre for Disease Control (CDC) indicated that as per 5 Pm, 27th March 2020, 46 countries in Africa had confirmed cases totaling to 3426, with 94deaths and 253 recoveries. 24 countries have closed their borders in Africa. 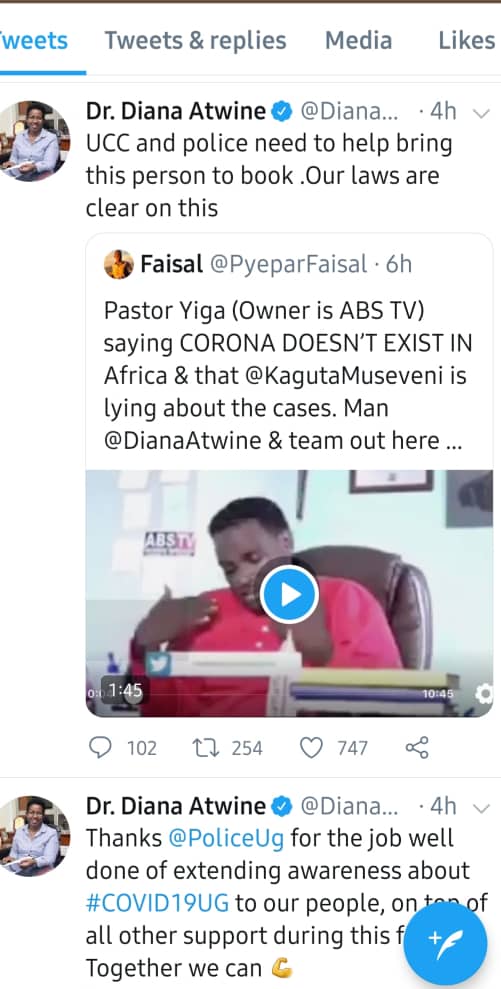 Pastor Yiga’s remarks come after the NTV Uganda was forced to issue an apology following criticism of hosting Simon Senyonga, one of the church leaders of Zoe Ministries in its morning show where he asked Ugandans not to listen the Ministry of Health guidelines but rather Prophet Mbonye.

If arrested, Yiga is likely to be charged under section 171 of the Ugandan Penal Code Act, Cap. 120 which stipulates, “Any person who unlawfully or negligently does an act which is or which he or she knows or has a reason to believe to be likely to spread the infection of another disease dangerous to life commits and offence and is liable to imprisonment for seven years.”