KAMPALA – Outgoing Commissioner General of the Uganda Revenue Authority (URA) Doris Akol has thanked her subordinates for supporting her during her five-year term in office.

In an email sent to staff on Sunday, March 29, Ms Akol also asked her colleagues to support her successor, Mr John Musinguzi.

His Excellency has just appointed Mr John Musinguzi as the new Commissioner-General with immediate effect. Lets welcome Mr Musingizi to the URA family and render him utmost support,” she wrote.

“It has been an absolute honour and privilege to be your team leader for 5 years and 5 months. Thank you for loving me, for supporting me and for being loyal to me.

May God bless you all. The struggle to liberate our country continues,” she added.

“By virtue of powers granted to me by the Constitution, I have appointed John Musinguzi Rujoki as the new Commissioner General of URA. This appointment takes immediate effect,” Museveni posted on his social media pages on Sunday, March 29. 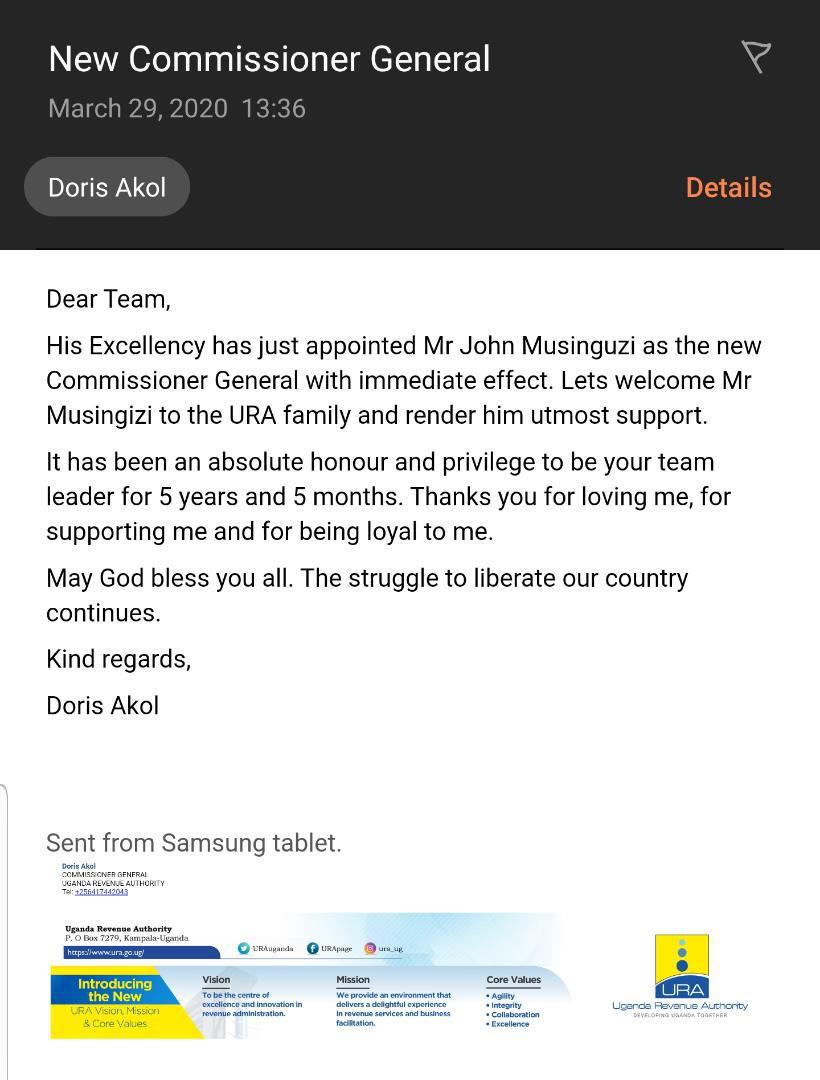 Mr. Musinguzi holds a Master’s degree in Computing and Information systems of the University of Greenwich and a Bachelor of Science in Mathematics of Makerere University.

He is the Senior Presidential Advisor on ICT and Investment.

Following her graduation from the Law Development Centre in 1994, Akol spent one year at PricewaterhouseCoopers, at their Kampala offices. In 1995, she joined URA, as a Legal Officer. From 2012 until 2014, Doris Akol was the Commissioner for Legal Affairs and Board Matters at the Uganda Revenue Authority. In that capacity, she also served as the Company’s Legal Secretary. In October 2014, she was appointed Commissioner general at URA.She assumed her new office on 30 October 2014.