BUNDIBUGYO – The Coca-Cola Company, through Coca-Cola Beverages Africa in Uganda has contributed 580 kits of Non-Food Relief Items towards the Bundibugyo floods affected families. The kits have been extended to the communities through the Uganda Red Cross Society, the humanitarian agency mandated by the Government to support the internally displaced communities in December 2019.

This followed a heavy downpour between 6th and 7th December which devasted the entire district.

A total of 1,152 households composed of 6,768 individuals were affected, 18 bodies retrieved, and left many homeless. Over 800 households became displaced and occupied churches and nearby school buildings, while others coped through their extended family members in safer communities.

The Government gazetted Semuliki Secondary School and Bubkwanga Camp to accommodate those displaced/homeless and Uganda Red Cross offered humanitarian lifeline services for a period of two months. Today, a lot has changed. When the rains normalized, some people developed coping mechanisms and have since moved to live with relatives, some re-built their homes, while others are still struggling.

“This is how Coca-Cola came on board. We are happy to extend a note of appreciation for the support offered to the people of Bundibugyo through The Coca-Cola Company. Thank you for responding to our call when we approached you. I know and trust that the people of Bundibugyo will use these kits to cope and recover from the shock they went through when the disaster hit them.” Said Robert Kwesiga, Uganda Red Cross Secretary-General. 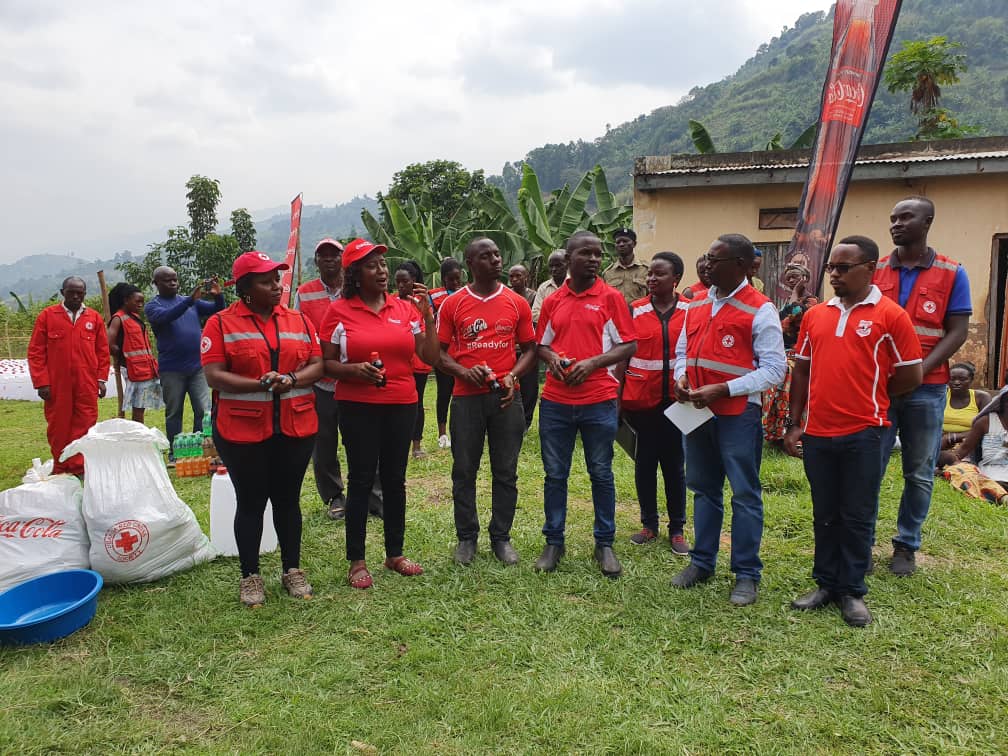 While addressing the press at Harugare Sub-County offices, Ms. Maureen Kyomuhendo the Public Affairs & Communications Manager at Coca-Cola Beverages Africa said; “As Coca-Cola, we deeply understand the impact of these devastating floods because we live, work and serve in these communities every day. As a responsible corporate entity, we were compelled to improve the lives of the impacted families.

In a message delivered on behalf of the General Manager Coca-Cola Beverages Africa in Uganda, Mr. Melkamu Abebe, reading in part “On behalf of the management & staff of Coca-Cola, please accept our humble contribution of relief items that we urgently mobilised using available resources. We have worked with our partners to provide the national recommended standard kits. We thank the Red Cross for having supported you through the tough time and for being a partner in emergency response. We hope that the donated relief kits will go a long way in restoring and improving your lives.”