KAMPALA – The speaker of Parliament of Uganda Rebecca Kadaga will officially launch the World Wild Fund for Natures’ Earth Hour 2020’ environmental campaign which will see the body intensify a colossal campaign against plastic pollution.

The Fund’s campaign aims at fighting the adverse effects emanating from plastic pollution which is high in the country.

WWF is mobilizing one million people march starting at 9 am on Thursday, February 13 to be held under the theme “No to plastic and Kaveera Pollution, let Uganda breathe.”

Conservationists will walk from Kampala City Square to Kampala Capital City Authority (KCCA) grounds – Lugogo- a distance of five kilometers-reinforcing the message on based on the 3R approach of reducing, reusing and recycling

Mr. David Duli, the WWF Uganda Country Director said the campaign will address the effects of massive plastic use, and disposal, noting that they are now pushing policymakers to seriously consider the matter.

Mr. Duli also called for a change of practice as his organization spearheads a massive campaign dubbed plastic-free conferences and workshops, a development he says will not only reduce plastic consumption but will also influence the way manufacturers package their products.

The one million people march whose aim is to reinforces the campaign against plastic pollution will bring together sustainability and environmental experts from some of the biggest companies and government —calling for practical and innovative solutions to tackle the growing plastic pollution crisis.

Duli says the current legal regime on pollution and waste management should be re-enforced to provide measures to protect and preserve the environment from abuse, pollution, and degradation.

“A lot of emphasis is needed to manage the environment for sustainable development and to promote environmental awareness initiating programs aimed at stimulating a sound material cycle society that is based on the 3R approach of reducing, reusing and recycling,” he said.

Happy noted that they have embarked on a robust sensitization program to make the population aware of the dangers associated with plastic waste.

Plastic waste disposal is on the increase. It is estimated that more 600 tonnes of plastic is disposed of in Uganda daily. Kampala city alone accounts for the vast chunk of plastic waste, which is littered all over the city and clogging sewage systems, according to the National Environment Management Authority.

About 51% of the plastic garbage in the city is left uncollected and ends up in drainage channels, wetlands, natural watercourses, manholes, undeveloped plots and on the roadside. In the rural areas, it is a sad story; plastic garbage in most cases left to decompose on its own. 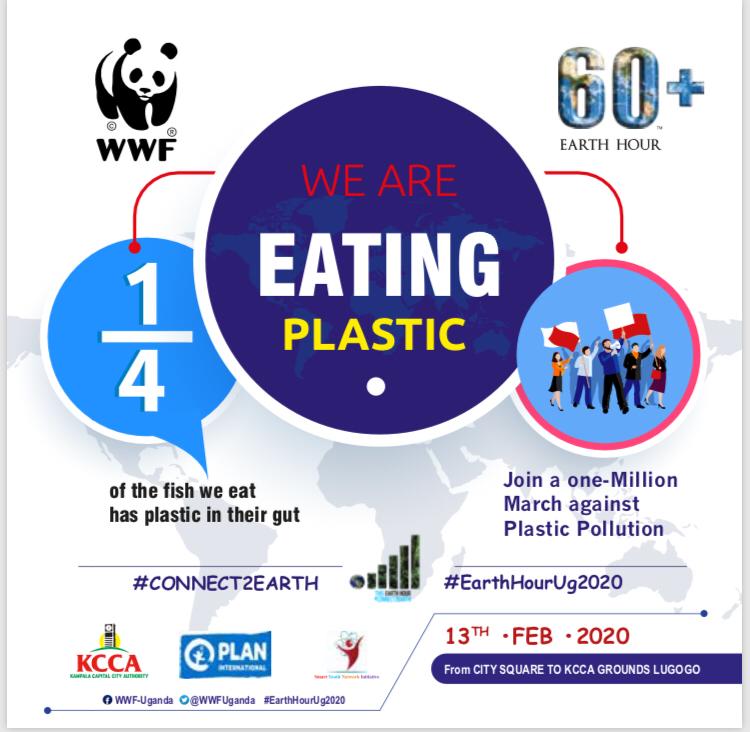 It must be noted that plastic waste endangers human life, animals and the environment if it is not well controlled and disposed of in a proper manner. Pollution from plastics is less visible and therefore our decision-makers or policymakers do not see it as a priority yet it is a silent’ killer.

The impacts of plastic waste are both direct and indirect and they include climatic change as the major impact on the environment, the biomass and fossil fuels that cause air pollution have also caused the earth’s atmosphere warming resulting from the release of greenhouse gasses, health impacts, and damage of the wetland ecosystem.