KAMPALA- The Police have on Monday, February 24 denied accusations that their patrol vehicle
knocked and led to death of Ritah Nabukenta, a People power supporter.

Ms Nabukenya a resident of Bunamwaya was on Monday morning knocked as she went to court where the nascent political organisation had a matter being decided.

People Power leaders including MP Robert Kyagulanyi aka Bobi Wine blamed the death on police but Kampala Metropolitan police denied the accusation, saying in a statement that the activist was killed by a boda boda.

“In the accident, motor cycle UEY 675P was trying to overtake our patrol vehicle number UP 4841, but unfortunately, collided with another motorcycle whose registration was not captured immediately because he fled the scene,” said spokesman Fred Enanga.

Accordingly, the deceased was rushed to Mulago hospital by police patrol car after she sustained serious injuries when she fell off the motorcycle.

“We have gotten to learn that Nabukenya Rita succumbed to the injuries she sustained during this accident and passed on,” read an excerpt. 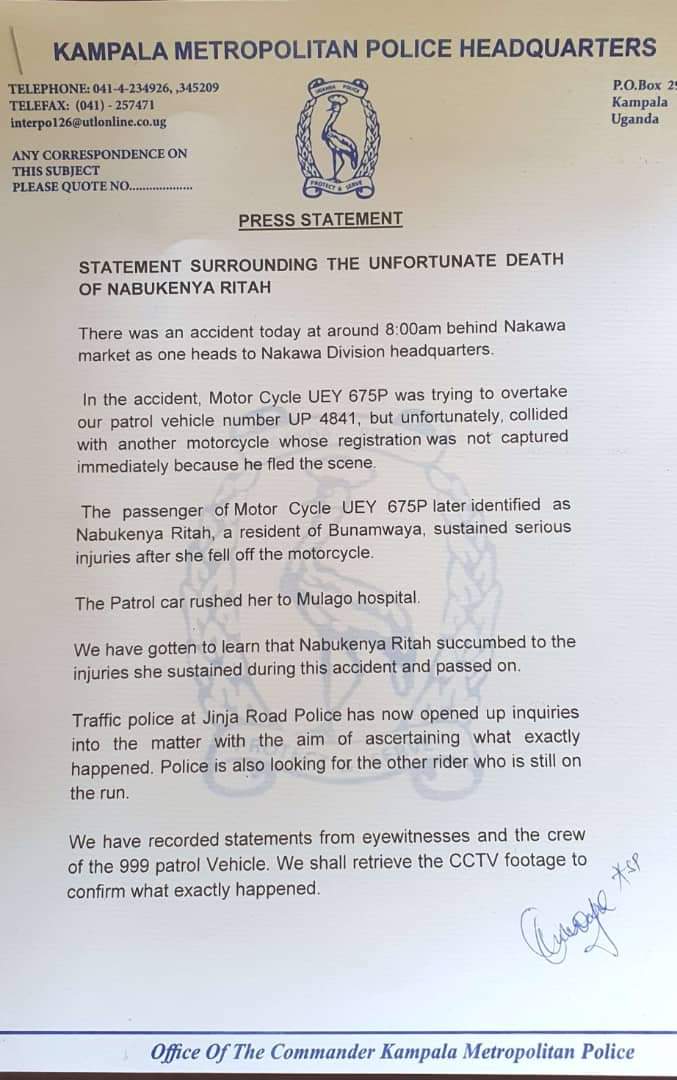 Enanga further revealed that traffic police at Jinja Police station have opened up inquiries into the matter to ascertain what exactly happened.

He added that, “Police is also looking for the other rider who is still on the run.”

“Yet again, our supporter and leader in the People power movement has been run over and killed by police. Nabukenya Rita was on her way to Kampala on a motorcycle when police spotted her and ran after her. We shall and must end Museveni’s murderous regime. This MUST end,” reads the post.