Did you know that genes could be used to inform us how many years a person living with HIV will take to develop AIDS if he or she is not on treatment? A new study titled: ‘Functional host-genetic loci associated with pediatric HIV-disease progression in Uganda and Botswana’ by Dr. Gerald Mboowa of Makerere University is finding it possible. His research reveals that after a person is infected with HIV, they are either characterized as Rapid-AIDS progressors (RP) or Long-term non-progressors (LTNP).

Rapid progressors develop AIDS symptoms in three years or less after infection whereas the LTNP take more than 10 years to develop symptoms without HIV-treatment.

This research included collecting 314 blood samples (173 from the RP group and 141 from the LTNP), testing them and identifying genes that were common in each of the two groups. A total of 1000 blood samples is expected to be tested before the end of this year.

“After identifying the gene, we’ll use it to screen people who are already infected with HIV to ascertain whether they rapidly progress or will delay progressing to AIDS,” Dr. Mboowa said in an interview.

This ‘gene test’ is timely because it will ensure that health workers prioritize treatment for those in most need (those who rapidly progress towards AIDS). According to Dr. Mboowa, children ought to be prioritized in regard to treatment owing to the fact that they have a weaker immune system compared to adults and have many years to live and benefit.

According to 2018 data from UNAIDS, Uganda has a 67% Anti-Retroviral Therapy (ART) coverage. This puts the country at a lower threshold than the globally set target of 90% of all people diagnosed with HIV being sustained on ART by 2020. In 2018, an estimated 1.4 million Ugandans were living with HIV, and an estimated 23,000 Ugandans died of AIDS-related illnesses. 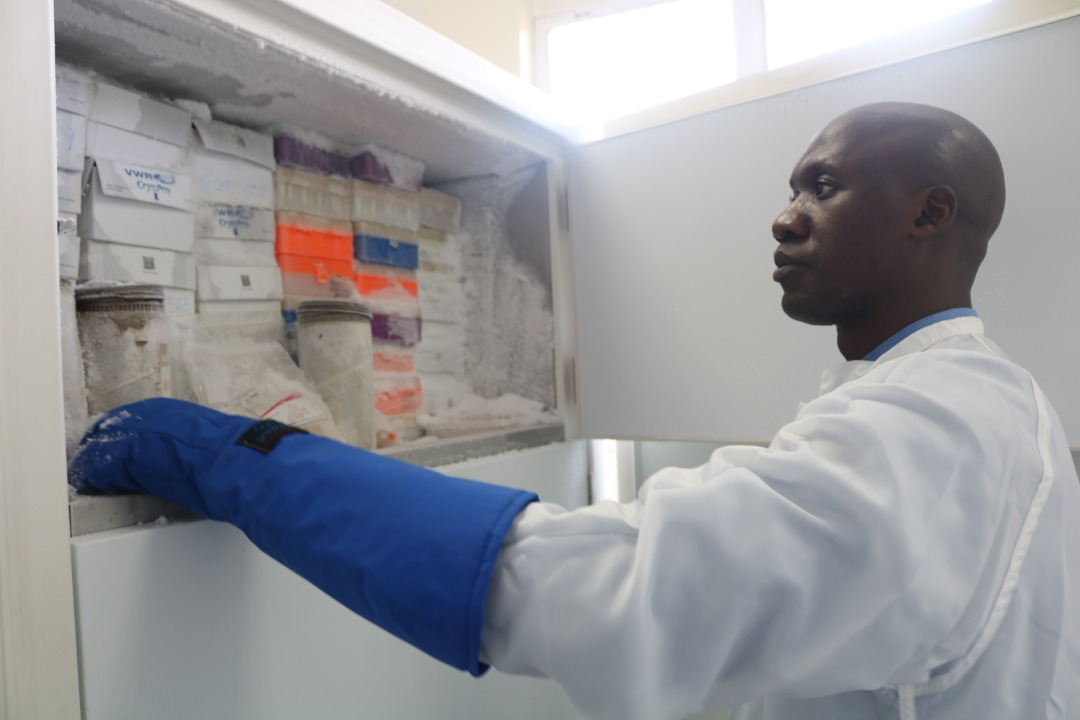 Therefore, the findings from Dr. Mboowa’s study have implications for the current “Test-and-Treat and Treat-for-Life” HIV-treatment policy. Currently, when one tests HIV-positive and is started on treatment for life, it exposes them to the ART long term side effects such as liver and kidney damage. However, some HIV-infected people have natural ability to stay for many years without developing symptoms in absence of HIV-treatment.

“Prioritizing treatment for those most in need will minimize exposure to side effects associated with long term use of ART among people with natural ability to stay long without developing symptoms,” he says.

When fully developed, the ‘gene test’ will be a major innovation breakthrough in screening people living with HIV and the first of its kind globally. Looking ahead, Dr. Mboowa has developed a computer-based program that he is using to scan and detect characteristics of the gene common in both the RPs and LTNPs.

Dr. Mboowa’s study was funded by the Collaborative African Genomics Network (CAfGEN) and Training Health Researchers into Vocational Excellence in East Africa (THRiVE). He is currently a bioinformatics scientist at the African Center of Excellence in Bioinformatics and Data-Intensive Sciences of the Infectious Disease Institute at Makerere University.