KAMPALA – Six men were on Thursday, January 23 charged in connection to SIM boxing and electronic fraud in a scheme that is estimated to have caused massive losses to telecom firms and the government in would be revenues.

Appearing at Buganda Road Court before magistrates Stella Amabillisi and Marion Mangeni, at least three of the suspects pleaded guilty to all the counts slapped on them by the State that included operating a telecommunications apparatus without a license, electronic fraud, and abetment of unauthorized use of computer services.

During a covert, the operation conducted by the Uganda Communication Commission (UCC) and Uganda Police Force last weekend in which eight suspects engaged in SIM boxing, a form of electronic fraud, were apprehended. UCC head of legal who represented the State said two of the suspects were released on police bond after questioning.

“We established that the other two we released on [Police] bond didn’t play an active role in this scheme but were still investigating,” he said when questioned by PML Daily journalist.

The state contends that the six and others still at large between June 2019 and January 2020, within Kampala district unlawfully used computer devices to intercept and terminate international calls in Uganda, causing financial loss of UGX. 179.8m to Government.

City lawyer Tom Tegule who represented Edward Mutyaba asked the court to consider punishing his client with financial punishment than custodial as he has a very youthful family that needs him most.

The court will on January 29, deliver judgment for the accused who pleaded guilty to the charges. 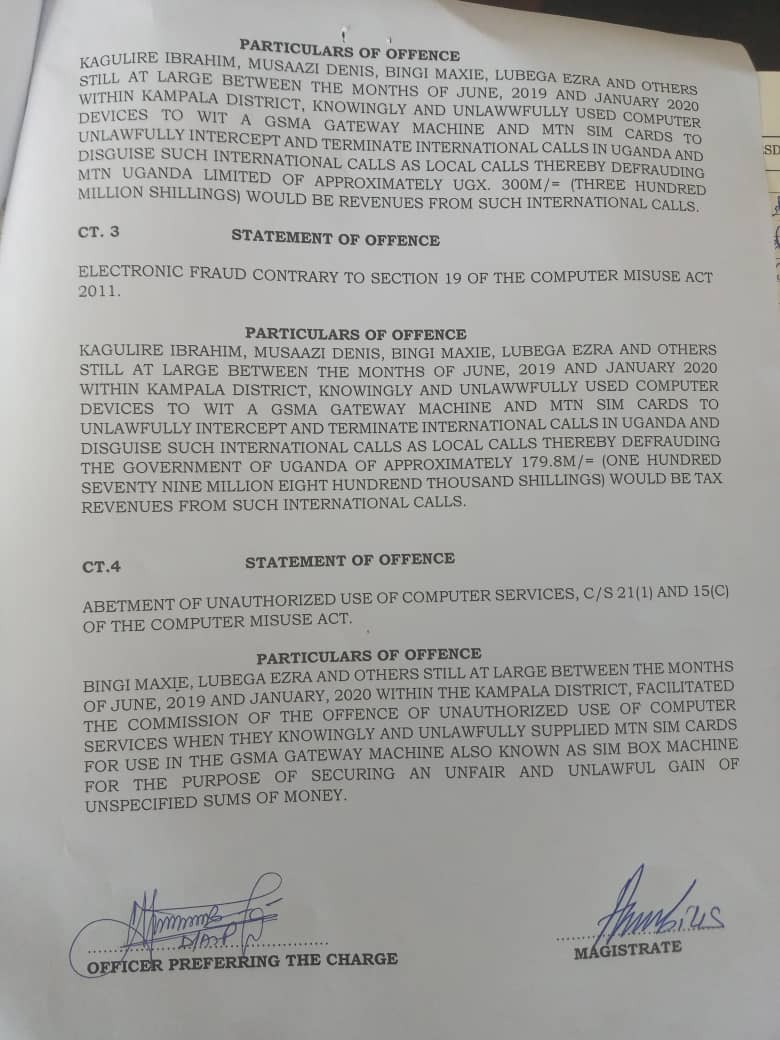 What is SIM Boxing?

In telecommunications, SIM boxing refers to the act of a person or group of people setting up a device that can take in several SIM cards (a SIM box) and using the same to complete international calls received from the Internet as voice over IP (VoIP). The calls are in turn diverted to the in-country mobile network subscribers as local traffic. As such, the SIM boxer bypasses international call rates and most likely undercuts the tariffs charged by domestic mobile operators.

To make a call from Europe to Uganda, a subscriber calls via their operator (e.g T-Mobile) through an International Gateway (e.g. BICS or TATA) which has termination agreements with operators in Uganda (e.g MTN or Airtel). When a phone call follows these steps, all operators involved – T-Mobile, BICS or TATA; MTN or Airtel, and the government, all get their due fees as determined in the various agreements and taxation laws.

However, SIM boxers have found a way around this arrangement. They are capable of diverting a call from Europe to be displayed on your handset here in Uganda as though it were emanating from Kenya.

The SIM box is also capable of taking advantage of any existing on-net (same network) voice bundles. This way, they end up paying very little or nothing at all for the termination of the said call, having disguised it as a local call.

As such, the operator in Uganda is cheated as they are not able to charge the phone call its premium international rate but rather the local rate or even zero rates in case purchased voice bundles are used. On the other hand, the government loses out on the charge levied on every international call per minute.