GALAMBA — President Yoweri Museveni has started a six-day jungle trek retracing the route his rebel forces took three decades ago on their way to power.

The opposition has described it as an expensive stunt ahead of elections next year.

Asuman Basalirwa, an MP from the opposition Jeema and People Power, slammed the trek as a “campaigning tool”.

“Ugandans deserve better than a president walking through a jungle. Time spent should be used for other important issues affecting the country especially how he plans to hand over power,” he said

The 6-day walk will end on January 10 and is expected to cover close to 195km from Garamba in Wakiso district to Birembo in Kibaale district and will now camp at 8 sites to celebrate freedom fighters heroic sacrifices for patriotism.

Flagged off Saturday morning from Wakiso district by Mr. Museveni, the team of largely youths and veteran politicians destined for Bukatira in Nakaseke district, the first first stop.

Museveni flagged off the 195-km historic trek code-named “Africa Kwetu”, loosely translated “Our Africa”, The Great Sacrifice from Galamba in the central district of Wakiso.

The president, dressed in full military combat, is leading the veterans, youths and well-wishers in the trek through the seven districts.

“The great trek started today and will last six days. This is a journey that the president is leading, a journey through the past to appreciate the present,” Museveni’s senior press secretary, Don Wanyama, said.

“The journey will take a week through the jungle, a route the liberators led by Museveni took to liberate the country.” 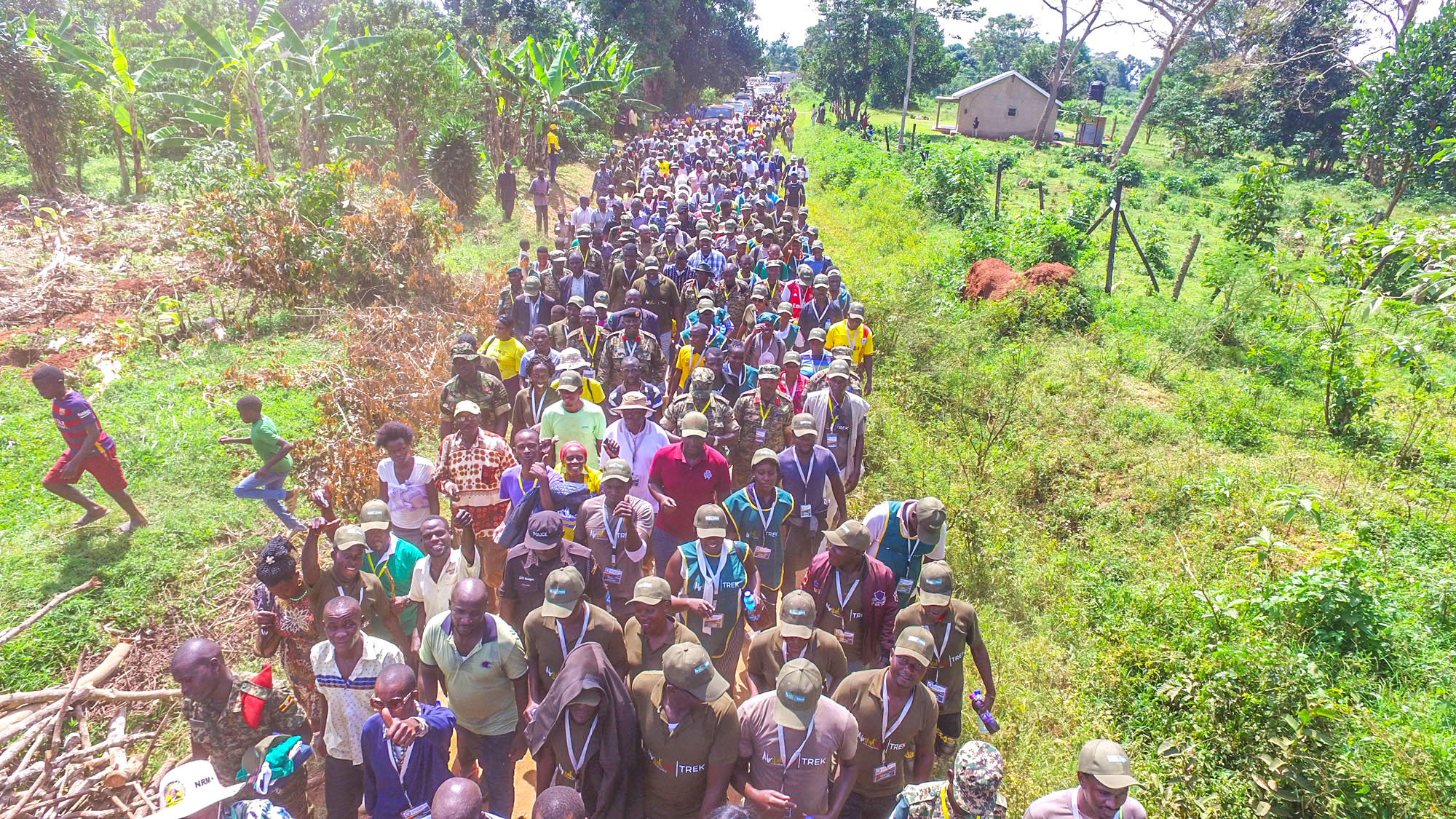 Saturday marks the first of six days of footslogging from Galamba in Wakiso to Birembo in Kibaale district, the end point.

It all started at Kololo Independence Grounds on Friday, where all the participants, grouped in platoons, assembled for preliminary briefing, before setting off for Wakiso at St. Edward Secondary School, Galamba, where they would settle in for the night.

President Museveni shared a light moment with the NRA bush war veterans at Garamba in Wakiso before he led the trekkers off to Birembo, Kakumiro district. The aim, he says is to re-trace the historical steps of Uganda’s 50-year liberation struggle.

He added that Africa Kwetu trek embodies the collective revolutionary ideals and values that defined the success of Uganda’s liberation struggle.

Most importantly, bush war veterans shared their experiences with young people to awaken the spirit of nationalism and Pan-Africanism.

During breaks at the various campsites, President Museveni and other veterans are scheduled to address the trekkers about Uganda’s liberation journey, with emphasis on the role of various organisations including The Front for National Salvation (FRONASA) and the National Resistance Movement, the Uganda Media Centre in a statement earlier.