Our own have left the stage at the infancy of their careers! says CDF Muhoozi as UPDF mourns fallen pilots

KAMPALA – The Chief of Defence Forces (CDF) of the Uganda Peoples’ Defence Forces (UPDF) Gen David Muhoozi has on behalf of the Force paid tribute to the two Defence Air Forces’ pilots who passed on when their Jet Ranger crashed during a training mission two days ago.

The CDF hailed the fallen pilots for their selfless service to the UPDF and the nation at large. He was addressing mourners during a requiem service for the Late Major Naomi Karungi at Church of the Resurrection, Bugolobi in Kampala.

Gen Muhoozi said that Maj Karungi had been loyal to her nation, Force, peers, family and very importantly, to Jesus Christ.

“Karungi, a Soldier of Christ, was a well trained and experienced lady pilot of the UPDF who was rightly placed in a speciality of her passion. The UPDF has made a double loss of comrades; Maj Naomi Karungi and Pilot Cadet Wakalu John Benon. Our own have left the stage at the infancy of their careers,” said Gen Muhoozi.

The CDF grieved with the families of the fallen pilots, the UPDF fraternity and the nation at large for the loss of persons he referred to as very resourceful citizens of Uganda.
“The Late Major Naomi Karungi specifically made a landmark for females who would wish to pursue the aviation career. I urge our pilots to follow in her footsteps,” the CDF said. He pledged support to the families of the fallen pilots.

He added that the Late Maj Karungi was highly experienced in her field and was a role model in the Uganda Peoples’ Defence Air Forces (UPDAF), breaking the male monopoly in the Service.

“The Late Karungi was able to do what men do and many times even better. By the time of her death, she held am important appointment of Squadron Commander of Augusta Bell Squadron in the UPDAF,” said Lt Gen Lutaaya, adding that the Late Maj Karungi was competent enough at her duties and she did what it took to perform her duties perfectly. He further said that due to her intelligence, patience and commitment, UPDAF identified Maj Karungi’s capabilities and entrusted her with command responsibility in the Service.

He counselled that the mourners should celebrate the lives of the fallen comrades. “When such occurrences happen, we are discomforted but we do not give up our mandate but rather gather to celebrate and uphold the good works of our fallen comrades,” said the CAF.

The Chief of Staff of the UPDAF (COS AF), Brig Charles Okidi represented the CAF at the requiem service for the Late Maj Karungi where he delivered the same message and added that the UPDF had many expectations on the fallen pilots. He said they were easy to train because they loved what they were doing.
The families of the deceased applauded the UPDF for grooming their children to positions of what they called important citizens. 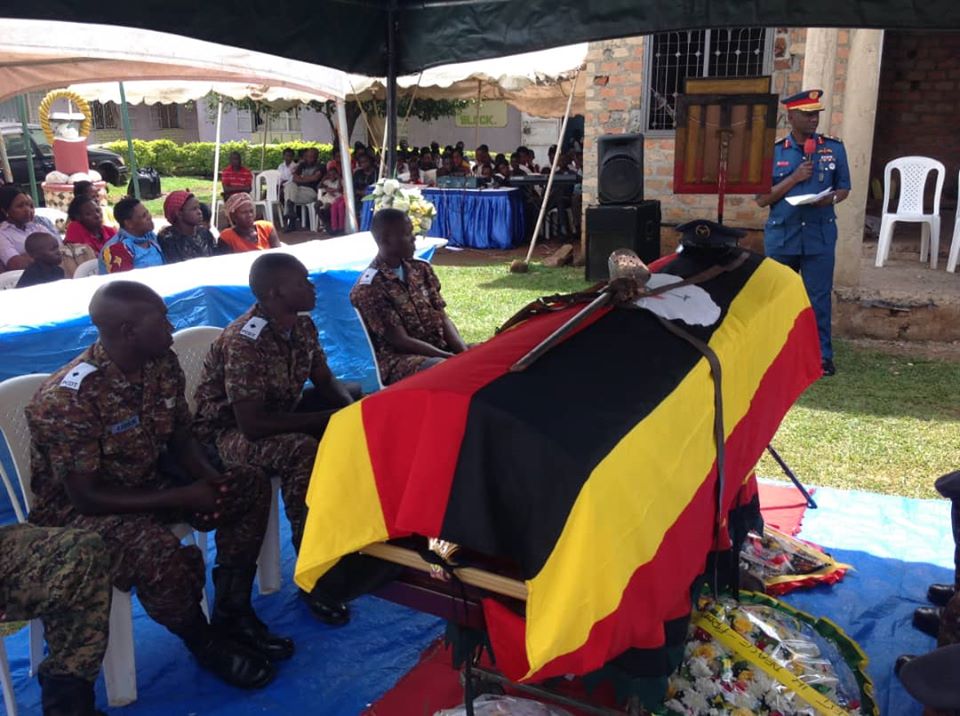 The family further appreciated the support the Force has offered since the accident occurred.
The Late Karungi joined the Forces in January 2004 and at her time of death had served for 16 years, 13 years of which flying.

The Late Pilot Cadet Wokalo John Benon was training to become a Captain on Augusta Bell Jet Ranger under the mentorship of the Late Maj Karungi.
The remains of the two Late Pilots were airlifted to their ancestral homes where they will be laid to rest tomorrow, January 31, 2020.