by JAVIRA SSEBWAMI | PML Daily Staff Writer
in NEWS, Tours & Travel
0 0
10
SHARES
324
VIEWS
FacebookWhatsAppTwitter
LAMU – Major airlines have suspended their service to Lamu’s Manda airport in Kenya on Sunday, after a botched dawn attack by Al- Shabaab militants and raised fears of a concerted militant campaign against the country’s airports.

In a statement on Sunday morning, the Kenya Civil Aviation Authority (KCAA) also said all inbound and outbound flights to Lamu’s Manda airport have been halted until further notice.

One of the airlines, Fly540, said in a statement that the attack had caused it to suspend flights to Manda airport “until further notice.”

Please note that Manda Airport- Lamu has been closed until further notice. All flights to and from are hereby cancelled”. 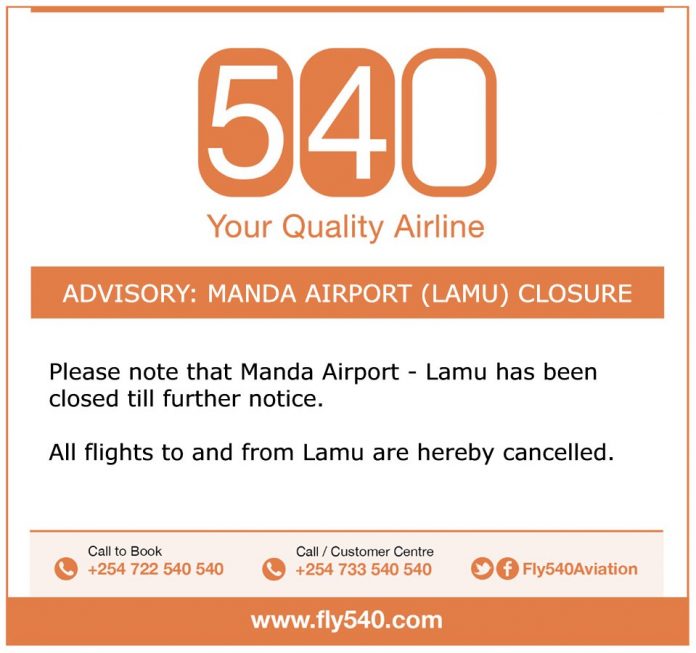 The other airline, Fly Skyward Express, said it had canceled all flights scheduled to land here and would make further decisions based on an assessment of the security situation.

“We regret to inform passengers travelling with us in and out of Lumu [airport] that the airport has been closed until further notice,” the airline said.

Kenya’s military said it killed at least four terrorists Sunday in repelling an attack on an airstrip located near a US military base.

In a statement, Kenya’s Defense Forces (KDF) said there had been an attempt to breach security at Manda Airstrip — which is near the Camp Simba US base — but it had been “successfully repulsed.”

“Four terrorists’ bodies have so far been found,” the KDF said in the statement. “The airstrip is safe.”

On Sunday, al Qaeda affiliate al-Shabaab claimed responsibility for an attack on Camp Simba, in Lamu County, near Kenya’s border with Somalia.

Al-Shabaab said the base was used by both American and Kenyan military personnel, and that US military equipment was “destroyed,” according to a statement released by the terror group Sunday. Al-Shabaab provided no evidence to support those claims. 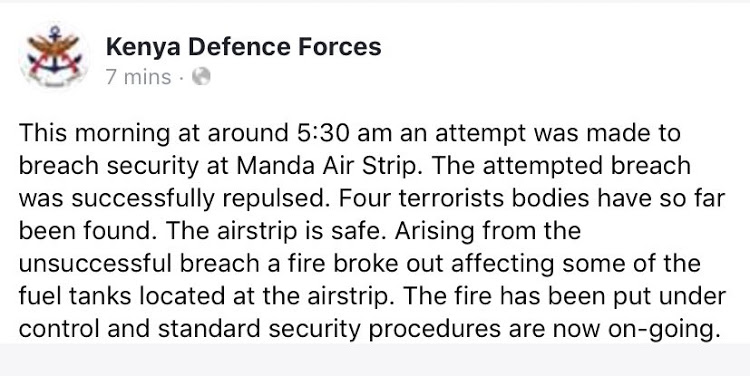 The airstrip near Camp Simba is also a tourist site frequented by Western visitors to Kenya.

A fire broke out as a result of the breach and affected some fuel tanks at the airstrip, although the blaze was put out, the KDF said.

US Africa Command — which is responsible for military relations with nations on the continent — also acknowledged the attack.

Al-Shabab has maintained a campaign of deadly bomb and gun attacks despite being ejected from their bases in the Somali capital, Mogadishu, and other areas years ago.