The two citizens – George Kyanzi and Joseph Asiimwe – through their lawyer of Muwema and Co Advocates also sued Kampala District Land Board, Nakivubo Stadium Board of Trustees, the Commissioner for Land Registration and Absa Bank, formerly Barclays Bank for authorizing the mortgage in March 2019.

According to the suit filed in the High Court Civil Division on December 4, the businessman under his Ham Enterprises (U) Ltd allegedly connived with Kampala District Land Board, Nakivubo Stadium Board of Trustees and the Commissioner for Land Registration to create leasehold titles on Nakivubo stadium, which is unlawful given that the stadium is public land.

“Sometime this year, the 2nd Defendant with the connivance and/or collusion of the 1st, 4th and 5th Defendants unlawfully created leasehold titles over the trust property and introduced the suit property in favour of the 1st Defendant (copies of the leasehold titles that were created shall be adduced at the trial),” court documents indicate. 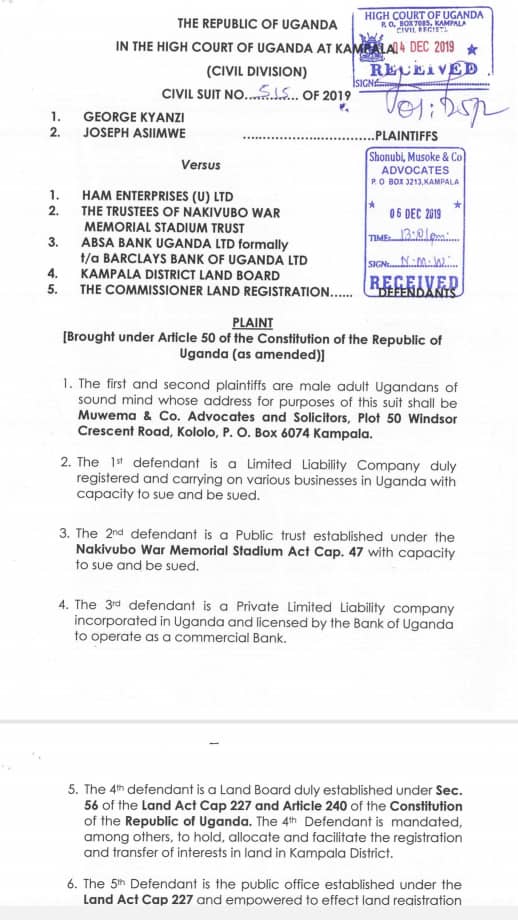 “Subsequently on 4th March 2019, the 1st Defendant acting in concert and collusion with the 2nd, 3rd and 4th Defendants illegally caused the creation of a mortgage over the suit property in favour of the 3rd Defendant to secure borrowing of $7,000,000 and the same was duly registered with the Registrar of Companies,” they add.

Mr Kiggundu was controversially given the tender for the redevelopment of Nakivubo Stadium and Park Yard Market in 2017.

But the plaintiffs accuse Nakivubo Stadium Board of Trustees of violating Section 8 of the Nakivubo War Memorial Stadium Trust Act, 1953, which prohibits them from leasing and/or creating a mortgage or other charge over the land.

“The defendants intentionally and deliberately created or caused the creation of a lease comprised in the suit property over public trust property for an unauthorized gain knowing or having the means of knowing that it was illegal and unlawful,” the court documents adds.

The plaintiffs claim that the defendants ignored the advice of the Solicitor General and went ahead to lease the land.

“The 2nd Defendant [Nakivubo Stadium Board]’s conduct of creating a lease over trust property went against previous legal advice given by the Solicitor General when he had authorized a Public-private agreement between the 1st and 2nd Defendants in respect of the suit property,” the suit says.

The two citizens want court to direct the Commissioner for Land Registration to cancel the lease and mortgage and direct the restoration of the suit property into the names of Nakivubo Stadium Board.

They also want court to issue a permanent injunction restraining Mr Kiggundu from developing and/or dealing with the trust property on the basis of the lease.

The law suit further throws the redevelopment of the stadium. Stadium works have stalled over the two years amid concerns that the youthful businessman lacks the financial muscle to develop it. In 2017, Mr Kiggundu presented to President Yoweri Museveni a proposed plan for refurbishment of the stadium but two years down the road, no works have been undertaken yet apart from a few excavations at the once-popular Nakivubo stadium.

Cabinet on Monday, December 9, resolved that the government takes over renovations and maintenance of the facility. Cabinet approved the Principles to amend the Nakivubo War Memorial Stadium Trust Act, 1953 to strengthen the legal framework for re-development and upgrading the Stadium to meet the required modern and Global Standards; to prohibit the Board from selling, leasing, disposing of or otherwise dealing in the scheduled (Trust) property or any part thereof (of it) as stated in the current Act; and to provide for robust and proactive stadium management by providing for and guaranteeing good Corporate Governance Principles.