KAMPALA – A security guard has sparked a major security alert after he shot himself dead inside the official residence of Rubaga Miracle Centre Cathedral’s Pastor Robert Kayanja in Ggaba.

Deputy Kampala Metropolitan Area police spokesperson, Luke Owoyesigyire, said the incident occurred on Boxing Day and that Police in Kampala are investigating the circumstances under which he shot himself and died on spot.

Owoyesigyire said the dead man is a security guard identified as Constable Bernard Wakuma, 30 who is thought to have taken his own life with his officially issued firearm. 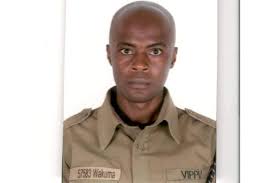 “We received information that Wakuma, a resident of Nsambya barracks and attached to VIPPU guarding at Pastor Kayanja’s residence in Ggaba committed suicide by shooting using an SMG rifle,” Owoyesigyire said in a text message.

He, however, clarified that Wakuma was a guard at Kayanja’s residence in Ggaba but not a personal security guard.

A weapon was found next to the body.

Pastor Kayanja was not present when his armed guard killed himself on Thursday.

No suicide note has been recovered and police is investigating whether he took the extreme step due to work pressure or any personal problems.