KAMPALA – Attorney General, William Byaruhanga has distanced himself from deal in which the government was to purchaze Shs30Bn land located in Nakasero saying his fellow directors took part in the tender without his knowledge.

Mr Byaruhanga made the remarks while responding to a request by Medard Lubega (Busiro East) who asked the Attorney General to explain why he shouldn’t be dragged to Parliament’s Rules, Privileges and Discipline Committee after dipping his hands in a government tender, contrary to rules that bar public servants from having conflict of interest. 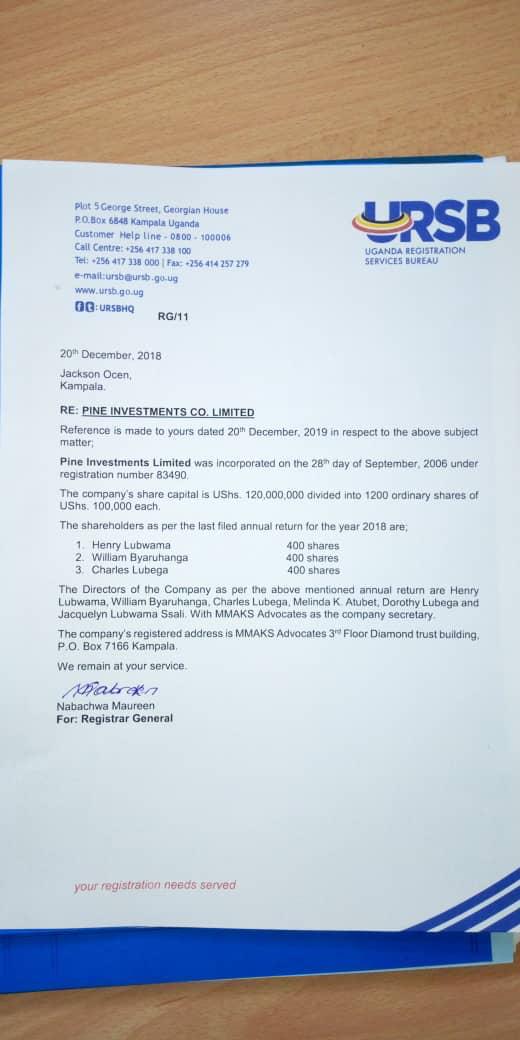 Lubega said, “I would like to ask whether it isn’t right for him (Attorney General) to justify to this House why he shouldn’t be taken to rules on seemingly unfair deal that the country. I am aware you asked the PM to investigate and report but this house has history on investigations conducted by Prime Minister and undertaking of Prime Minister which aren’t honoured.”

In response, Attorney General confirmed being a shareholder of Pine Investments Co Limited alongside Charles Lubega and Henry Lubwama with all directors owning each 400 shares.

Documents from the Uganda Registration Service Bureau indicated that the three are directors of the company alongside; Melinda Atubet, Dorothy Lubega and Jaqcquelyn Lubwama Ssali with MMAKS Advocates s their company secretary. The documents showed that the company was established on 28th September 2006.

The Attorney General said that two months ago, when the Ministry of Finance advertised for land for the construction of AfroExim Bank, he was in Netherlands when his colleagues expressed interest in the tender.

He said that as soon as he jetted into the country, he told the Secretary to the Treasury, Keith Muhakanizi to strike his company off the list, since it would amount to conflict of interest.

“There hasn’t been any influence peddling, I understand evaluation of bid is undergoing. As far as I know the evaluation process is still going on and the company in which I am director isn’t a participant,” said Byaruhanga.

The Attorney General’s remarks follow complaint by a whistleblower to Speaker Rebecca Kadaga who alleged that Pine Investments, a company owned by the Attorney General is being fronted to win the contract to sell 3 acres of land to the Ministry of Finance to construct headquarters of Afro Exim bank in Uganda.

According to the dossier, four companies including; Pine Investments Co which offered 2.2 acres near Nakasero Primary School at USD4 million approximately Shs 14.676Bn per acre, Vara Enterprise Offered 2.4 acres in Bugolobi with the company settling for $3.1 million equivalent to Shs11.366Bn while bid proposal for SGL proposed three acres at Kololo Lugogo bypass at USD2.7 million or Shs 9.896Bn.