KAMPALA – The Regional Director for East Africa at the Hunger Project, Dr Daisy Owomugasho has called CSO actors to embrace the Community-Led Development (CLD) approach as a mechanism of ending violence against children. In a panel discussion moderated by celebrated TV host, Patrick Kamara on the role of regional alliances in ending child marriage, Dr. Owomugasho said “When children become valued participants early during community dialogues, communities are more likely to draw on the lived experiences of girls and boys in identifying the key harms to children. When communities are ready to address particular harms to children, children become central actors in and leaders of the community-led action. If, for example, a community selects early sex as the issue to be addressed, it would be essential to have children playing a lead role in the community action since children are the key actors in sexual activities at an early age”.

While making a keynote speech at the same summit, The Netherlands Ambassador to Uganda, HE Henk Jan Banker, mentioned that he was honored to make a keynote address when Uganda was marking 16 days of activism against Gender-Based Violence (GBV). He further stated statistics on child marriages are alarming, 25% of the females marry before 20 years; 40% before 18 years; and 1 out of 10 before 15 years in Uganda.

“Every day you open a newspaper; there is a story on defilement.  Child rape can be a better word for defilement if we are to call a spade a spade”. The Dutch ambassador said. He called upon CSOs to reach out to the communities on the shores of Lake Victoria and step up their efforts since teenage pregnancies and child marriages jeopardize attaining SDGs 3 and 5, good health and wellbeing and gender equality respectively. He concluded by giving a quote to the girls present.

In 2015, a group of global non-profit organizations, led by The Hunger Project, came together to create the Movement for Community-led Development. It was launched on the same day as were the Sustainable Development Goals; as part of the leave no one campaign and meeting SDG Goal 16: Peace, Justice and Strong Institutions – build effective, accountable and inclusive institutions at all levels”,

Ever since, this group has built momentum around a belief: that communities should be in charge of their own development. According to Dr. Daisy, In addition to the global work, the Movement has national chapters in 12 countries, actively working with governments and other stakeholders to support devolution of power. The movement is aimed at covering multiple countries and/ by creating vibrant CLD chapters through which SDG Goals can be achieved by 2030.

Dr. Daisy says although many civil society groups share a commitment to empowering women and men as the authors of their own development, the prevailing development paradigm has focused on top-down, short-term narrowly-targeted projects.  As a result, there has been no collective discourse – no community of practice or evidence base – for the step-by-step process of mobilizing and empowering communities to set and achieve their own development goals.

“My main role in the Regional Director position is to enhance the movement for community development, by creating country chapters in the East African region in the countries of Burundi, Ethiopia, Kenya, Rwanda, Somalia, South Sudan, Tanzania, and Uganda. So far, we have running chapters in Uganda and Kenya; while Rwanda and Ethiopia are in the advanced stages of creating their own chapters”, she said 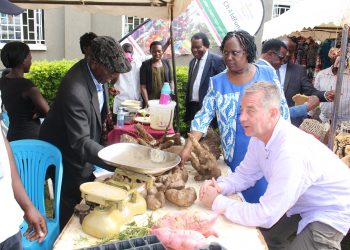