KAMPALA – Bloomberg, a global leading agency in business and financial data, news and insight has named Kyadondo East Member of Parliament Robert Kyagulanyi aka Bobi Wine amongst  15 people to watch in 2020.

“Born in the slums of Kampala, Wine (real name: Robert Kyagulanyi) sings about social justice and criticizes the government. In Freedom, he sings, “We’re living in a world similar to the one of the slave trade / this oppression is worse than apartheid.”

Each year, Bloomberg lists the 50 most influential figures world over, and name a few other people to watch for an upcoming year.

“[I’m] very pleased to be named amongst their 15 people to watch in 2020. As always, I do not take such recognition for granted. Neither do I claim all the credit because, without the support of friends like you, this would not be possible. As they have predicted, let’s take the liberation struggle even higher come 2020,” Bobi Wine wrote 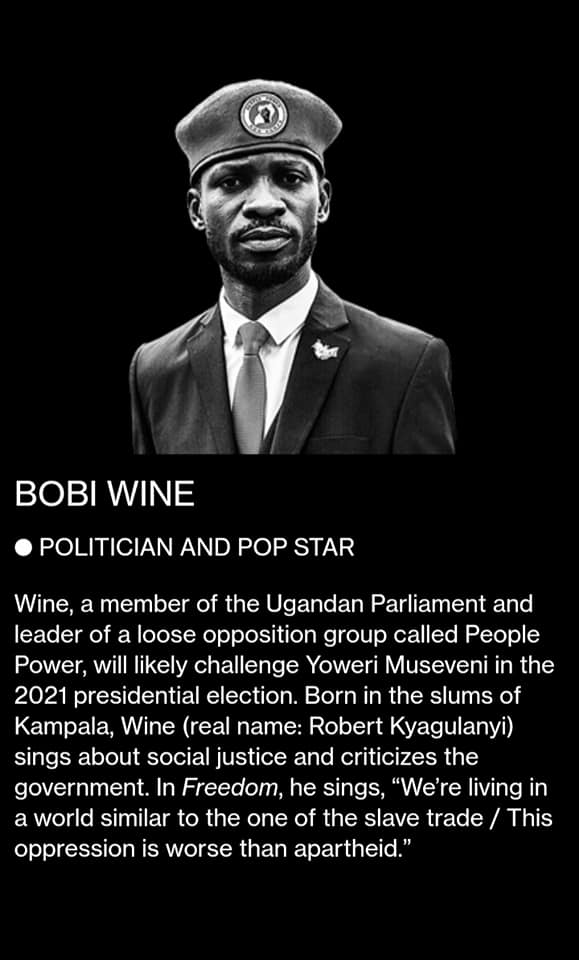 Bobi Wine was listed alongside 14 other people who are prime contenders to wind up on next year’s Bloomberg 50.

The singer turned politician was last month selected for TIME 100 Next list which is dedicated to spotlighting the leaders of tomorrow.

Bobi Wine was also named Male Politician of the Year 2019 by The Young African Leaders Summit (YALS) in Accra, Ghana.

This month, Bobi Wine who was in South Africa also received the Africa Freedom Award.