KAMPALA – The UPDF Chief of Defence Forces Gen David Muhoozi has launched countrywide documentation of reservists in a bid to build the UPDF Reserve Forces into a fully-fledged Service of the Defence Forces. This will enhance Reservists’ capability in the maintenance of peace and stability in the country.

Speaking at Silver Springs Hotel during the launch, the CDF commended the Crime Preventers and other members of the auxiliary forces for having always offered their service for the security of Uganda.

Gen Muhoozi said other Ugandans should also take interest in national security service as stipulated in the constitution. “All able-bodied Ugandans are duty-bound to come to service in the security of the country when need arises,” he said, adding that UPDF’s long term objective is implementing this constitutional requirement so that everyone can make his/her contribution in securing the country.

“We have forwarded documents to the respective authorities and institutions in respect to the fulfillment of this constitutional requirement,” said Gen Muhoozi.

The CDF stressed the need for patriotism rather than blending service to pay. He noted that, pay, comfortable accommodation and other benefits is the wrong formula for building a force. He said a force must be conscious of our enduring and guiding mission.

“Our center of gravity is force consciousness. That is what distinguishes the UPDF from other armies,” he said.

The CDF emphasized the need for national cohesion and maximum cooperation, through joint security, in the execution of national security tasks.

He stipulated the UPDF roles as complementary and not a competition. And, he reported that the joint effect of the coordination between the security forces in Uganda is great is good. The general said the end result of security service should always be total stability that leads to economic development and complete social transformation.

He called on the civil society to emulate the example of the security forces to foster national unity hence emphasising common interest as Ugandans and not individual identities in lines of tribes and the like.

The CDF commended the leadership of the UPDF Reserve Forces for mobilizing the reservists but cautioned that the registration of the reservists is not related to clearance of pensions backlog or for any form of payments.

The function was attended by leaders from the Districts of Central Uganda who are key in the registration process.

The leaders were briefed on the modalities of the registration process by the General Officer Commanding Reserve Forces, Lt Gen Charles Otema Awany.

The Resident District Commissioners who are the Chairpersons of the Security Committees are overseeing the process in their respective Districts whereas the Reserve Force Commanders are executing the registration at sub-county level. Police Commanders, Internal Security Officers, Local Councils meanwhile Coordinators of the former Crime Preventers verify their candidates.

Lt Gen Otema said since the mobilization began in October 2019, the leaders have been very supportive of the program. 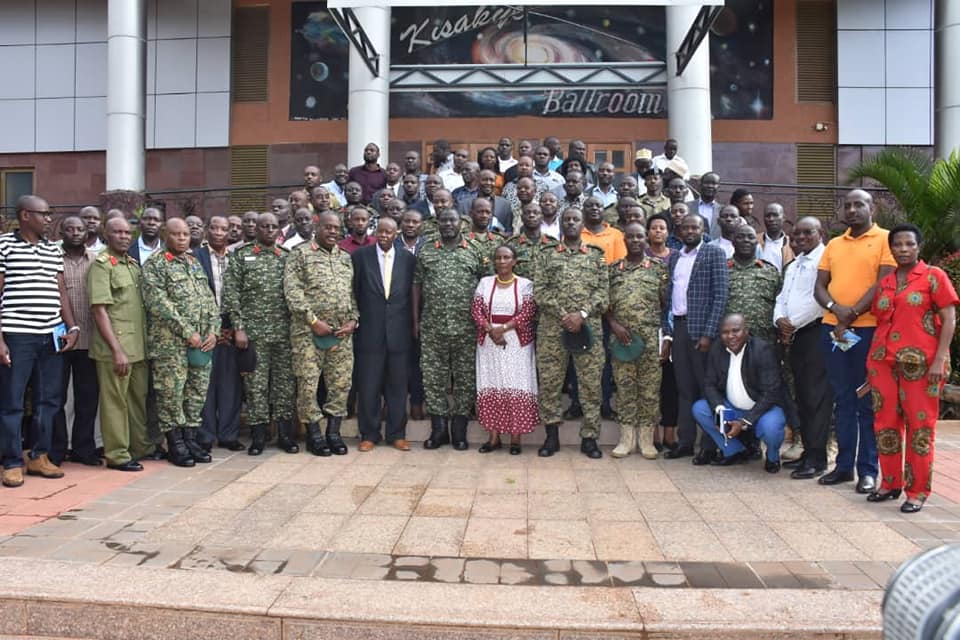 According to Lt Gen Otema, eligible persons for registration are honorably retired Officers and discharged militants of the Defence Forces and members of the auxiliary forces.

They include; former Local Defence Unit personnel and Crime Preventers as catered for in Sections 4 and 6 of the Uganda Peoples’ Defence Forces Act of 2005.

Those legible must be disciplined Ugandan citizens with no criminal records. Militants must not be more than 50 years of age and 60 years for Officers.

He emphasized that section 6 (1) (c) legalizes former Crime Preventers as members of the Reserve Forces being citizens of Uganda who have undergone military training under Article 17 (2) of the 1995 Constitution of the Republic of Uganda.

The registration of the reservists is an additional step in enhancing foundation security in the country and preparing a ready force that can respond to emergency situations or be readily available in time of need for special missions.

Today’s launch was attended by the Director of National Leadership Institute Kyankwanzi, Brig Gen David Kasura Kyomukama and the Deputy Commander of UPDF 1Division Brig Gen Joseph Balikuddembe, among others.