The President said the destruction of illegal firearms is one of the proactive measures being taken by the government to guarantee security and safety of its citizens and their property.

“It is worth noting that, seizing of ammunition illegally held, is one of the measures that we, as a country, are undertaking to ensure and sustain security in the country,” said President Kenyatta.

He said the action is being conducted in line with the regulatory frameworks; and various regional and international legal instruments on the management of small and light weapons, to which Kenya is a signatory.

Kenya’s history of publicly burning illegal firearms, which dates back to 2003, is in respect to several United Nations (UN) commitments to eradicate the trade in small arms and light weapons.

The commitments include the UN Firearms Protocol of 2001, the Arms Trade Treaty of 2013 and the Sustainable Development Goals of 2015 among others.

The President said Kenya is among the strongest proponents of international action to address the proliferation of small arms and light weapons and that the destruction of the firearms is an indication of the country ‘s commitment to strengthening regional and global peace and security.

He said the government has streamlined gun licensing system in the country and advised Kenyans who wish to own firearms to follow the laid out procedures.

“Through the Firearms Licensing Board (FLB), we are now progressively overhauling the system, making it more effective and efficient.

“Our ultimate vision is to have background checks processed 24 hours a day, 7 days a week, and monitor the activities of prohibited persons as far as gun ownership is concerned,” the President said.

The Head of State said the government has established a digital register of all civilian firearms holders and issued them with smart licenses.

“It is now easier to retrieve their details, thus facilitating investigations into violent crimes involving guns across the country,” President Kenyatta as he warned non-compliant firearm holders of stern actions. 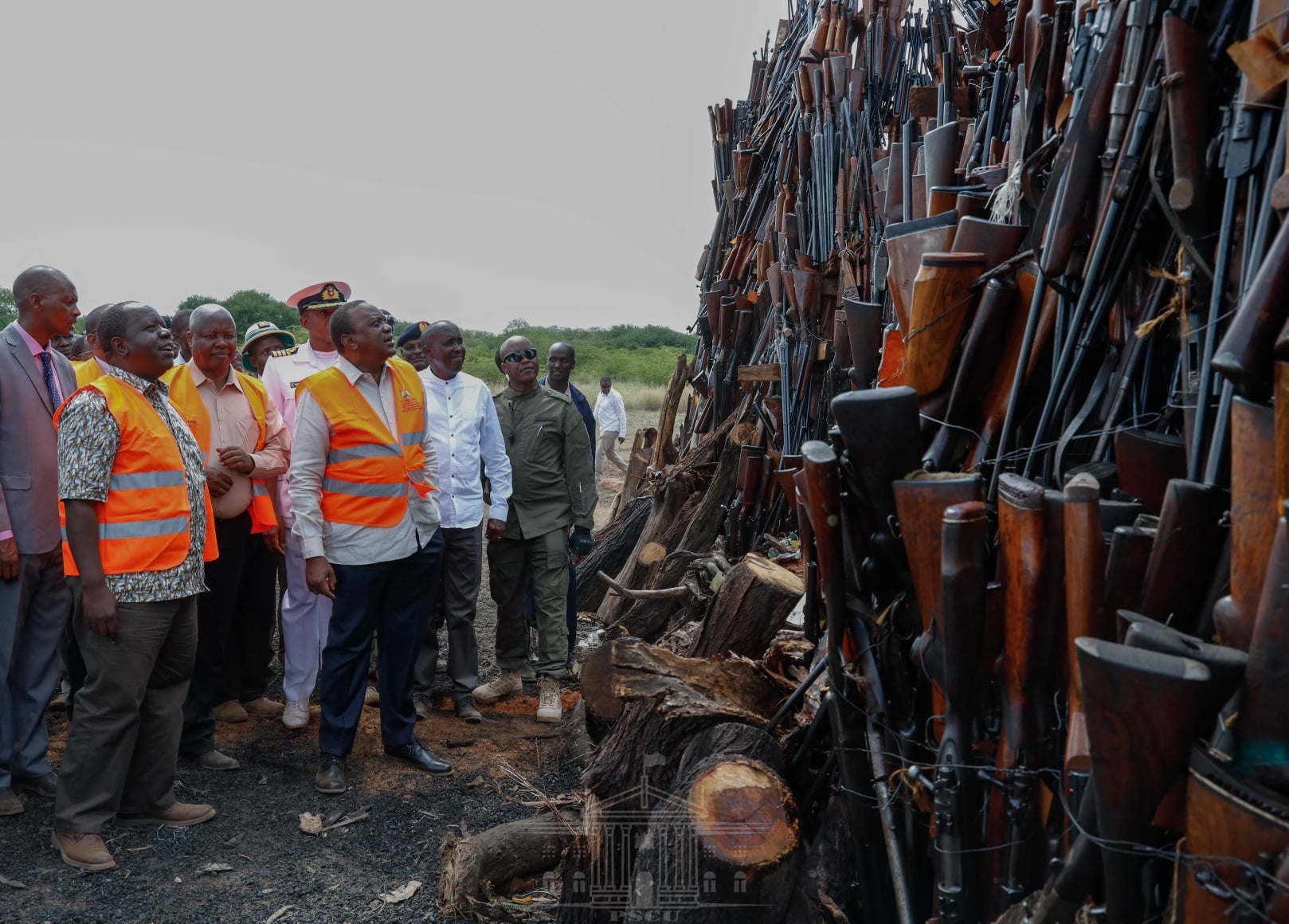 The President assured that the government is determined to end banditry activities amongst pastoral communities saying cattle raids and related criminal activities have for far too long compromised peace, stability and development in parts of the country.

He urged community leaders and elders to work together with government agencies in ensuring that illegal weapons are surrendered to relevant authorities so as to create an atmosphere of peace and security needed for development to take place.

“I encourage members of the public to also recognize that now times have changed. We will no longer be engaged in political discourse of cultural acceptability in activities of banditry.

“The only thing we will work together is to see how we will bring it to an end by working together with community leaders, politicians, young men and women, to surrender illegal weapons” the President said.

Interior Cabinet Secretary Fred Matiang’i, who also spoke at the event, said security agencies have successfully been carrying out an aggressive operation to mop up illegal arms across the country in the last few months.

He said the mop-up campaign has led to the retrieval of 50 firearms from the North Rift region as well as 71 guns and assorted ammunition from Marsabit County.