BUGIRI – The Speaker of Parliament, Rebecca Kadaga has requested the President to fulfill pledges he made to women groups in Bugiri during the last election campaigns.

Kadaga said this at the launch of the Agnes Taaka Foundation in Bugiri on Saturday 23. The foundation is created based on the theme, ‘No Woman Should Die While Giving Birth’ and is a brainchild of Bugiri Woman MP Hon Agnes Taaka that is used for skilling young girls and women to help them create their own employment.

Kadaga said that the President ought to fulfill the women’s pledge of shs50 million since women are among people who are left of in the development process.

“I am going to follow up with the President to make sure he gives us this money; he will surely give it to us since he made the promise,” she said.

Kadaga applauded Taaka for the work she is doing towards developing and raising the standards of women in Bugiri district.

She said Hon Taaka’s commitment towards the mothers and their children, while using her own money was a sign to show that she is working for the women in Bugiri.

“I am happy when I see that Hon Taaka has invested her money to train and also procure an ambulance which will help for transportation to hospital,” she said.

Kadaga added that the government should support the ladies because they play a big role in the development of society.

“Women are the ones that carry society so if they are left to without anybody caring society will not be fully developed,” she said.

Hon Taaka said she embarked on the foundation after seeing the poor condition of women in Bugiri district.

“The youth of this area were unemployed and the mothers were dying due to maternal related problems which was to deter prosperity in Bugiri,” Hon Taaka said.

She added that as a foundation, they were going to record all pregnant women at parish level and make follow up on them till they have deliveries.

She added that the foundation will also train young people and help them to startup businesses to enhance their incomes. 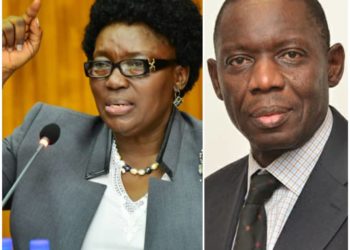