Force can’t solve anything! Catholic Bishops hit out over brutality of students, journalists during Makerere strikes

KAMPALA – The Catholic Bishops have condemned what they described as excessive use of force to quell the students’ demonstration at Makerere University.

In a statement on Friday, November 8, the bishops under their umbrella body, the Uganda Episcopal Conference said the use of soldiers to beat up students and some journalists during the protests over the 15% fees increment policy was uncalled for and violated the human dignity.

“We, the Catholic Bishops of Uganda, gathered at St. Augustine Institute in Nsambya, Kampala, for our Plenary Assembly of November 4 – 8, 2019, would like to express our concern on the manner in which some security agents have handled some recent demonstrations in the country,” reads in the statement signed by Mityana Diocese Bishop Joseph Anthony Zziwa, also chairman of Uganda Episcopal Conference.

“We strongly believe that the level of brutality exercised and the amount of force used by some security agents while arresting the demonstrating students of Makerere University, the journalists and opposition political groups, was uncalled for and violated the human dignity. As people of Uganda, we should be mindful of Article 24 and 44(a) of our national Constitution, which mandate all people including security personnel to respect human dignity. The same constitutional provisions guarantee the right to protection from inhuman and degrading treatment by prohibiting any forms of torture or cruel, inhuman or degrading treatment or punishment,” the statement adds. 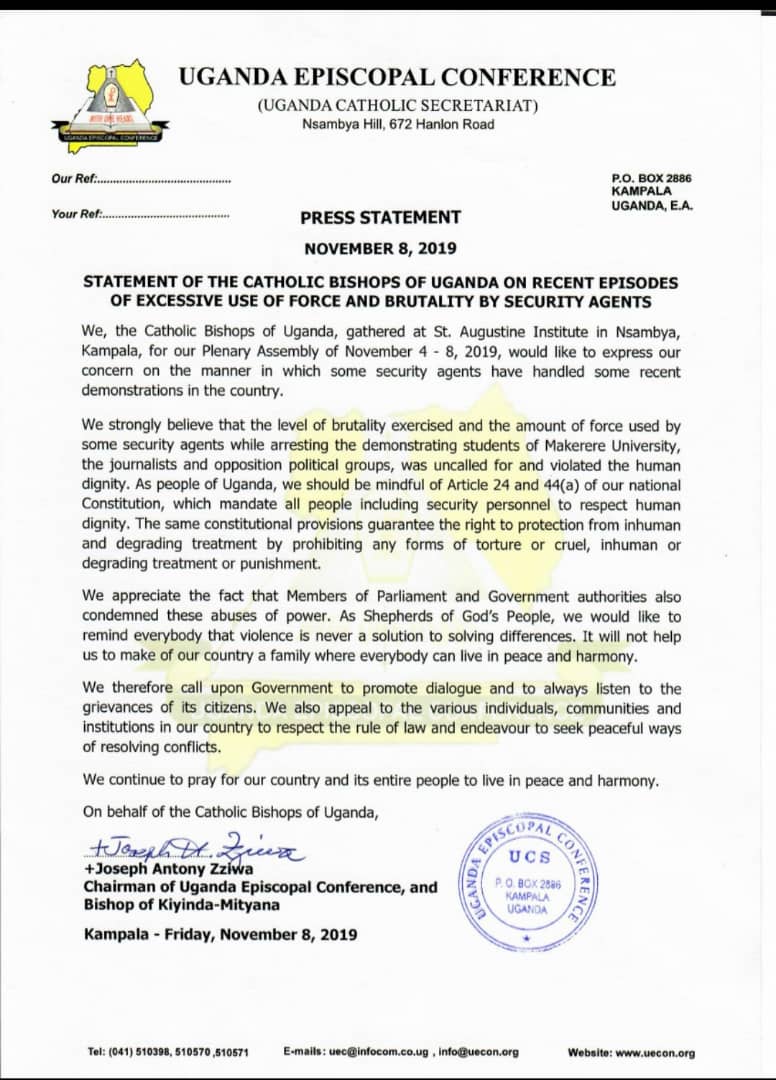 The Bishops said violence is never a solution to solving differences and called for dialogue.

“We appreciate the fact that Members of Parliament and Government authorities also condemned these abuses of power. As Shepherds of God’s People, we would like to remind everybody that violence is never a solution to solving differences. It will not help us to make of our country a family where everybody can live in peace and harmony. We, therefore, call upon Government to promote dialogue and to always listen to the grievances of its citizens. We also appeal to the various individuals, communities and institutions in our country to respect the rule of law and endeavour to seek peaceful ways of resolving conflicts.  We continue to pray for our country and its entire people to live in peace and harmony,” the statement adds.

Schools not ready to open – MPs

ICT Ministry, Swedish Embassy to hold webinar on role of media in electoral process during a pandemic