KAMPALA —The Minister of State for Higher Education, Dr John Chrysostom Muyingo, is in the spotlight after a teacher petitioned the Director of Public Prosecutions (DPP), accusing him of victimization and witch-hunt after him allegedly exposing a case of examination malpractice at a school owned by the former, PML Daily has learnt.

In a petition dated November 15 and filed by his lawyers, MS Alliance, the teacher, Mr Richard Okello, claims that he tipped off the police to arrest two teachers of Seeta Junior School, who he claims to have found sharing a leaked PLE exam on their mobile phones and teaching it to pupils.

“Our client informs us that on or about the 5th day of November 2019, in the recently concluded PLE, he was appointed as an Examination Scout and he was working under the team led by Commissioner CID Administration, Richard Mwesigye,” the petition to the DPP reads in part.

“That in the course of executing of their duties, they carried out several arrests of teachers involved in PLE Examinations malpractices and in, particular the following schools were afflicted:- Seeta Junior School, where they arrested teachers Ekaju and Odeke. They were arrested by Commissioner Richard Mwesigye on a tip off from our client_ the mobile phones recovered from these teachers, showed that they had circulated the leaked examination on the WhatsApp platform to several schools, including Global Junior Mukono, Mukono Junior School, Shiloh Prim, School, Jinja to mention but a few These teachers were arrested while teaching pupils the exam of the day. 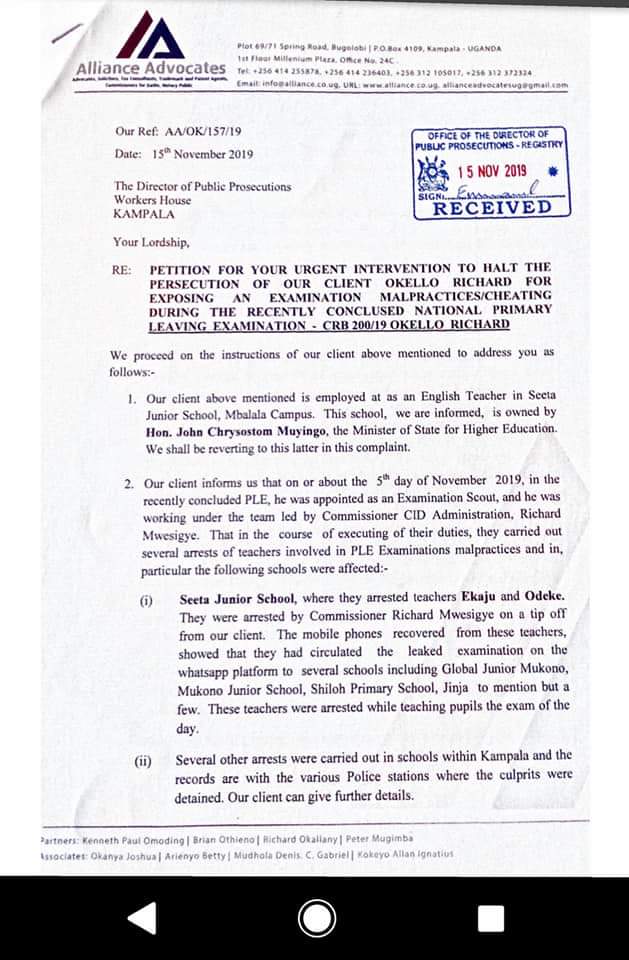 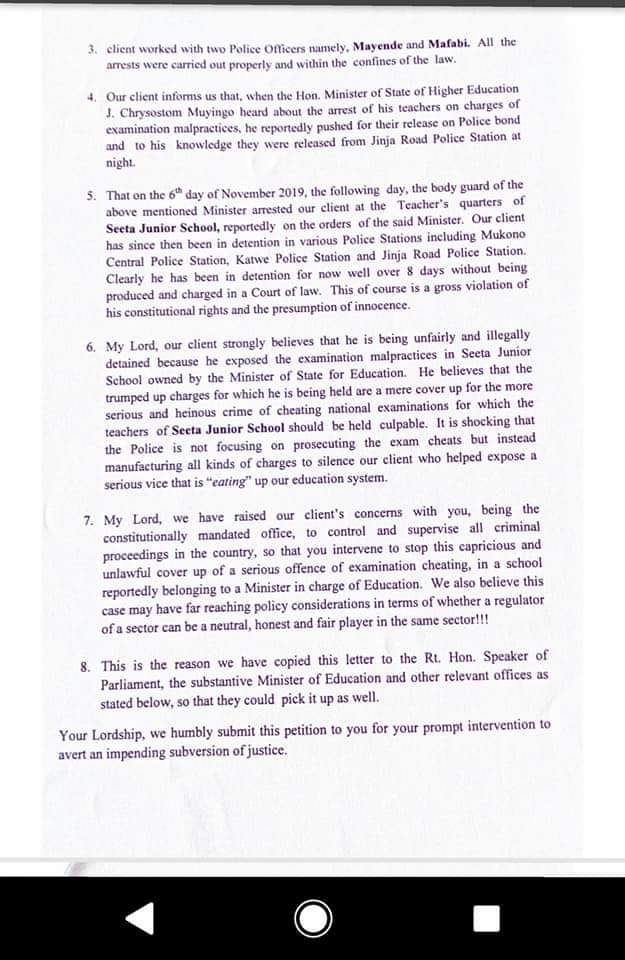 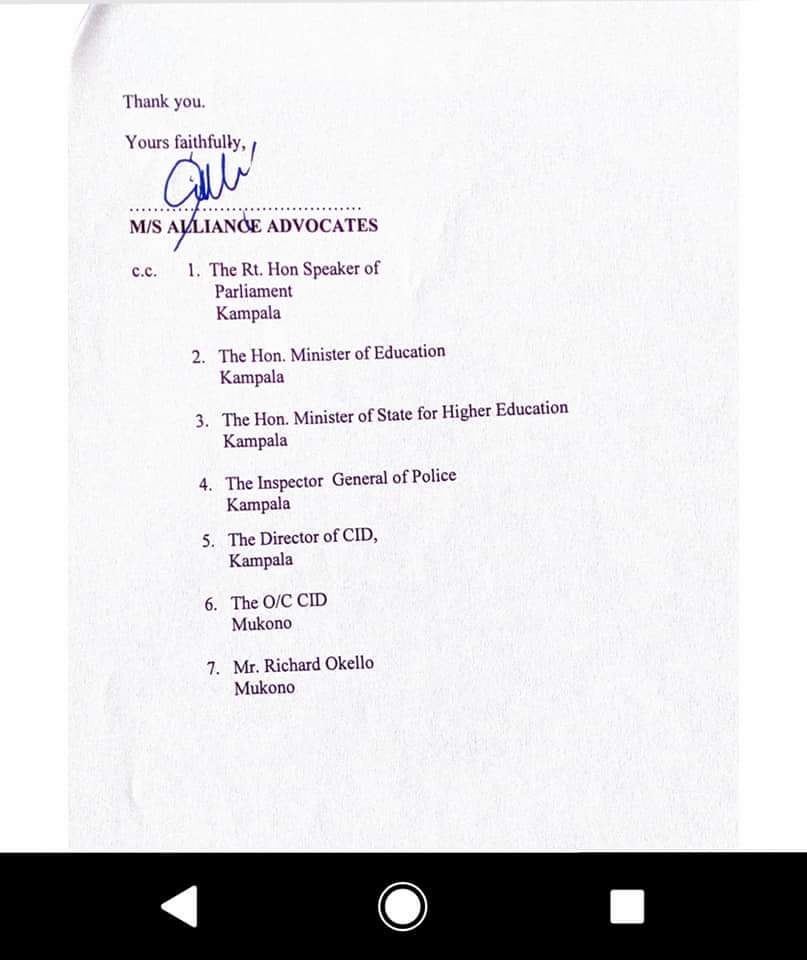 The teacher claims that despite the teachers being arrested by police in accordance with the law, Mr Muyingo, using his office, caused the released of the suspects.

“Our client informs us that, when the Minister of State of Higher Education J. Chrysostom Muyingo heard about the arrest of his teachers on charges of examination malpractices, he reportedly pushed for their release on Police bond and to his knowledge they were released from Jinja Road Police Station at night,” the petition adds.

The lawyers claim that after the release of the teachers engaged in the exam practice, Dr Muyingo, using his body guard, arrested Mr Okello and has been in detention without any charges being preferred against him.

“That on the 6th day of November 20I9, the following day, the body guard of the above mentioned Minister arrested our client at the Teacher’s quarters of Seeta Junior School, reportedly on the orders of the said Minister,” the petition reads.

The lawyers in the petition urge the DPP to reign in on the minister, whom they believe is abusing his office

“My Lord, our client strongly believes that he is being unfairly and illegally detained because he exposed the examination malpractices in Seeta Junior School owned by the Minister of State for Education,” the petition reads in part.

“He believes that the trumped up charges for which he is being held are a mere cover up for the more serious and heinous crime of cheating national examinations for which the teachers of Seeta Junior School should be held culpable. It is shocking that the Police is not focusing on prosecuting the exam cheats but instead manufacturing all kinds of charges to silence our client who helped expose a serious vice that is “eating- up our education system,” the petition adds.

The lawyers question whether with such alleged behavior, there can be fairness in the education system.

“My Lord, we have raised our client’s concerns with you, being the constitutionally mandated office, to control and supervise all criminal proceedings in the country, so that you intervene to stop this capricious and unlawful cover up of a serious offence of examination cheating, in a school reportedly belonging to a Minister in charge of Education. We also believe this case may have far reaching policy considerations in terms of whether a regulator of a sector can be a neutral, honest and fair player in the same sector!!!”

The petition is copied to the Speaker of Parliament, the Minister of Education, the Inspector General of Police Kampala, the Director of CID and the 0/C CID Mukono.