RUKUNGIRI – The beginning of the Uganda Certificate of Education Exams in Rukungiri this morning suffered a setback in all centres due to an early morning downpour.

The distribution of materials and papers at Rukungiri Police Station to the 18 schools started at 8:48 am and ended at 9:10 am, meaning the first paper started after the set time, which is 9:00 a.m. at all centres.

The chief UNEB scout Maricial Sempijja said all the schools received necessary materials there was no shortage of material on day one of the exams.

“We have got all necessary materials needed for the first paper in this centre and the little delay was due to the bad weather and the number of materials to be distributed on the first day,” he said.

Sempijja said the schools near the distribution centre would start at 9:20a.m while the furthest would begin at about 9:30am.

At St. Josephs’ Katojo the Head Teacher, Paddy Tuheisomujuni said a total of 148 candidates were registered but three haves since dropped off and 145 candidates were expected to sit for UCE.

The Head Teacher Makobore High School, Arthur Agaba said 38 candidates were registered for this year’s exam, one died and the 37 will sit the exams.

Robert Mbasa of Rukungiri High School said all 134 registered candidates are ready to sit for the exams while Nyabitete SS and St Gerald’s SS have 103 and 198 candidates respectively.

Govt to probe schools that reject students over poor performance 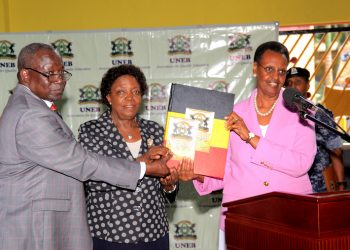