He is back! Thousands welcome Kenzoback to Uganda

ENTEBBE – Business on Entebbe Road came to a standstill on Tuesday as thousands struggled to catch a glimpse of artiste Eddy Kenzo as made a grand entry to the country having spent a few weeks away.

The artiste, who has been making headlines after splitting with his wife Rema Namakula, drove atop an open roof Ranger Rover sport as he made his way to Kampala.

He donned a tunic, a Muslim cap and shades as his security detail followed closely behind.

Earlier, the airport was clammed by hundreds of his supporters who stood waiting and when he arrived, they jumped on boda bodas and into personal cars as they followed his motorcade. Several boda boda riders were driving ahead and when police tried to stop them by impounding their bikes, Kenzo stopped his convoy and demanded that they be freed before he could resume the drive. To this, the police obliged and the convoy continued.

The road from the airport was packed as Kenzo’s entourage snaked through, allowing the musician time to bask in his glory. 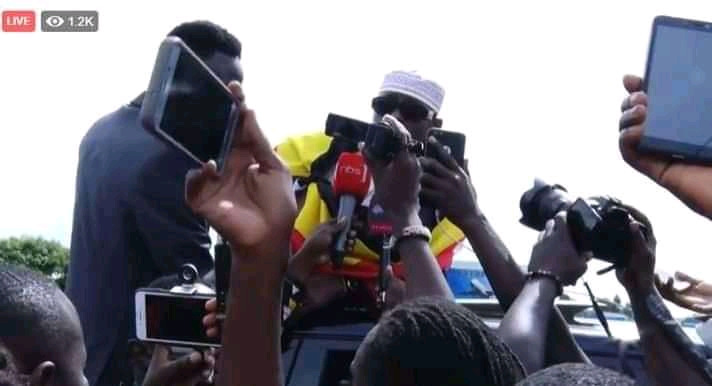 It has been an emontional last couple of weeks for him. This triumphant break could not have come at a better time.

He was later on scheduled to hold a press conference.

Dr. Besigye: Erias Lukwago can make a good president of this country

How new Coffee Bill passed by Parliament will affect farmers