Do you own Uganda? Public erupts over First Son’s warning against Uganda’s enemies

KAMPALA – The  public has expressed mixed reactions to a warning by First son, Lt. Gen. Muhoozi Kainerugaba, that whoever plans to mess with Uganda will have a bad day.

Gen on Monday, October 14, 2019, Tweeted: “I can assure whoever even thinks of messing with Uganda will get a very bad day. Long live UPDF! Long live Ugandan Special Forces!”

The tweet was attached by photos of the UPDF officers in the bush showcasing what they can do best.

The comment has since generated a lot of mixed reactions.

Danny M. Ssematimba wrote: “At first you told us Uganda is not a monarchy state. Now such words from you show us something different, I’m of the view that it would be better if you went in Ankole Obugabe and utter such.”

Sonko Gregory said: “So Uganda is another Dynasty?  Oba who told these fellas mbu the problems of Uganda are to be solved by a certain family.”

Segy Alex: “He talks like the late Gaddafi’s sons……… let us hope he gets to learn a one or two things from them.”

Lwanyaga Rovans Alex said: “For you think because it was written as For God My country. Then it meant your country. No it’s everyone’s country.”

Kalerwe Bwaise Katwe added: “I am now scared to comment, this guy is very tough more than his father, that blind man and all NRM members will die with someone especially after discovering oil and diamonds.”

Hines Agaba said: “Define your intentions and not to warn ugandans as if the country belongs to one clan.” 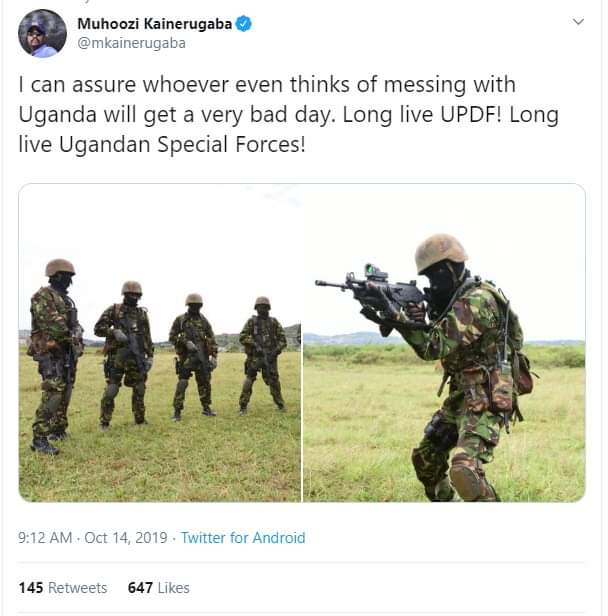 Abhay Bhai Ziraba Rugoosi  said: “We are in full support of the first son and the Commander of the SFC, where Uganda has reached there’s no turning back… We as citizens have an obligation of giving morale to our country defenders.”

Bymez Dickov said: “Eeeh, this is a worrying sign. He has now adopted the words of the Late Moatassem Gaddafi, son to the Late Muammar Gaddafi. Hehe, we now know where he’s headed.”

Frank Tumwebaze tweeted: “Is this message being sent to the citizens of Uganda or? Coz from the look of things, we the citizens are always treated like rebels. Any peaceful gathering and all of a sudden the army gets deployed like there’s an imminent attack from Al Shabaab.”