RUKUNGIRI – Four-time presidential candidate Dr Kizza Besigye and former Health Minister Jim Muhwezi sat next to each other at the burial of Veronica Oburungi Buhenda, the mother of Rukungiri Woman MP Betty Muzanira, in Rushasha, Nyakagyeme, Rujumbura in Rukungiri district on Sunday.

Veronica passed on at the age of 86 and several FDC leaders from Southwestern Uganda attended to comfort their colleague, Ms Muzanira and her family.

Muhwezi was in attendance since the area is in his constituency which he wishes to claim from the FDC MP come 2021.

Several Catholic priests were present to say Mass for Veronica on her final journey to eternity.

Rev Fr. Nuwahereeza Christopher Kitooma, the main celebrant, said religious leaders must step in and guide or they see their faithfuls perish.

“We have Jesus’ manifesto to implement and it instructs us to liberate His people. If God’s children are suffering at the hands of bad leaders, children cannot go to school, people are starving in a country of plenty and someone demands that I Fr. Kitooma should keep quiet, I reject that threat. I will not keep quiet”, Fr. Kitooma said.

Quoting from Pope John Paul II, he said “If the Gospel does not address the situation of the people; if it doesn’t answer and solve their problems; if does not speak their language, it is irrelevant.”

“For example, in this country, the situation is bad; our girls are exported into sex slavery abroad; there is corruption and theft of public funds; high murder cases; and I tell you things are okay, then I am irrelevant. Our duty as Priests is to fight for the interests of the people. People in this country may make their laws (humans laws) but we should never contradict Devine law,” Fr. Kitooma stated.

“Brethren, money is evil. Money is the reason our Constitution was violated to remove age limit and term limits. We need a gift to our country: parties don’t matter at all, because they come and but a good and enduring Constitution serves the people of Uganda. Isn’t it true People’s President Kizza-Besigye? We need someone to restore term limits, age limit and we have a proper Political Transition”, Fr. Kitooma said.

Fr. Kitooma, who was transferred from Rwamagaya Catholic Parish in Rukungiri to Kishanje Parish in Rubanda this month, also decried the destruction of the education sector. 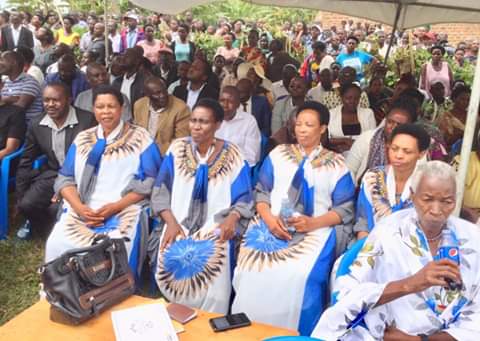 Fr. Elias Katsigeire, the Dean of Nyakibale Deanery, said an unnamed political group has invaded Rukungiri to fight critical and open-minded church leaders and demobilize people who are fighting to make their lives better.

“These groups of leaders have gone to the extent of paying some people to embarrass or harass religious leaders. Take it or leave it, we shall fight back,” he declared.

Fr. Katsigeire went as far designating priests to different Constituencies to “fight for our people and defend the Catholic church and Priests”.